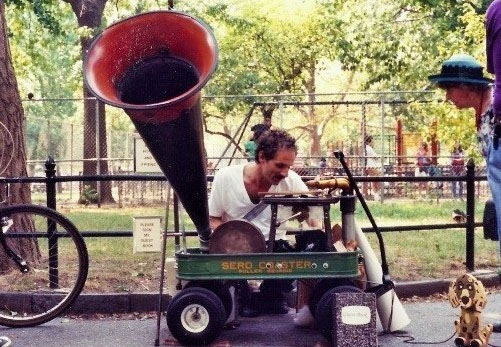 I came across Eric Byron's early phonograph memory after discovering his book "Crank Up the Phonograph." He has written a well-research book and clearly thought alot about the relationship and impact of recorded music in popular culture. Add to that his wonderful early memories about the phonograph and he has qualified, by definition, to be a Friend of the Phonograph.*

The following has been copied from his "About Me" section on his webpage.

"My Fascination with Early Phonographs and Sound Recordings" by Eric Byron

In the winter of 1957 when I was nine, my routine included watching Mr. Wizard, a science program for children. Several months earlier I had broken my leg badly and was now confined to a wheelchair in the house. On this day Mr. Wizard showed us how to make a phonograph from an Erector Set, a cone of poster board, and a hatpin. My father bought me the Erector Set before I was born. For some reason we had just the right paper, and since some hat styles in the 1950s required hatpins, I got one from my mother. Mr. Wizard made it clear I needed to use a 78 rpm disc. No other speed would do. Although my record collection generally consisted of 45s, which I played on my Alice in Wonderland 45 rpm phonograph, it just so happened that we either had or acquired 78s for the project. I dont remember.

The Erector Set phonograph worked and led to building and acquiring more electrical and acoustic machines. At times other interests displaced my love of the phonograph, but that love never completely disappeared. After experiencing another horrific trauma, this time the loss of both job and occupation in the middle 1980s, I built a gigantic acoustic machine. Mounted on a green 1940s childs wagon I had purchased in a Manhattan midtown antique store, the phonograph stood over six-feet tall. Without giving it much thought, I decided to drag all hundred or so pounds of Big Horn to Greenwich Villages Washington Square Park  a distance of at least a mile. A more perfect place could not be found. I continued carting it to the Park, generally on Sundays, for the next ten years.

Each week I took a selection of a hundred or so records, including popular works, jazz and opera. An audience made up of regulars, mostly older people, and people who just happened to be passing through the Park would quickly gather around the horn. Many stayed for hours. One couple spent the afternoon of their wedding day there. I never truly grasped the appeal it had for them and, if truth be told, for me. Nevertheless, I kept the machine cranked up and performed for hours. Before each selection, I summarized what I had learned about the recording. In the course of selecting and playing the records, I became very interested in what I was hearing.

Bake Dat Chicken Pie, was a triggering device. I had just gotten the record and was eager to play it. Alone in the house, I cranked up the phonograph and started to listen. I remember lifting the reproducer from the record part way into the recording. The lyrics so troubled me. However, Bake Dat Chicken Pie, along with quite a few similar recordings, made me appreciate that some incredible socio-anthropological material on the nature of ethnic/racial interaction might be collected. Crank Up the Phonograph: Who We Are and Where We Came From in Early Sound Recordings is the product of that investigation. 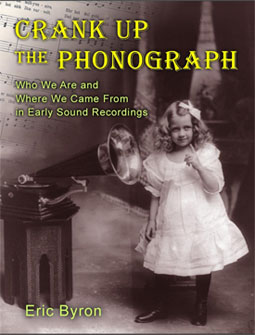 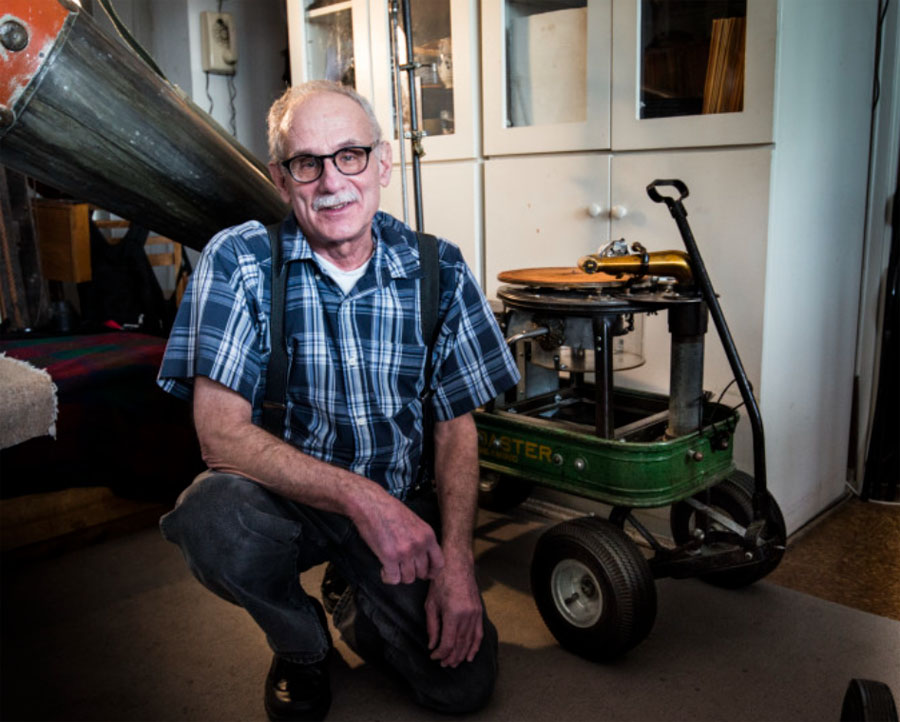 Note: Mr. Byron described watching an episode of Mr. Wizard as the source for his instructions on how to build a phonograph out of an Erector Set, poster board, and a hatpin. However, there was also an A. C. Gilbert Erector Set that included the pieces and instructions for making "a Real Working Record Player" (i.e., Gilbert's The Musical Ferris Wheel Set). "The Musical Ferris Wheel" Erector set is included in Phonographia's collection of toys for its connection with the phonograph. 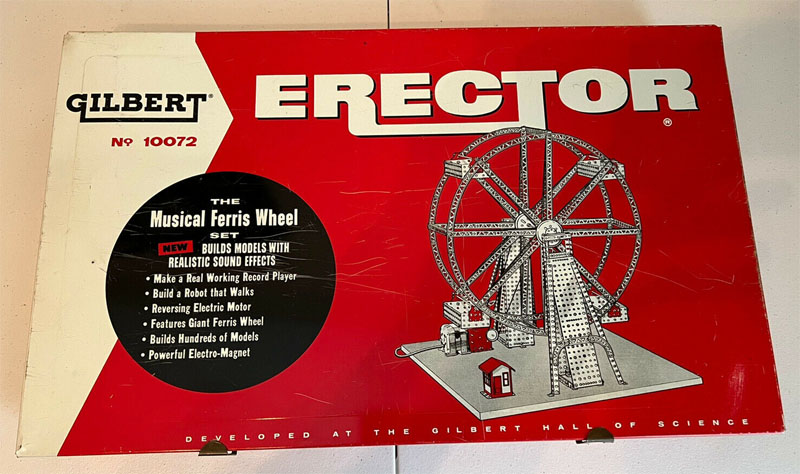 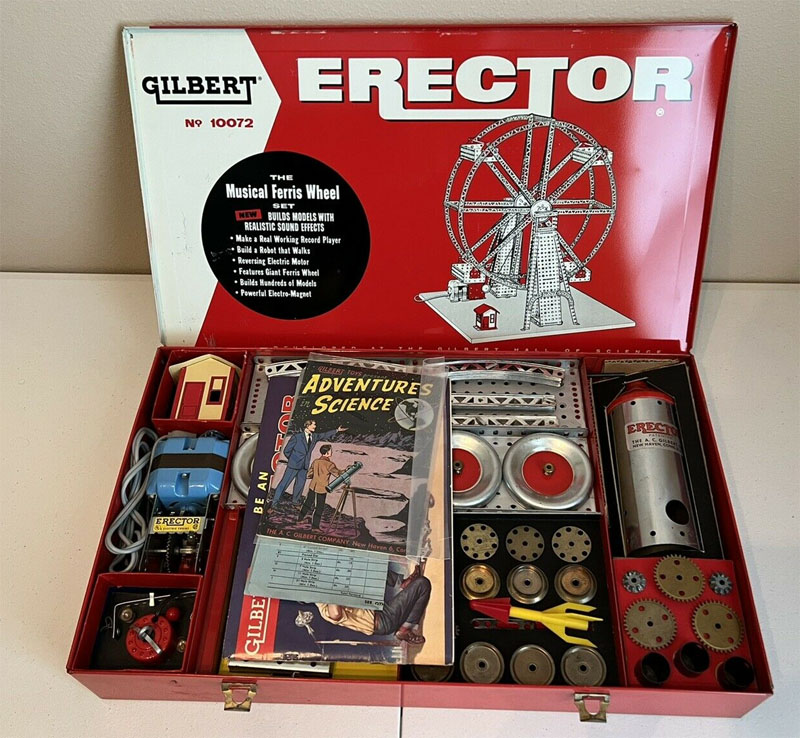 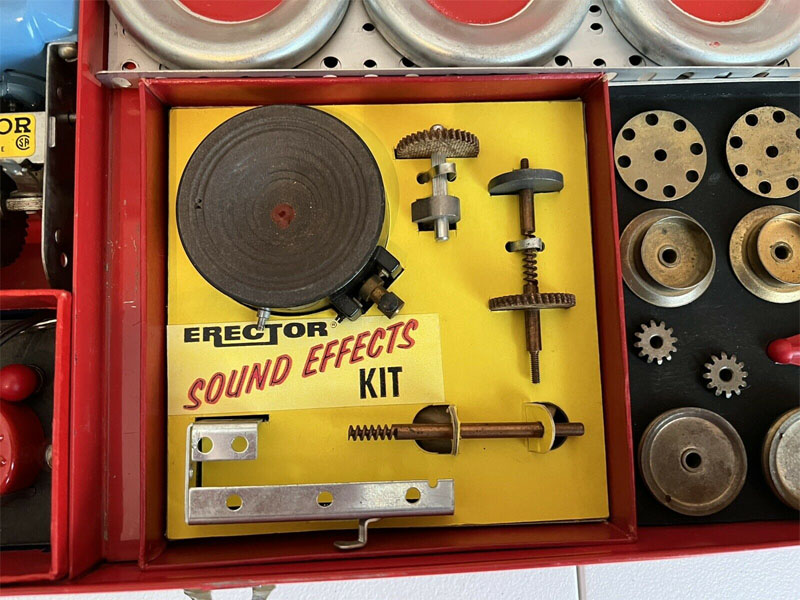