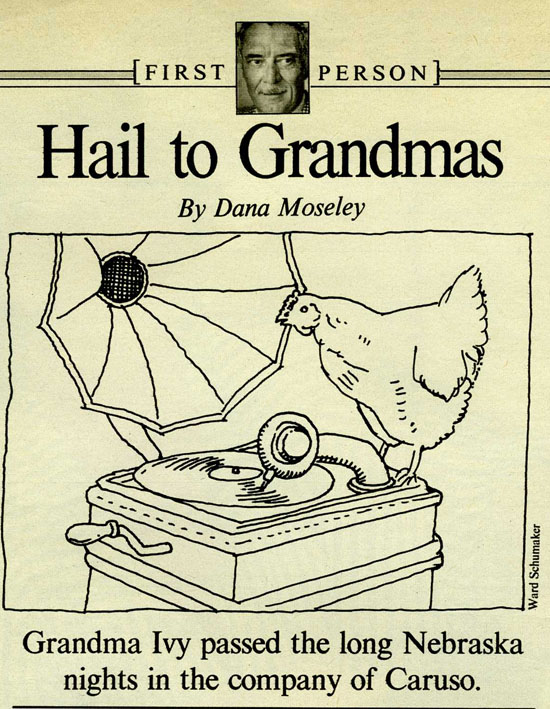 Memory of Grandma Ivy's Victrola and Fondness for Caruso

This memory and tribute to his Grandma Ivy was written by Dana Moseley. It's been added to Phonographia's PhonoLiterature bookshelf and to the Friends of the Phonograph's "Memories of the Phonograph" because of Moseley's references to Grandma Ivy's Victrola and records and her fondness for Caruso.

The following excerpt introduces Grandma Ivy and includes the phonograph connections of the story.

Grandmothers are the silent figures of history.

For all we know, Einstein may have picked up the first glimmerings of the Theory of Relativity at his grandmother's knee. In any event, she would never have spilled the beans. Women in those days were not pushy. But this is not to say they were content with their lot.

Would all those pioneer women, I wonder, have unprotestingly followed their men off into the wilderness if they'd really had a choice? What if there had been an equal rights movement in 1900? Would my grandmother, a free spirit in so many ways, have accepted with such docility her harsh fate -- uprooted from a pleasant home in Des Moines and carted off to try to coax a living from the Nebraska sand hills?

Docile she may have been, but was Grandma Ivy ever really resigned? The house my grandfather built on the prairie for his school-teacher bride had four rooms and the roof leaked. Visiting there on vacations, I remember even a modest drizzle kept her moving from room to room with an assortment of pans and chamber pots. The roof's flaws she endured with the same outward stoicism she displayed toward a plague of locusts or Grandfather's weakness for corn whiskey. What private fables she may have fashioned over the next 50 years to ease her discontent can be no more than a guess. Still, I find it tempting to speculate she nurtured the secret conviction that only a freak misdirection of fate had deposited her on that treeless plain instead of along the Tiber or the Thames.

This rather fanciful hypothesis might at least account for her curious approach to housekeeping. Stacks of magazines, books and old photos accumulated in corners like flotsam. A wind-up Victrola, acquired shortly after World War I, stood for three decades beside the kitchen stove where the men originally set it down. Above the Victrola, a framed picture of the Bay of Naples graced the wall, the single such adornment she ever got around to putting up. Someone once mentioned that before Grandfather there had been an Italian music teacher, although this may only have been a way of explaining her fondness for the records of Caruso which, with the approach of winter, she used to play late at night, perhaps to drown out the sound of the north wind blowing through the canyon.

Moseley's short story, as published, can be read HERE but since I grew up in Nebraska, experienced its weather and hail storms, and loved our family tradition of making home-made ice cream I've included this additional scene.

Even before the sky began to darken, you knew. There's the stillness. The animals notice it and grow uneasy. Then come the black, rolling clouds, a distant rumble of thunder. A twig of lightning touches the rim of the canyon. Then suddenly it's on you, before you can get it from the field. Rain. And more. Brother, those are hailstones hitting the barn!

The hailstorm itself seldom lasted more than ten minutes. I can still remember how the hail struck the roof with the roar of an avalanche, causing the rafters, the dog and me to tremble from beginning to end. No one ever spoke during a hailstorm. We were all too overcome by the wonder of it, as though God, for whatever vindictive reasons, had seen fit to hurl an omen directly to the heart of Keya Paha County.

And then the instant it ceased we all witnessed the astonishing transformation of Grandma Ivy. It was truly a sight to see. Suddenly shedding her habitual malaise, she leaped to the head of her brigade like an old West Pointer called to the colors in a national emergency. Issuing orders on the run, she was everywhere at once, snatching sheets off the beds, gathering raincoats, scraps of burlap, pieces of canvas. Back out into the elements we rushed, lashed by her barked commands. Seconds are precious when frozen jewels are slipping through your fingers.

Collected into improvised sacks, the nuggets were hustled onto the porch where the ice cream freezer was waiting. In addition to everything else, she had got the wood stove blazing, gathered the eggs and cream and made the custard. With divided forces now, one churning the handle, one pouring rock salt, another feeding in the dwindling pellets, we were already -- less than an hour after the first hailstone had stuck--moving toward the climax.

Looking back, I can't help wondering. Maybe all my grandmother ever really longed for was the excitement of a challenge. Had she been born 75 years later, who can surmise what outlet she might have found for her curiosity and energy?

As it was, she never even made it to St. Louis, let alone Italy. But her grandchildren did, and they are in agreement on one thing: You might take your patronage to the finest restaurants in Rome or Paris; you might overtip head waiters from New York to Hong Kong; you might become the confidante of master chefs in both hemispheres. Believe me, you would never experience the gustatory thrill of that first lick of the paddle on a sultry August afernoon when the prairie sky opened up and Grandma Ivy was ready.