Advertised as the World's First Animated Talking Toy, Teddy Ruxpin enjoyed great popularity in the late 1980's. Manufactured by Worlds of Wonder (WOW) in 1985, this amazing bear had a moving mouth and eyes that synchronized with his words. Built around a special cassette tape and playback system Teddy could also be connected to his octopede friend Grubby. Matching the words of each storybook, Teddy and Grubby spoke their lines and moved their mouths while other characters joined in on the soundtrack in over 40 adventures.

Was Teddy the world's first animated talking toy? One would have to say no, as Mattel's Animal Yacker series in 1964 (toys like Crackers the Parrot whose beak moved when he spoke or Larry the Lion whose mouth moves and talks when his pull string is pulled) fulfill the animated and talking toy criteria of that world's first claim. But certainly, Teddy was the first of its kind and combined with his popularity Teddy Ruxpin is a worthy member of the Talking Toy Hall of Fame.

For information about how Teddy works go to Vaughn Hangartner's site by clicking How TR Works (http://www.mindspring.com/~mathue/workings.html) 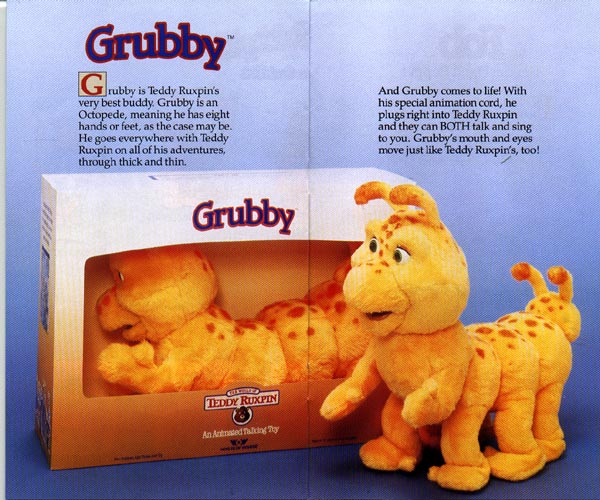 Teddy had ten outfits that could be purchased to dress him appropriately for his adventures. Five of the Teddy's outfits are displayed below ( Winter Outfit, Flying Outfit, Workout Outfit, Sleeping Outfit, Summertime Beach Outfit). Other available Adventure Outfits were: Hiking Outfit, Rain Outfit, Tuxedo, Santa Suit and a special order Doctor's Outfit. 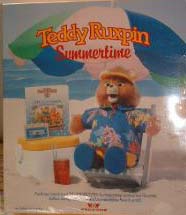