The Pixar movie Toy Story created two great talking toys: Woody and Buzz Lightyear. These obviously became highly marketable toys after the movie came out, drawing both on the characters in the movie and, in the case of Woody, the nostaglia of a pull-string toy. Though Talking Woody is advertised as a pull-string and his packaging features the classic "Try Me! Pull String at back" Woody does not contain the Chatty Cathy™ style record inside the doll. Instead, Woody is an electronic toy, operating on batteries. The voice of Tom Hanks is great. The look of Woody, dressed for Toy Story, Toy Story 2 and Toy Story and Beyond is great. And Woody keeps great company. All in all, this is a toy that has all of the character and qualities of a Talking Toy Hall of Fame member. As Woody talks, consider his "Howdy Partner!" the official greeting of the Talking Toy Hall of Fame. 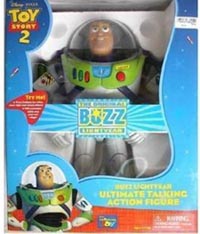 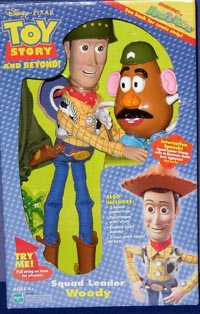