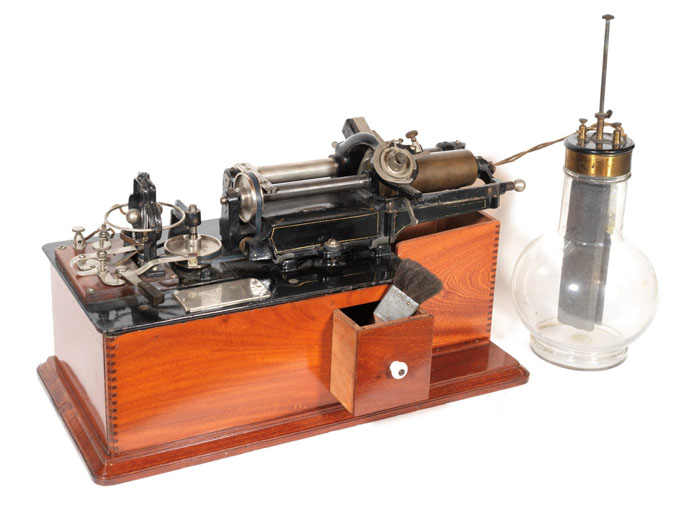 The Phonograph on the Side of Justice and Truth (circa 1891)

The following 1907 clipping describes a play on stage from some years earlier (circa early 1890's) which included a phonograph. The article starts by making the statement that the "phonograph upon the stage...is always found on the side of justice and truth, and rigidily opposed to the machinations of the villain. Many times the hero and the Edison phonograph have disconcerted the black-browed, cigarette-smoking scoundrel..." This play is noted as "one of the earliest perhaps of the kind, in which the phonograph dominated the entire play, and proved indeed a "god out of a machine."

Set in a little town of Provence, in the South of France, the writer of the play had been impressed by seeing the Edison phonograph at the Paris Exposition of 1889 and subsequently purchased a phonograph and with the aid of a friend wrote "a vivid drama to be performed at his little theatre."

The article notes that the "the play itself was not remarkable, except that it took the phonograph back to the 17th century."

The hero was terribly good, the villain execrably bad and the heroine a virtuous and pious maiden who supported an aged mother. The phonograph saved her from abduction in the first act, for as she was about to take a leafy lane leading to a friend's cottage, the phonograph, ingeniously placed in a tree and operated by unseen hands, cried out "Prenez-garde! Prenez garde!" (Beware! Beware!) Being a good girl, she took this as a message from heaven and fell on her knees gracefully, thereby frustrating the villain. The climax came when in the last act the two principle villains met at the village inn and selected a large room as the place in which to discuss their most diabolical and sanguinary scheme. Before commencing they went around the apartment, stabbing inoffensive draperies with their swords so that no concealed spy shoud hear them. Foolish men! If they had only gazed at the ceiling, where, amid the grimy oaken beams the phonograph was performing its virtuous work, they would never have been betrayed. As they had settled the last details, in rushed the hero, the heroine and the rabble. Folding their arms, polished insults on their lips, the villains denied everything. The hero took a ladder and brought the phonograph to view; he slipped a prepared record on it, and lo! the whole plot was made clear. It was found that the hero was of reality a count and the heroine defrauded out of her rights. The audience was enraptured..." 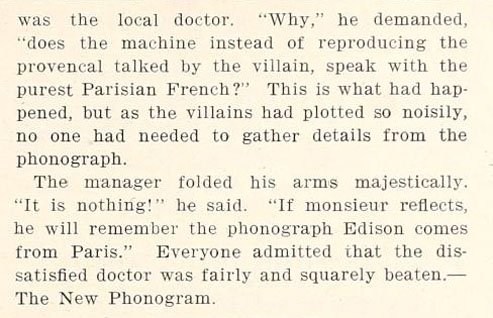 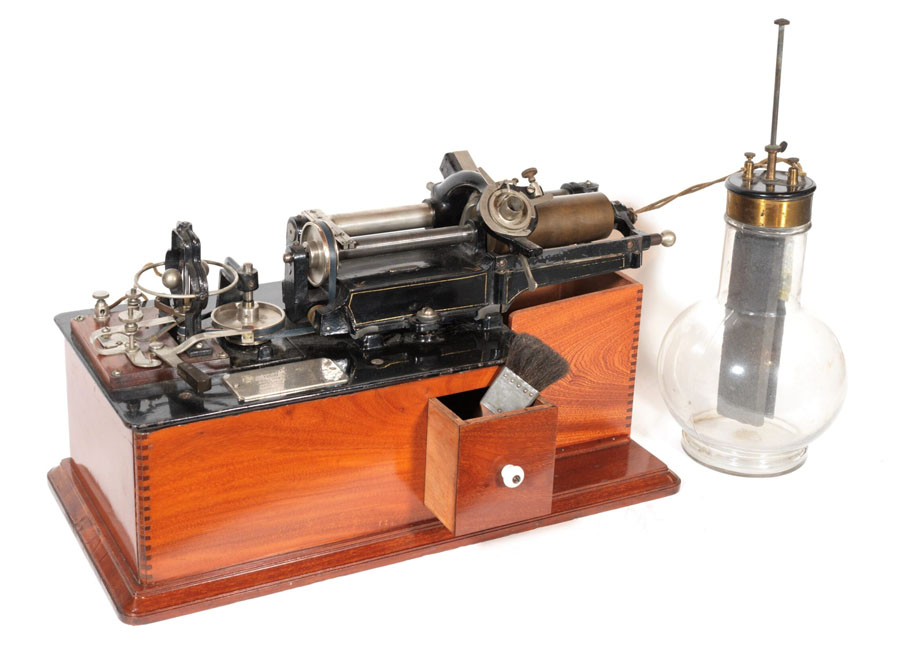 Edison Class M Phonograph by the North American Phonograph Co. circa 1899-1892. Edison referred to the Class M as his Perfected Phonograph." (Courtesy of TechnoGallerie)

FACTOLA: "The Judge," an English play in 1890 used a phonograph "to provide the sound effects of a crying infant from off stage." This is believed to be the first use of a phonograph in a supporting role of a stage play. (Source: "Edison in Hollywood" by Allen Koenigsberg, The Antique Phonograph, June 2016).