Gargantua and his son Pantagruel

How among the frozen words Pantagruel found some odd ones. 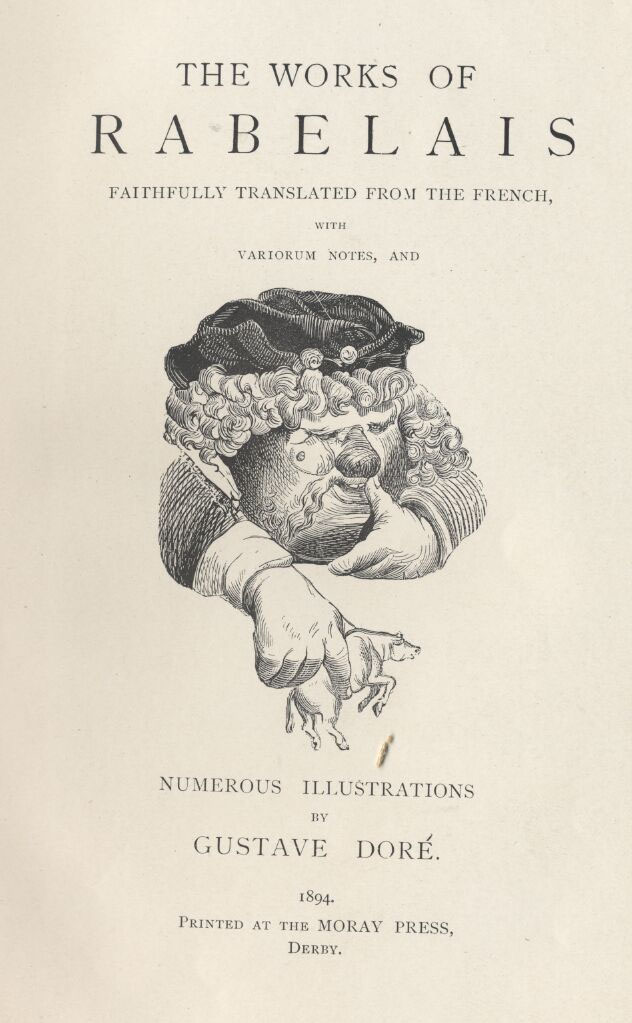 Daniel Marty in The Illustrated History of Phonographs noted that "Rabelais, in the sixteenth century, was probably the first to describe means of conserving speech and reproducing it later. It was reasonable enough for a writer to draw a parallel between the preservation of foodstuffs by cold and the preservation of words the same way." (1)

The following is what Rabelais wrote in Book IV, Chapter LVI of Pantagruel:

Chapter 4.LVI.How among the frozen words Pantagruel found some odd ones.

The skipper made answer: Be not afraid, my lord; we are on the confines of the Frozen Sea, on which, about the beginning of last winter, happened a great and bloody fight between the Arimaspians and the Nephelibates. Then the words and cries of men and women, the hacking, slashing, and hewing of battle-axes, the shocking, knocking, and jolting of armours and harnesses, the neighing of horses, and all other martial din and noise, froze in the air; and now, the rigour of the winter being over, by the succeeding serenity and warmth of the weather they melt and are heard.

By jingo, quoth Panurge, the man talks somewhat like. I believe him. But couldn't we see some of 'em? I think I have read that, on the edge of the mountain on which Moses received the Judaic law, the people saw the voices sensibly. Here, here, said Pantagruel, here are some that are not yet thawed. He then threw us on the deck whole handfuls of frozen words, which seemed to us like your rough sugar-plums, of many colours, like those used in heraldry; some words gules (this means also jests and merry sayings), some vert, some azure, some black, some or (this means also fair words); and when we had somewhat warmed them between our hands, they melted like snow, and we really heard them, but could not understand them, for it was a barbarous gibberish. One of them only, that was pretty big, having been warmed between Friar John's hands, gave a sound much like that of chestnuts when they are thrown into the fire without being first cut, which made us all start. This was the report of a field-piece in its time, cried Friar John.

Panurge prayed Pantagruel to give him some more; but Pantagruel told him that to give words was the part of a lover. Sell me some then, I pray you, cried Panurge. That's the part of a lawyer, returned Pantagruel. I would sooner sell you silence, though at a dearer rate; as Demosthenes formerly sold it by the means of his argentangina, or silver squinsy.

However, he threw three or four handfuls of them on the deck; among which I perceived some very sharp words, and some bloody words, which the pilot said used sometimes to go back and recoil to the place whence they came, but it was with a slit weasand. We also saw some terrible words, and some others not very pleasant to the eye.

Then we heard some large ones go off like drums and fifes, and others like clarions and trumpets. Believe me, we had very good sport with them. I would fain have saved some merry odd words, and have preserved them in oil, as ice and snow are kept, and between clean straw. But Pantagruel would not let me, saying that 'tis a folly to hoard up what we are never like to want or have always at hand, odd, quaint, merry, and fat words of gules never being scarce among all good and jovial Pantagruelists.

Panurge somewhat vexed Friar John, and put him in the pouts; for he took him at his word while he dreamed of nothing less. This caused the friar to threaten him with such a piece of revenge as was put upon G. Jousseaume, who having taken the merry Patelin at his word when he had overbid himself in some cloth, was afterwards fairly taken by the horns like a bullock by his jovial chapman, whom he took at his word like a man. Panurge, well knowing that threatened folks live long, bobbed and made mouths at him in token of derision, then cried, Would I had here the word of the Holy Bottle, without being thus obliged to go further in pilgrimage to her.