The Record by Ray Bradbury

The Record is a short story by Ray Bradbury first published in Ray Bradbury's Futuria Fantasia, Summer 1939 where it was credited only as by Forrest J. Ackerman.

The portable hand-cranked phonograph in this story and its record literally save the world from human extinction.

The first three pages are descriptions of a war and how it had raged for the last twenty-one years "destroying almost all of humanity."

"Finally, only one hundred humans remained alive, and they kept fighting."

When a phonograph is accidently discovered, however, and the record is played the fighting stopped. The lost art of music, after its long banishment, had been rediscovered and "music floated out over the tumbled ruins, descended to the ears of the other people. AND THE FIGHTING CEASED! They were transformed. They came running to crowd about the machine."

"And thus was mankind saved through a recordSONNY BOY!"

The following is from the last page of "The Record" with the text of the story describing how the phonograph and its music ended the war and saved humanity.

HEDRIK HUNSON was fighting with phosphorized fistshand inclosed in chemically treated gloves that burned as they struck the antagonist, insulated on the interior for the wearerwhen suddenly the two of them were caught by a spreader. The other man died instantly, but Hedrik got it in the side and was whirled about sickeningly, and survived.

He was lying painfully on something when he came to, but felt too dizzy and sick to move. At last, when his head had cleared a bit, he rolled over into a sitting position and reached out his arms to graspa phonograph!

Big things came in small packages in the days of 2171, and a portable phonograph might well be taken for a weapon of some sortwhich was exactly what Hedrik thought! And you can hardly blame him, because no one in that generation had ever seen one of the things. (p. 3)

There was a curious story connected with the dying of music, concerning the days of 2050 when there was a movement to stamp out all symphonies and songs and things even slightly sentimental.

Hedrik found the crank that wound the portable, turned it, reasoning that perhaps it gave powerand thenholding it away from himhe waited for rays to spurt out or something to explode. Nothing happened! Hedrik was disappointed. After an agony of perspiration and puzzlement he finally accidentally placed the needled arm onto the disk. The disk, he noticed, was black and filled with little undulations. The disk was like a wheelso Hedrik thoughtit should revolve like one, shouldn't it? He pushed the starter thoughtfully and was more than surprised when the disk started spinning.

From the phonograph came musicmusic and singing! The lost Art had returned! The Art banished under compulsion had made a comeback.

Some man was singing on the recordin a queerly interesting and familiar tongue, the ancient English. The singer seemed sad, almost crying. And Hedrik was thrilled as he played it over and over again, drinking in the new experience like wine on the lips of a connoisseur. The voice rose, fell, lingered. And Hedrik suddenly didn't feel like fighting anymore!

The music floated out over the tumbled ruins, descended to the ears of the other people. AND THE FIGHTING CEASED! They were transformed. They came running to crowd about the machine.

And there in that aged music shop they stood enthralledmusic filled their souls. It was exactly what they had needed and wanted for many years. And it had been denied them. Music was the balancing force the force that would help them struggle ahead rebuilding the world. And next time they would be saner they knew the lesson of luxury had been learned and learned well. Never again would they leave all of the work to the machines. Now they would work and sing and play.

It would be work hard work for some time to come. But they had found music again, and that would anchor them to sanity.

And thus was mankind saved through a recordSONNY BOY! (p. 4) 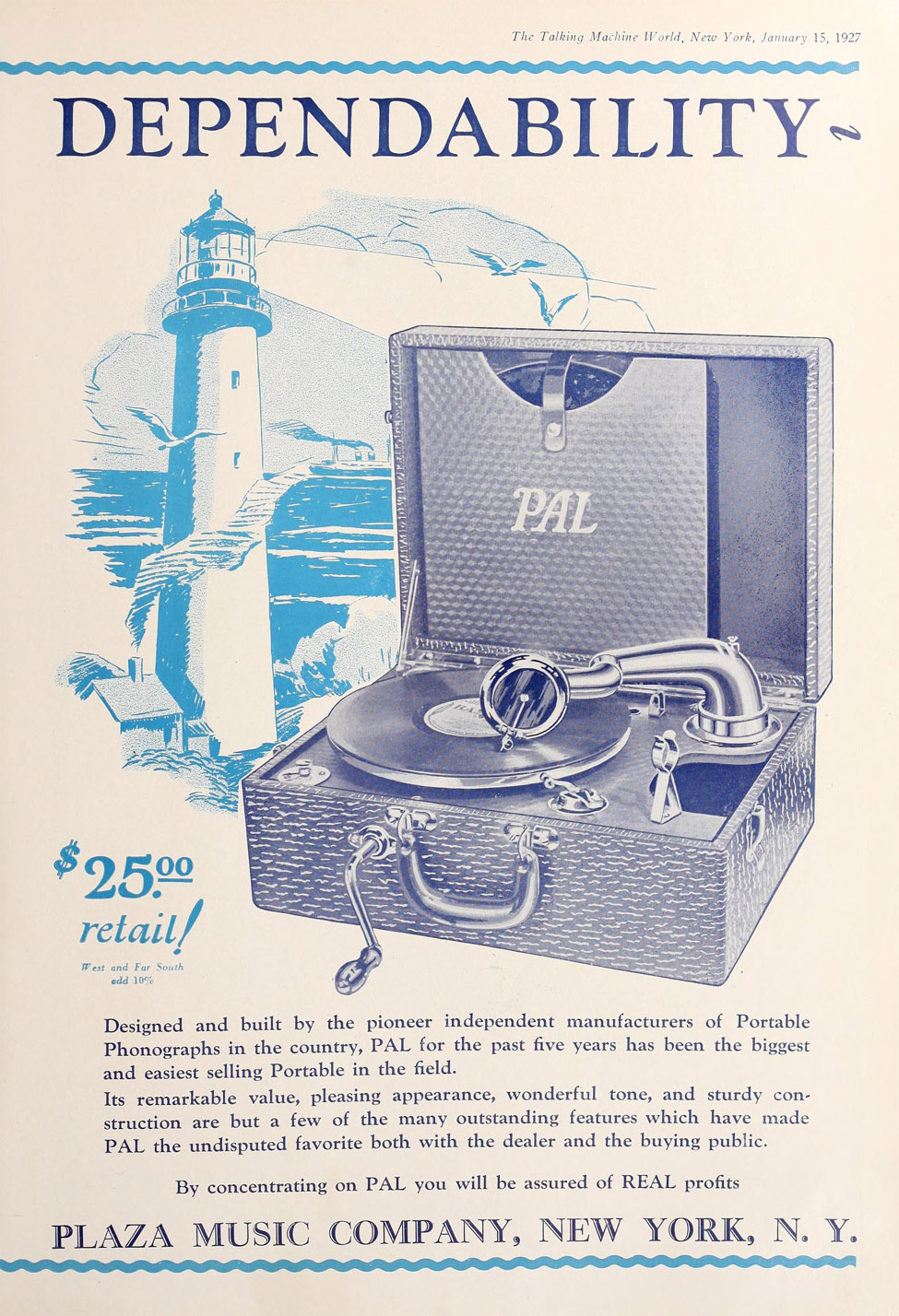 PAL, the oldest and best known Portable Phonograph in the country. The Talking Machine World, January 15, 1927

For other examples of advertisements for portable phonographs see Phonographia's Portable Phonographs.

The Record can be read in full on AmericanLiterature.com which is the source of this page's excerpts. Written cooperatively by Forrest Ackerman and Ray Bradbury, this story was first published in Ray Bradbury's Futuria Fantasia, Summer 1939 where it was credited only as by Forrest J. Ackerman.