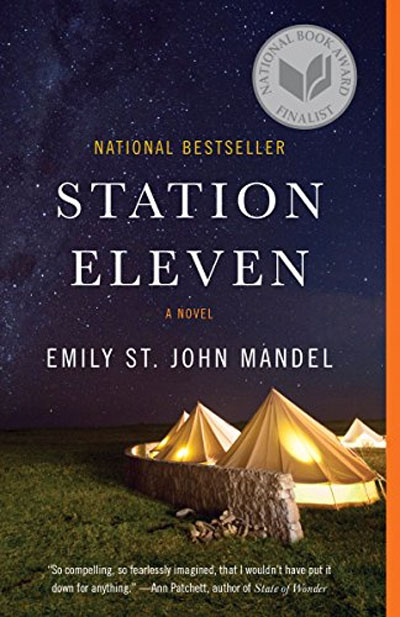 Station Eleven and the Phonograph

This novel is a reminder that pieces of a lost civilization can be curated and remembered, even by a few survivors of an apocalyptic flu pandemic who are still absorbing what has happened to their world and to most of humanity. To value what is embedded in Shakespeare, music, and a few objects from the age of technology in the midst of just trying to survive in an imploded world and to want to share those pieces of art and artifacts may seem like a low priority. But for those members of the Traveling Symphony and for Clark Thompson and his Museum of Civilization in the Skymiles Lounge in Concourse C it's what they want to do and feel compelled to do.

Each book in Phonographia's "Library" of phonograph connected books has, by definition, at least one phonograph in its story. Station Eleven barely has one. But it's such a great novel that I have included it as one of the books on Phonographia's shelves of PhonoLiterature.

The following are two paragraphs where Clark remembers that he has survived but also something about the museum he has put together which of course includes a turntable and vinyl records.

Toward the end of his second decade in the airport, Clark was thinking about how lucky he'd been. Not just the mere face of survival, which was of course remarkable in and of itself, but to have seen one world end and another begin. And not just to have seen the remembered splendors of the former world, the space shuttles and the electrical grid and the amplified guitars, the computers that could be held in the palm of a hand and the high-speed trains between cities, but to have lived among those wonders for so long. To have dwelt in that spectacular world for fifty-one years of his life. Sometimes he lay awake in Concourse B of the Severn City Airport and thought, "I was there," and the thought pieced him through with an admixture of sadness and exhilaration.

"It's hard to explain," he caught himself saying sometimes to young people who came into his museum, which had formerly been the Skymiles Lounge in Concourse C. But he took his role as curator seriously and he'd decided years ago that "It's hard to explain" isn't good enough, so he always tried to explain it all anyway, whenever anyone asked about any of the objects he'd collected over the years, from the airport and beyond -- the laptops, the iPhones, the radio from an administrative desk, the electric toaster from an airport-staff lounge, the turntable and vinyl records that some optimistic scavenger had carried back from Severn City -- and of course the context, the pre-pandemic world that he remembered so sharply. No, he was explaining now, to a sixteen-year-old who'd been born in the airport, the planes didn't rise straight up into the sky. They gathered speed on long runways and angled upward. (pp. 231-232, Station Eleven by Emily St. John Mandel, Vintage Books ©2014)