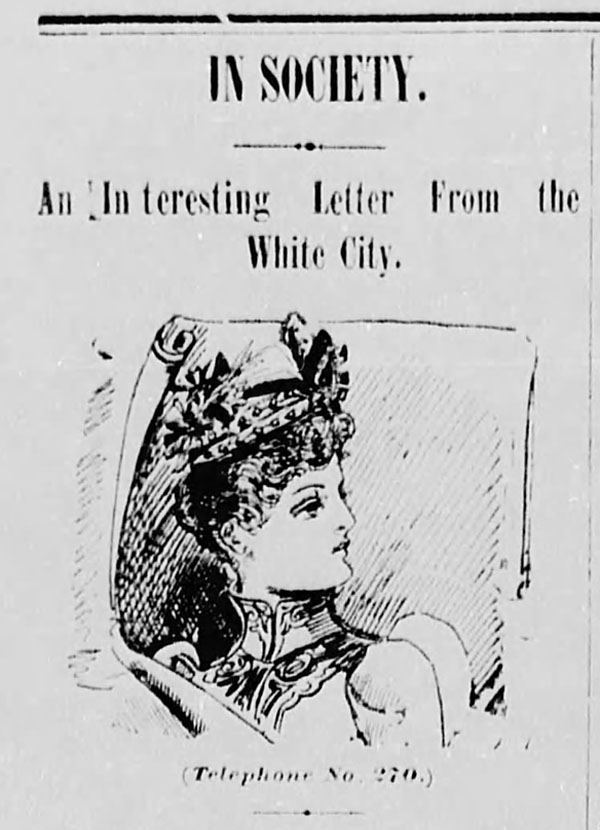 "Fair Fiction" In Newspapers and the World's Columbian Exposition of 1893

A genre in literature called "Fairground Fiction" a.k.a, "Fair Fiction" is for books and stories about, or set in, World's Fairs.

Another source for stories about a visit to the fair is newspapers. These stories could originate with a newspaper sending their correspondent to the fair or it could be a fair visitor who is interviewed by a newspaper or perhaps a visitor goes to the fair and then writes their own "letter to the editor" sharing their impressions of the fair. These stories by visitors to the fair include details which might come from a guide book. As first person stories they invariably display enthusiasm including the "you must visit the fair" entreatment.

To distinguish these newspaper visitor stories from the stories in books I've named these "Fair Fiction in Newspapers," a.k.a. "Fairground News."

I don't know how many of these "Fairground News" reporters actually visited the fair. But we do know that some stories about the fair were written without the author ever setting foot at the fair. Marietta Holley, the author of Samantha at the World's Fair, didn't visit the Chicago World's Fair of 1893 but described in detail many of the places that Samantha visited at that fair. Of course the reason so many descriptions have details is because these visitors have clearly used information which was available from other articles and guidebooks.

For over two years before the opening of the World's Columbian Exposition there were newspaper articles about Edison's new invention, the Kinetograph. It was often mentioned that the kinetograph would be exhibited at the World's Columbian Exposition of 1893 and Edison was quoted in 1891 as saying that one of the reasons he was working on the kinetograph was to have it ready in time for the Chicago World's Fair.

For many reasons it is questionable that Edison's kinetograph was actually an exhibit at the fair. The following are two examples of "Fair Fiction News" related to the World's Columbia Exposition of 1893, each selected because the kinetograph is mentioned in their story.

A Summary with comments and a conclusion are stated for each regarding the article as adding evidence or not to the question of whether the kinetograph and/or kinetoscope was actually at the fair.

FN1 - The Waco Evening News, August 19, 1893 - From Nan Manlove Toby's column "IN SOCIETY - An Interesting Letter From the White City."

DEAR NEWS -- I feel like preaching a sermon tonight, taking as my text the words, "Visit the Fair."

The timing of this article could support the case that Edison's Kinetograph may have been exhibited at the World's Columbian Exhibition of 1893.

The IN SOCIETY for August 19, 1893 was headlined "An Interesting Letter from the White City" in a section titled "WORLD'S FAIR LETTER , Chicago, Aug. 17 '93.

The writer of the WORLD'S FAIR LETTER starts "DEAR NEWS -- I feel like preaching a sermon tonight, take as my text the words, "Visit the Fair." The writer continues by giving some advice about what to wear, not to worry about being in a big city, it's not as expensive as you may have heard, gives reasons for not using a fair's guide book, and mentions some of the exhibits and says she wishes she could say more about the exhibits but says other current magazines with their descriptions "would put to shame any effort of mine."

The writer also mentions that people from Waco were at the Texas building on August 10th and "that there were so many present that everyone felt very much at home."

She then writes that "Mr. Edison's Kinetograph is quite prominent in the electrical exhibit. The instrument transmits photographically as the telephone does phonetically. The inventor thinks that shortly, papers in San Francisco can illustrate the same day's happenings in New York and Chicago, by the use of the Kinetograph." 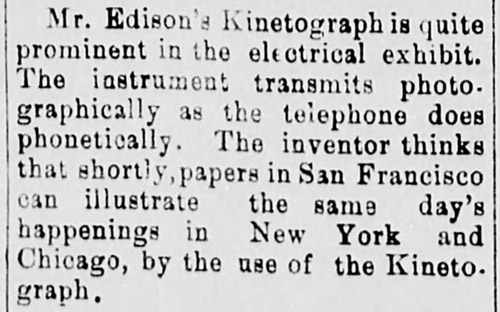 Some details do provide a sense of the "authenticity" of a visit to the fair. The writer mentions that people from Waco were at the Texas building on August 10th and "that there were so many present that everyone felt very much at home." The names of the Wacoites that registered in the Texas building last week is then listed. This list, of course, could have simply been forwarded to the Waco newspaper for publication.

The official guide book for the fair says the kinetograph was to be "among the most unique exhibits" at the fair. Newspapers prior to the fair often identified the kinetograph exhibit as the "Individual Exhibit of the Great Inventor." It would be easy for the writer based on these previous headlines by other newspaper before the fair started to now state that "Mr. Edison's Kinetograph is quite prominent in the electrical exhibit."

Stating the Kinetograph's prominence in the Electricity Building, therefore is insufficient evidence of a kinetograph exhibit.

Likewise, a simile to describe the kinetograph such as "transmits photographically as the telephone does phonetically" sounds like another standard, pre-fair description of the kinetograph.

If she saw the kinetograph what moving pictures did she see. What did she hear? If Edison's wonder was an operational kinetograph one would expect more details with perhaps a sense of first-person wonder.

FN1 Conclusion: The kinetoscope was not at the World's Columbian Exposition of 1893. The Kinetograph (the camera) may have been displayed as a device with explanatory text and information about the exhibit including predictions for its future but there is no evidence that anything was operational. 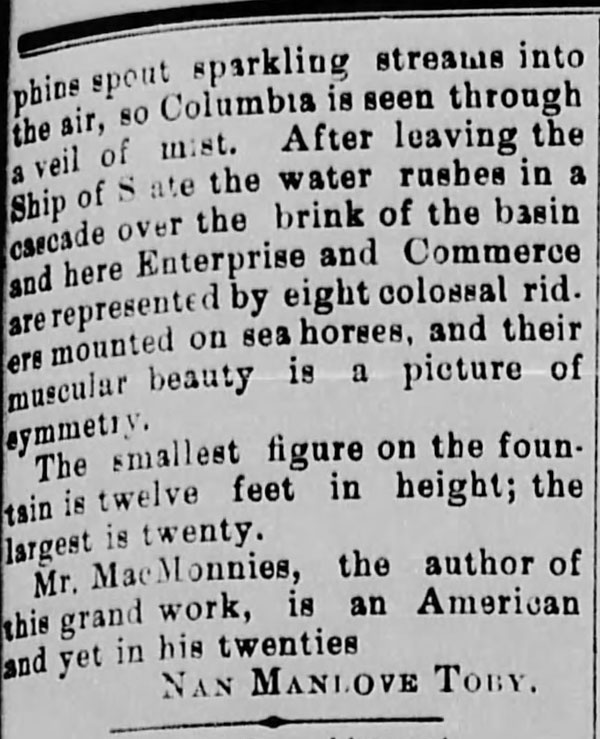 FN2 Summary - This newspaper account is the story that "Jim told his friend and the Eagle Reporter." As a visitor to the Chicago World's Fair he itemizes many of the things he and his wife saw with dimensions and details to add precision to his account.

Jim's description of the Electricity Building was the following: "Here were exhibited all manner of electrical applicances, telephones, graphophones... "Edison's first phonograph and his latest invention, the kinetograph, for taking instantaneous pictures;"

The Brooklyn Daily Eagle, July 16, 1893
"Well," said Tom, after listening patiently and with deep interest to Jim's eloquent recital, "would you advise me to go?" "By all means," was Jim's reply, "I think it is the duty of every American who loves his country and who can at all spare the time and the money to go to Chicago..." "All I have to say is if you and your wife don't see the fair you will regret it as long as you live." The Brooklyn Daily Eagle, July 16, 1893

FN2 Comments: This lengthy article covering their nine day trip (six days at the fair) had many details of the fair regarding architecture, gallery sizes, flower gardens, what street they entered the fair from, the supper they "enjoyed" for 75 cents, a good glass of beer on the grounds for 5 cents, and all of the buildings which they saw or went into including the Electricity Building where "all manner of electrical appliances, telephones, graphohones, motors of all kinds; ...Edison's first phonograph and his latest invention, the kinetograph, for taking instantaneous pictures;"

The author describes many details to provide the setting of being at the fair with many of those details sounding like they came from a guide book. This doesn't mean that Jim and his wife didn't go to Chicago. But it could mean that many of the details were filled in after the fact or in lieu of actually seeing a specific exhibit.

The kinetograph exhibit and the one advertised as Edison's Individual Exhibit of his latest wonder was supposed to be the device that showed moving pictures and be accompanied by sound from Edison's phonograph. Instead, this kinetograph is described as a camera.

Additionally, where is the excitement and sense of wonder by the visitors at seeing moving pictures if the kinetograph was actually being exhibited? There is no evidence that the kinetograph that "transmitts scenes to the eye as well as sounds to the ear" was on exhibit and seen by this couple.

FN2 Conclusion: The kinetoscope was not at the World's Columbian Exposition of 1893. The Kinetograph (the camera) may have been displayed as a device but there is no evidence that anything seen by this couple was operational.

For more details about the Kinetograph and the Chicago World's Fair see Phonographia's "The World's Columbian Exposition of 1893 and the Kinetograph.