The phonograph's first public demonstration on December 7, 1877 at the office of Scientific American in New York City resulted in "The Talking Phonograph," an article published on December 22, 1877.

This newspaper clipping is one of those pieces of ephemera that gives us a ticket to travel in time -- this one taking us to Edison walking into the office of Scientific American where the first public "conversation" took place between a machine and human beings on planet Earth.

There it was reported that Edison's "little machine" was able to record the vibrations of the human voice and when played back it repeated what was "nothing else than the human voice...it is impossible to listen to the mechanical speech without his experiencing the idea that his senses are deceiving him."

The human perception of ephemeral sound would never be the same.

The social and cultural changes created by Edison's "little machine" were a number of years away but its impact from 1877 to the present left vibrations and footprints in countless phonograph connections in popular culture. -- Doug Boilesen, 2022

Mr. Thomas A. Edison recently came into this office, placed a little machine on our desk, turned a crank, and the machine inquired as to our health, asked how we liked the phonograph, informed us that it was very well, and bid us a cordial good night. These remarks were not only perfectly audible to ourselves, but to a dozen or more persons gathered around, and they were produced by the aid of no other mechanism than the simple little contrivance explained and illustrated below.

The principle on which the machine operates we recently explained quite fully in announcing the discovery. There is, first, a mouth piece, A, Fig. 1, across the inner orifice of which is a metal diaphragm, and to the center of this diaphragm is attached a point, also of metal. B is a brass cylinder supported on a shaft which is screw-threaded and turns in a nut for a bearing, so that when the cylinder is caused to revolve by the crank, C, it also has a horizontal travel in front of the mouthpiece, A. It will be clear that the point on the metal diaphragm must, therefore, describe a spiral trace over the surface of the cylinder. On the latter is cut a spiral groove of like pitch to that on the shaft, and around the cylinder is attached a strip of tinfoil. When sounds are uttered in the mouthpiece, A, the diaphragm is caused to vibrate and the point thereon is caused to make contacts with the tinfoil at the portion where the latter crosses the spiral groove. Hence, the foil, not being there backed by the solid metal of the cylinder, becomes indented, and these indentations are necessarily an exact record of the sounds which produced them.

It might be said that at this point the machine has already become a complete phonograph or sound writer, but it yet remains to translate the remarks made. It should be remembered that the Marey and Rosapelly, the Scott, or the Barlow apparatus, which we recently described, proceed no further than this. Each has its own system of caligraphy [sic], and after it has inscribed its peculiar sinuous lines it is still necessary to decipher them. Perhaps the best device of this kind ever contrived was the preparation of the human ear made by Dr. Clarence J. Blake, of Boston, for Professor Bell, the inventor of the telephone. This was simply the ear from an actual subject, suitably mounted and having attached to its drum a straw, which made traces on a blackened rotating cylinder. The difference in the traces of the sounds uttered in the ear was very clearly shown. Now there is no doubt that by practice, and the aid of a magnifier, it would be possible to read phonetically Mr. Edison's record of dots and dashes, but he saves us that trouble by literally making it read itself. The distinction is the same as if, instead of perusing a book ourselves, we drop it into a machine, set the latter in motion, and behold! the voice of the author is heard repeating his own composition.

The reading mechanism is nothing but another diaphragm held in the tube, D, on the opposite side of the machine, and a point of metal which is held against the tinfoil on the cylinder by a delicate spring. It makes no difference as to the vibrations produced, whether a nail moves over a file or a file moves over a nail, and in the present instance it is the file or indented foil strip which moves, and the metal point is caused to vibrate as it is affected by the passage of the indentations. The vibrations, however, of this point must be precisely the same as those of the other point which made the indentations, and these vibrations, transmitted to a second membrane, must cause the latter to vibrate similar to the first membrane, and the result is a synthesis of the sounds which, in the beginning, we saw, as it were, analyzed.

In order to exhibit to the reader the writing of the machine which is thus automatically read, we have had a cast of a portion of the indented foil made, and from this the dots and lines in Fig. 2 are printed in of course absolute facsimile, excepting that they are level instead of being raised above or sunk below the surface. This is a part of the sentences, "How do you do?" and "How do you like the phonograph?" It is a little curious that the machine pronounces its own name with especial clearness. The crank handle shown in our perspective illustration of the device does not rightly belong to it, and was attached by Mr. Edison in order to facilitate its exhibition to us.

In order that the machine may be able exactly to reproduce given sounds, it is necessary, first, that these sounds should be analyzed into vibrations, and these registered accurately in the manner described; and second, that their reproduction should be accomplished in the same period of time in which they were made, for evidently this element of time is an important factor in the quality and nature of the tones. A sound which is composed of a certain number of vibrations per second is an octave above a sound which registers only half that number of vibrations in the same period. Consequently if the cylinder be rotated at a given speed while registering certain tones, it is necessary that it should be turned at precisely that same speed while reproducing them, else the tones will be expressed in entirely different notes of the scale, higher or lower than the normal note as the cylinder is turned faster or slower. To attain this result there must be a way of driving the cylinder, while delivering the sound or speaking, at exactly the same rate as it ran while the sounds were being recorded, and this is perhaps best done by well regulated clockwork. It should be understood that the machine illustrated is but an experimental form, and combines in itself two separate devices--the phonograph or recording apparatus, and the receiving or talking contrivance which reads it. Thus in use the first machine would produce a slip, and this would for example be sent by mail elsewhere, together in all cases with information of the velocity of rotation of the cylinder. The recipient would then set the cylinder of his reading apparatus to rotate at precisely the same speed, and in this way he would hear the tones as they were uttered. Differences in velocity of rotation within moderate limits would by no means render the machine's talking indistinguishable, but it would have the curious effect of possibly converting the high voice of a child into the deep bass of a man, or vice versa.

No matter how familiar a person may be with modern machinery and its wonderful performances, or how clear in his mind the principle underlying this strange device may be, it is impossible to listen to the mechanical speech without his experiencing the idea that his senses are deceiving him. We have heard other talking machines. The Faber apparatus for example is a large affair as big as a parlor organ. It has a key board, rubber larynx and lips, and an immense amount of ingenious mechanism which combines to produce something like articulation in a single monotonous organ note. But here is a little affair of a few pieces of metal, set up roughly on an iron stand about a foot square, that talks in such a way, that, even if in its present imperfect form many words are not clearly distinguishable, there can be no doubt but that the inflections are those of nothing else than the human voice.

We have already pointed out the startling possibility of the voices of the dead being reheard through this device, and there is no doubt but that its capabilities are fully equal to other results just as astonishing. When it becomes possible as it doubtless will, to magnify the sound, the voices of such singers as Parepa and Titiens will not die with them, but will remain as long as the metal in which they may be embodied will last. The witness in court will find his own testimony repeated by machine confronting him on cross-examination--the testator will repeat his last will and testament into the machine so that it will be reproduced in a way that will leave no question as to his devising capacity or sanity. It is already possible by ingenious optical contrivances to throw stereoscopic photographs of people on screens in full view of an audience. Add the talking phonograph to counterfeit their voices, and it would be difficult to carry the illusion of real presence much further. 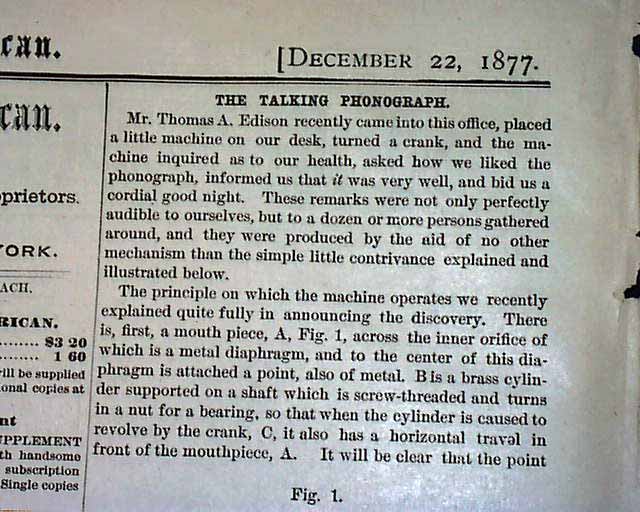 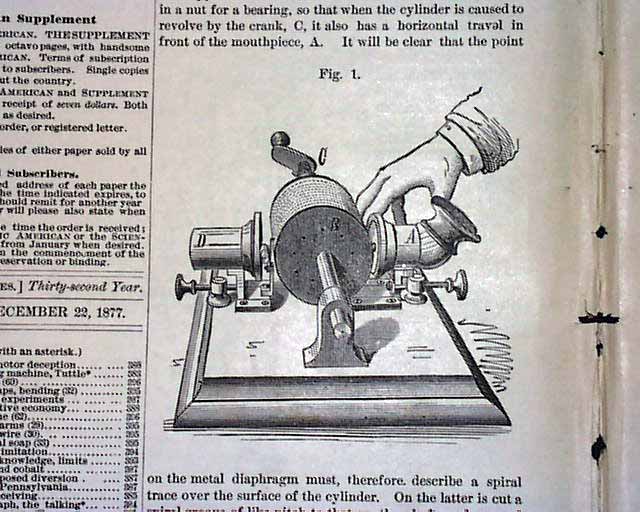 Watch American Experience PBS (above) for an overview of this Scientific American article about the invention of Edison's Phonograph.

Also, a thank-you to Phonozoic.net and Patrick Feaster for the above transcription of the article (from those days before OCR's and 'text' conversions from on-line newspapers became so commonly used) - which is also a two-degrees of separation phonograph connection (my bold) since Ray Kruzweil's Reading Machine was a device that "could scan a given page, parse the text on the page, and recite them to the person who wanted to read the page. It was a definite upgrade from vinyl books, and it helped generate excitement about OCR technology in the mid 1970s." (Courtesy "Seek and Spell," Smith, Ernie, tedium.com, March 23, 2017).

On this Day Factola - December 22