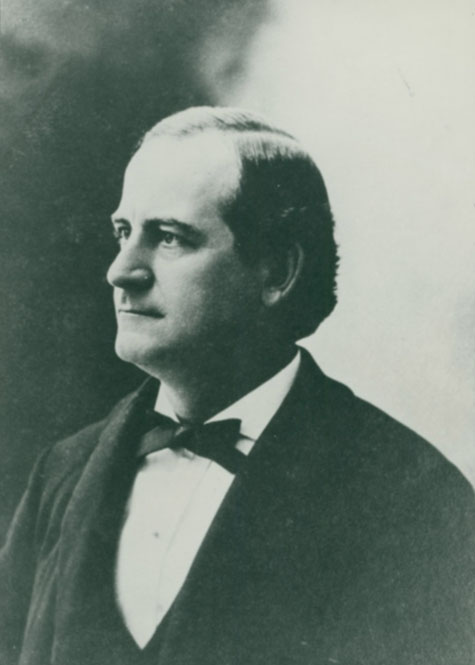 William Jennings Bryan, Nebraska's Boy Orator of the Platte, the Great Commoner and leader of the Populist movement in the late nineteenth and early twentieth century played a prominent role in American politics and popular culture. Bryan unsuccessfully ran for President three times, was Secretary of State under President Wilson but resigned in 1915 over Wilson's handling of the sinking of the Luisitania by Germany as he thought Wilson was changing his neutrality position and that this would lead to the United States entering the war.

Bryan was popular in Nebraska but much of the popular press, particularly in the East, opposed Bryan's populist platform which included the unlimited coinage of silver, a graduated income tax, nationalization of the railroads, a decrease in immigration, antitrust laws and other government regulations of business. Bryan would also became known for his opposition to American imperialism. He was very religious (even though he was portrayed as "The Sacrilegious Candidate" by Judge magazine after his "Cross of Gold" speech), was against the teaching of evolution and ended his public career helping prosecute Tennessee school teacher John Scopes for teaching evolution.

Bryan is referenced in two Cather stories set in Nebraska.

The following are the Cather book titles with text referencing Bryan, explanatory notes, illustrations, ephemera, comments, recorded words by Bryan and an essay written by Cather about Bryan.

"The Personal Side of William Jennings Bryan" an essay written by Willa Cather under the pseudonym of Henry Nickelman, 1900.

Well, what do folks in New York think of William Jennings Bryan?

Having got his wife out of the way, Lou sat down on the step and began to whittle. Well, what do folks in New York think of William Jennings Bryan? Lou began to bluster, as he always did when he talked politics. We gave Wall Street a scare in ninety-six, all right and were fixing another to hand them. Silver wasnt the only issue, he nodded mysteriously. Theres a good many things got to be changed. The West is going to make itself heard. p. 104

Explanatory Note 104.19 William Jennings Bryan: Bryan (1860-1925) was a midwestern lawyer and political leader who ran unsuccessfully for the presidency in 1896, 1900, and 1908. His proposed cure for the depressed economic conditions in the 1890s, strongly opposed by Wall Street bankers, was an easy money policy based on unlimited coinage of silver. Bryan was enormously popular in Nebraska.

When Lou asks Carl Linstrum, who was living in the East and who Lou expected to know something about what New Yorkers were thinking as the 1900 election approached, Carl doesnt answer the question. Instead Carl said to Lou "but what do you folks out here have to kick about? You have the only safe place there is"

Many New York newspapers and periodicals would disparage Bryan in the 1896, 1900 and 1908 Presidential elections and repeat images and themes in each election based on stoked up fears about populism, anarchy, Free-Silver (16-1), risks to the economy and losing democracy itself if Bryan was elected. 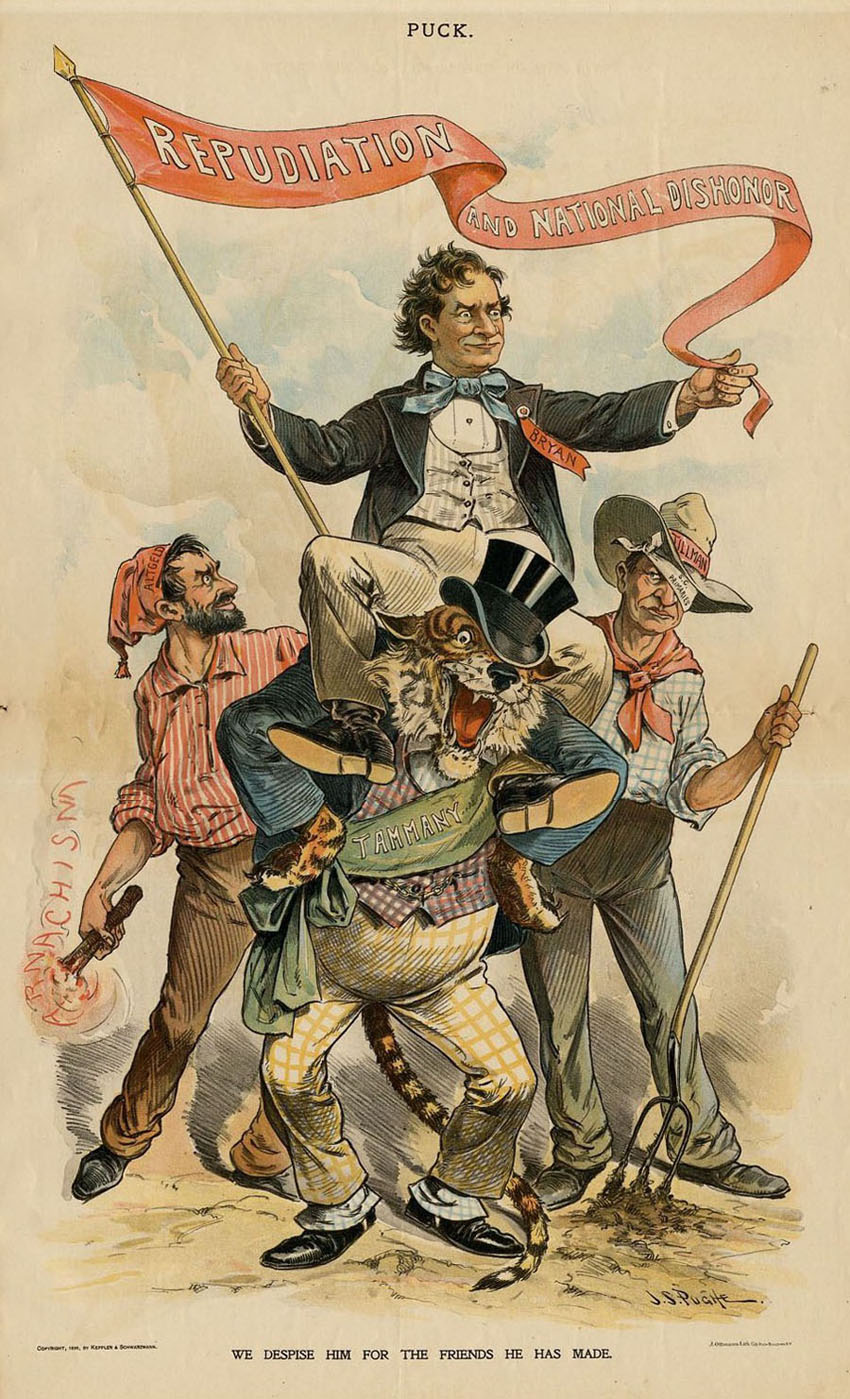 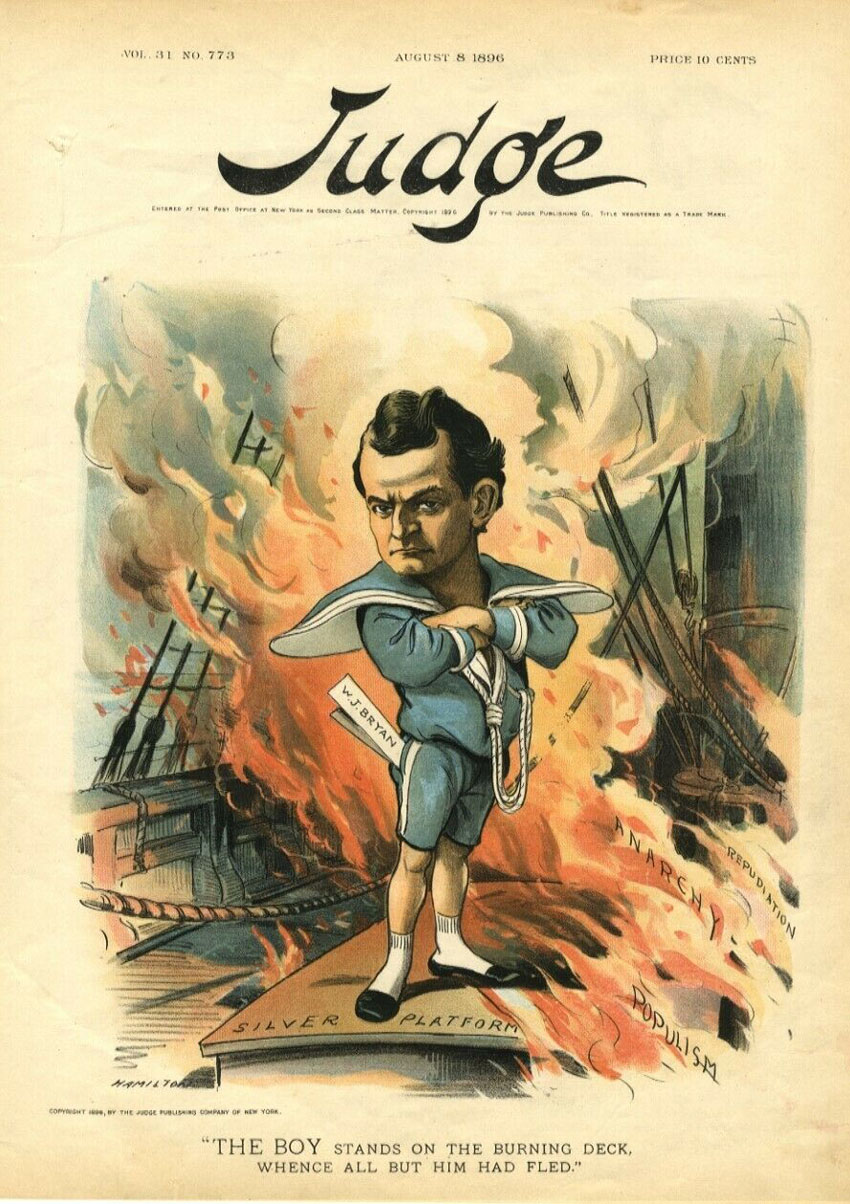 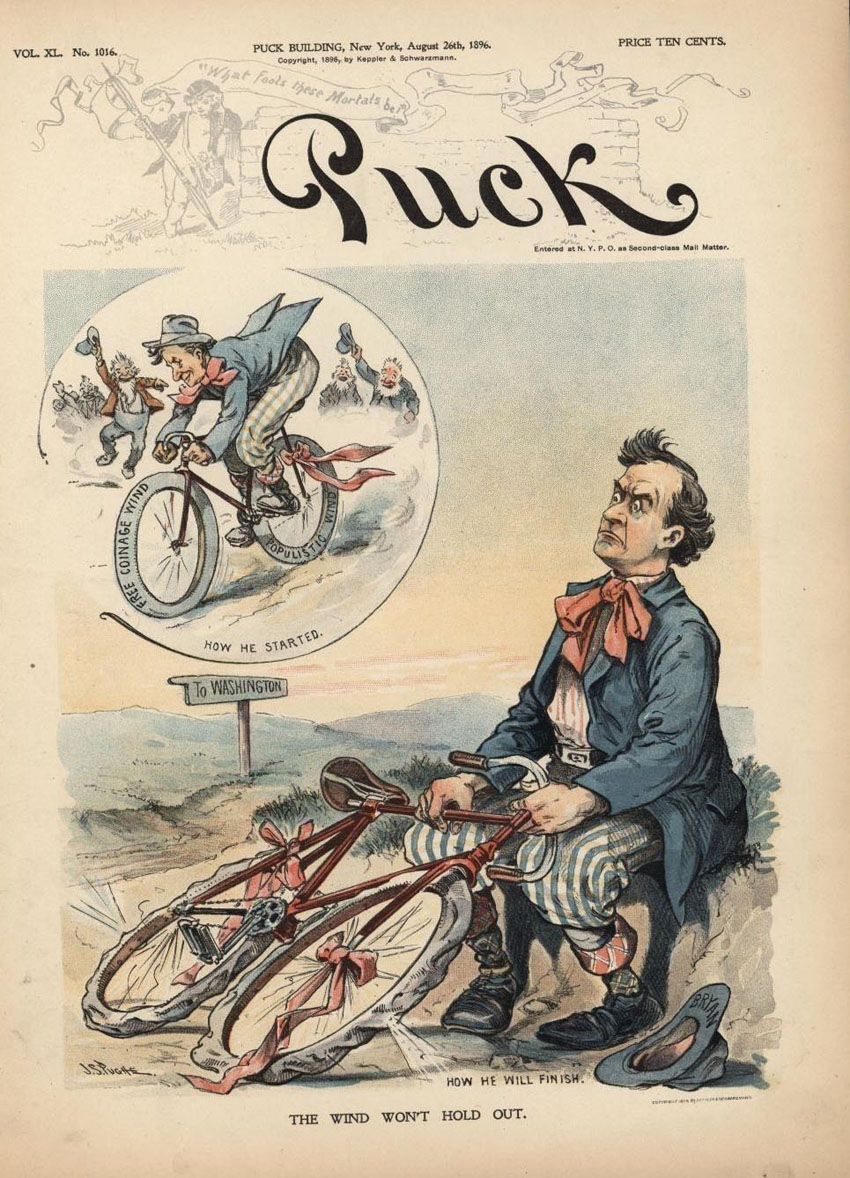 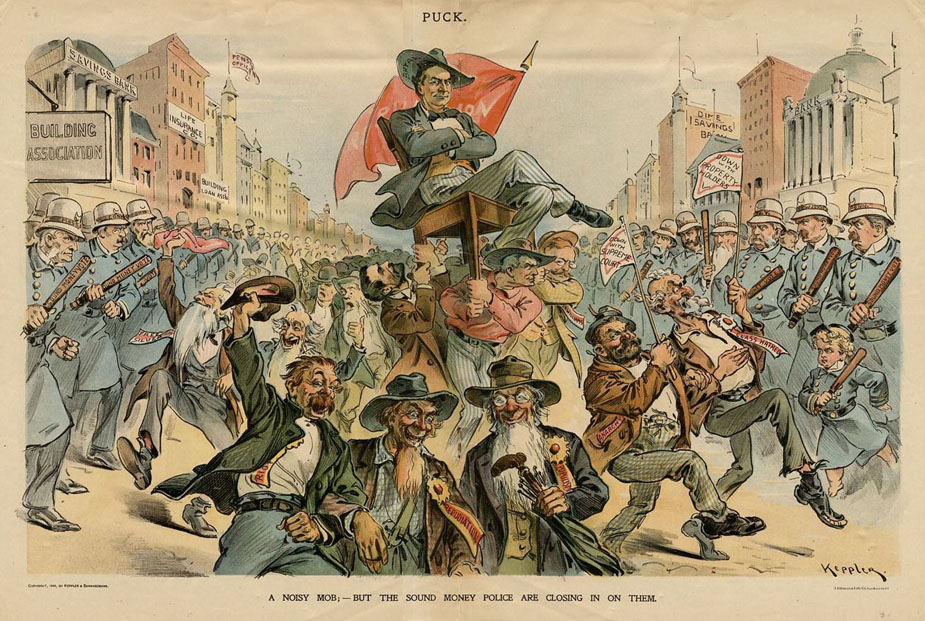 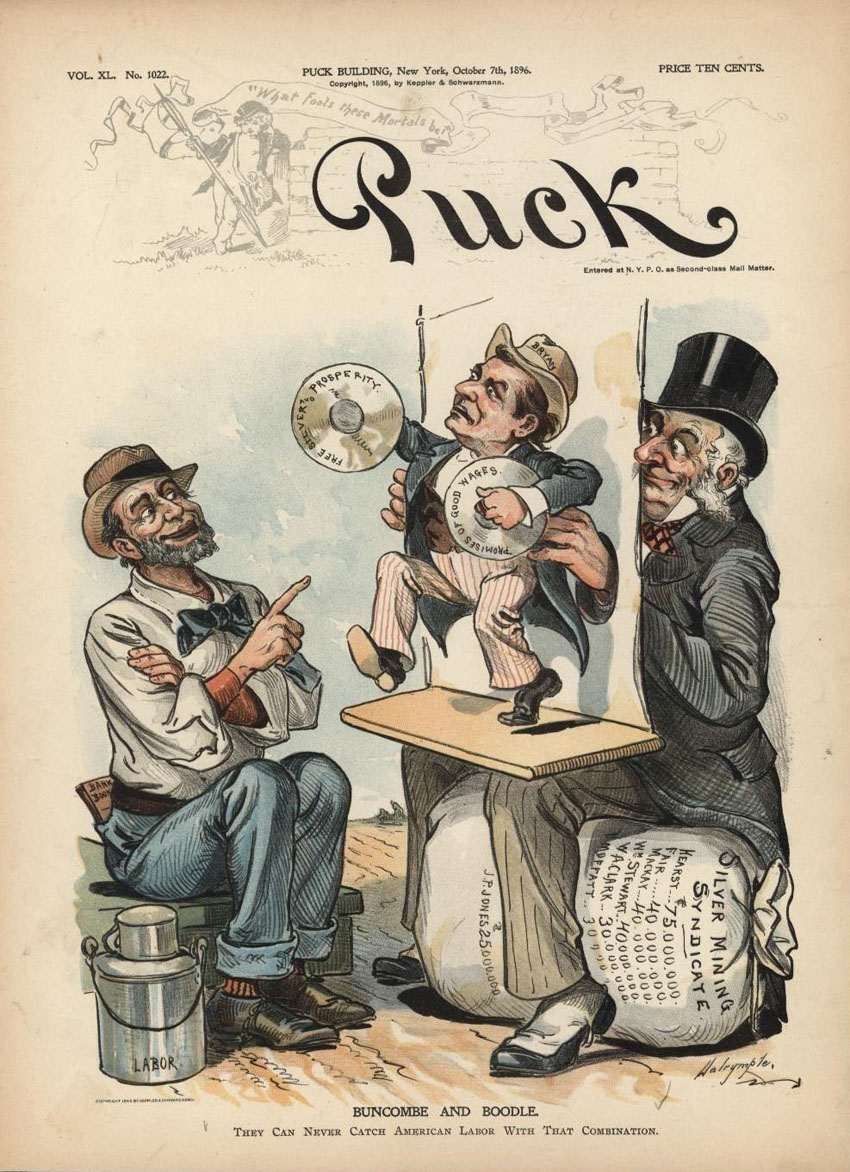 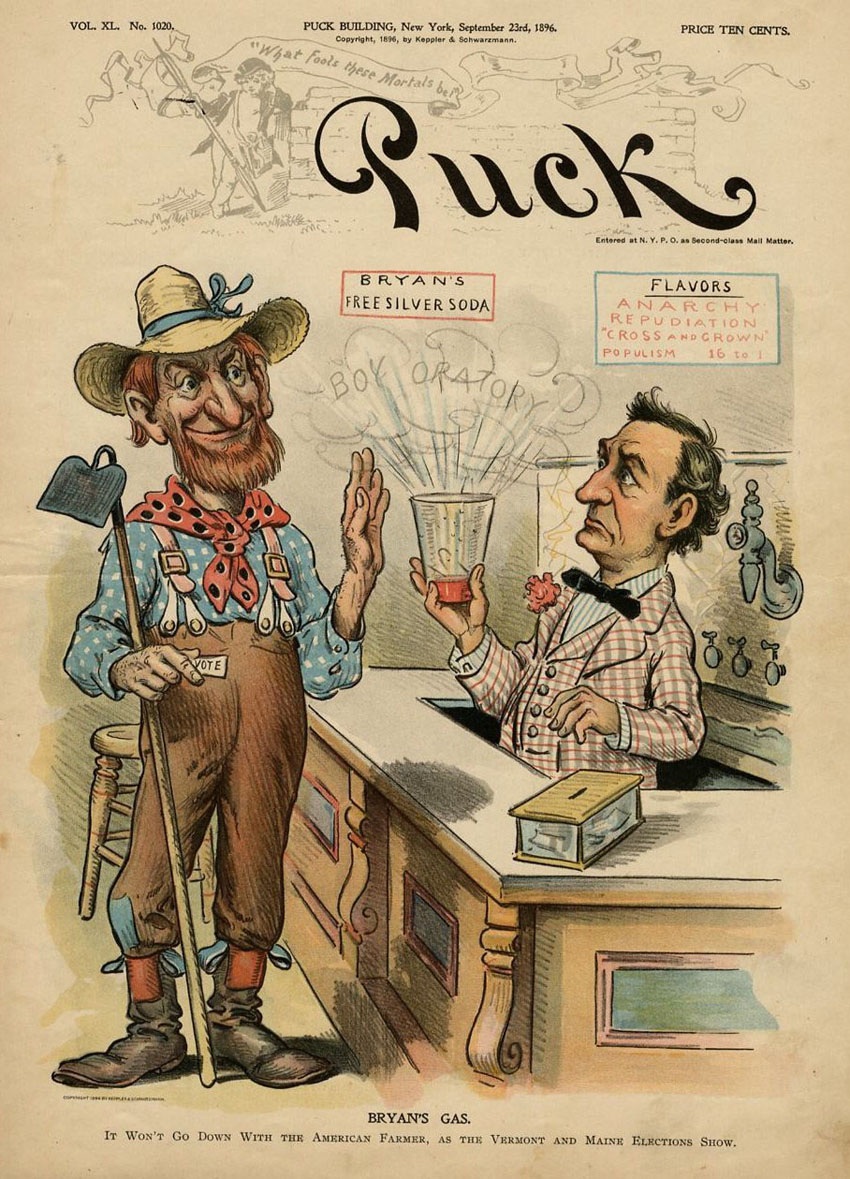 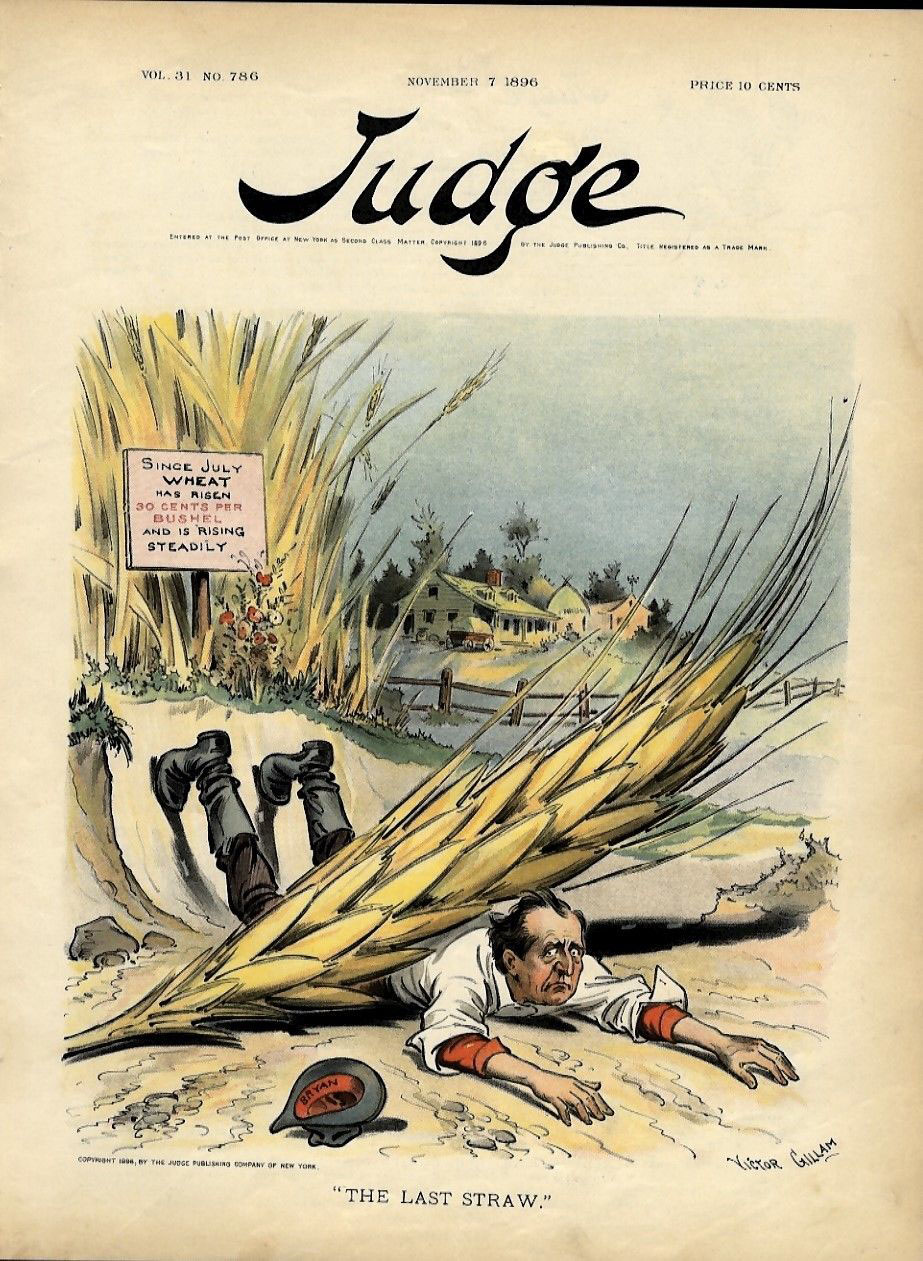 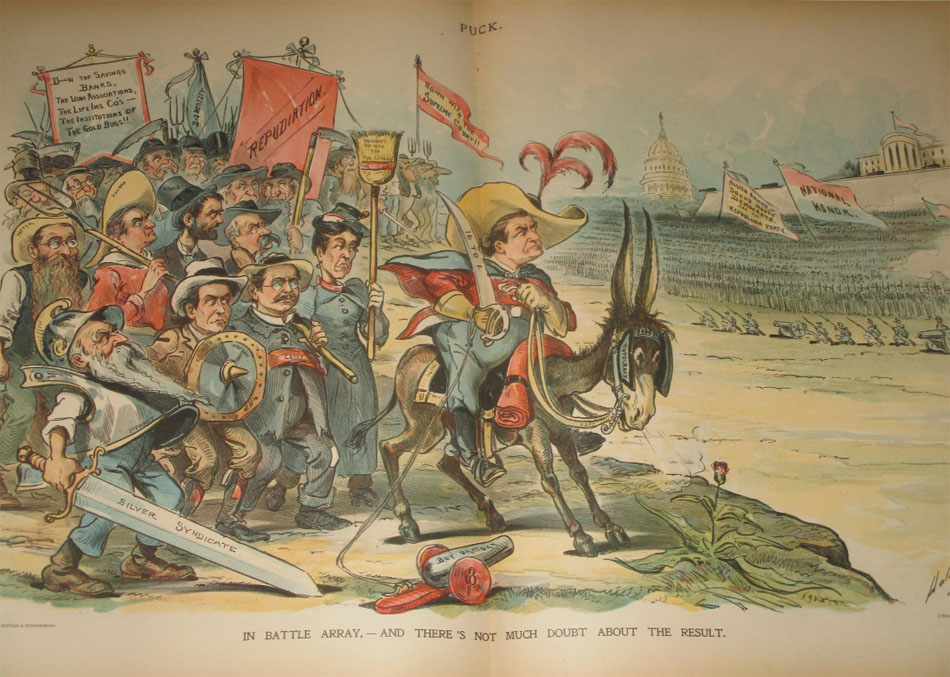 "In Battle Array, -- And There's Not Much Doubt About the Result." Puck, 1896 by Louis Dalrymple 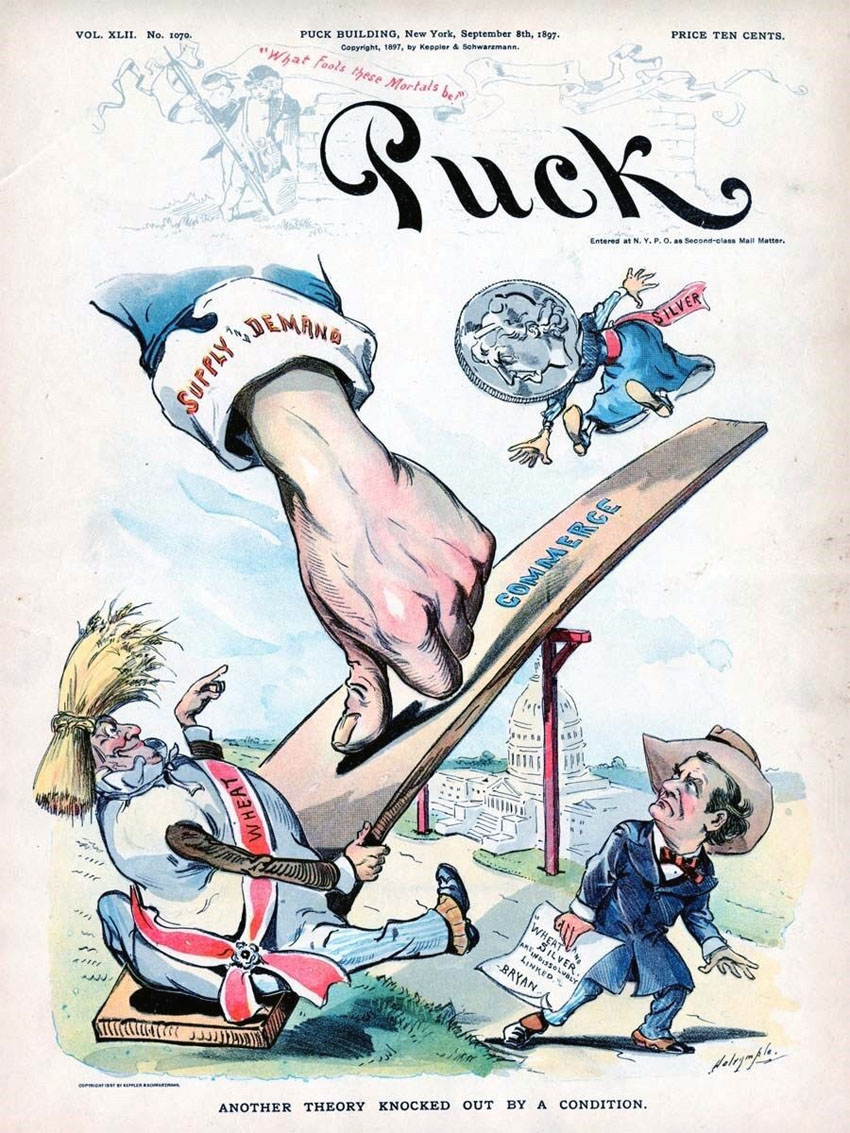 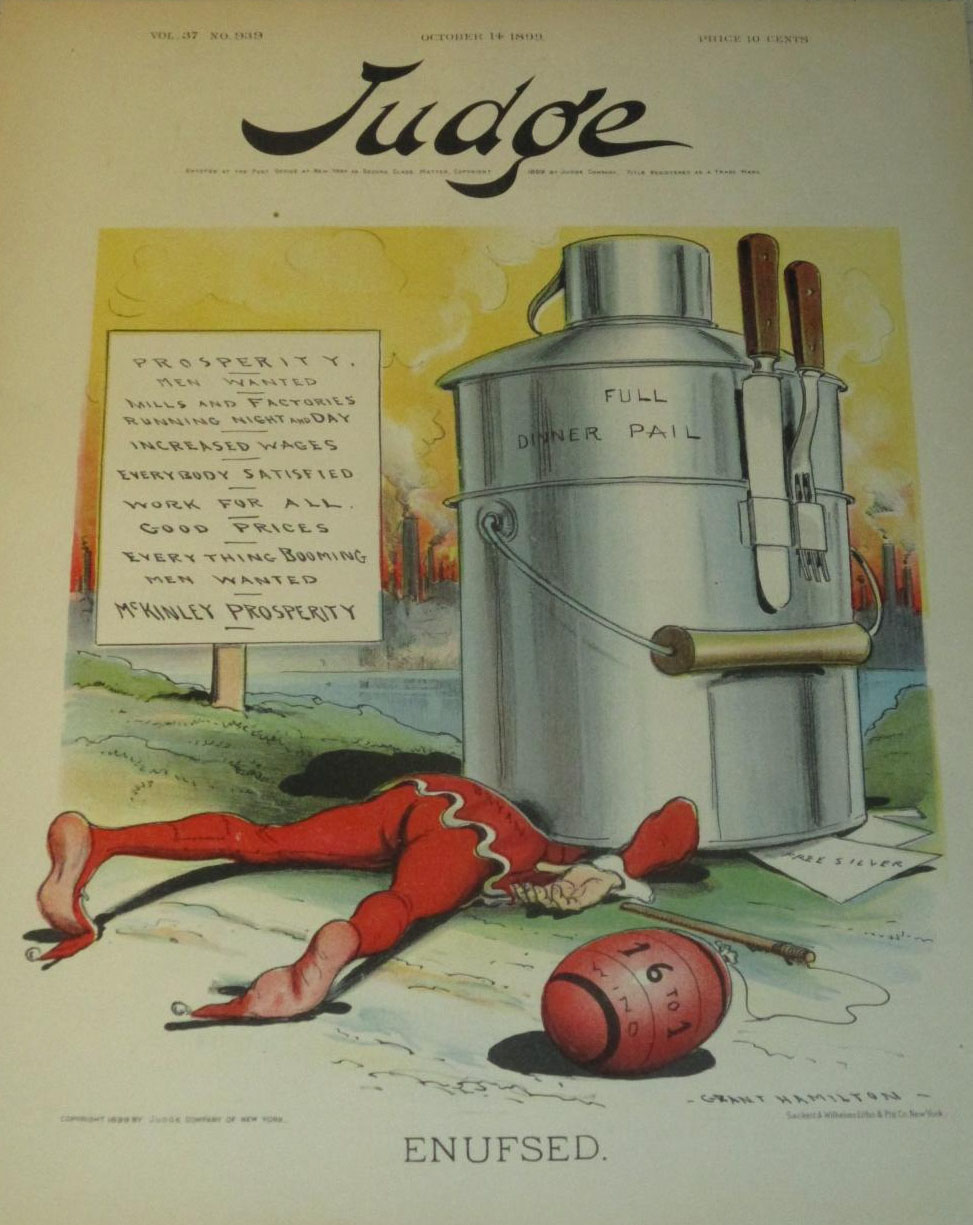 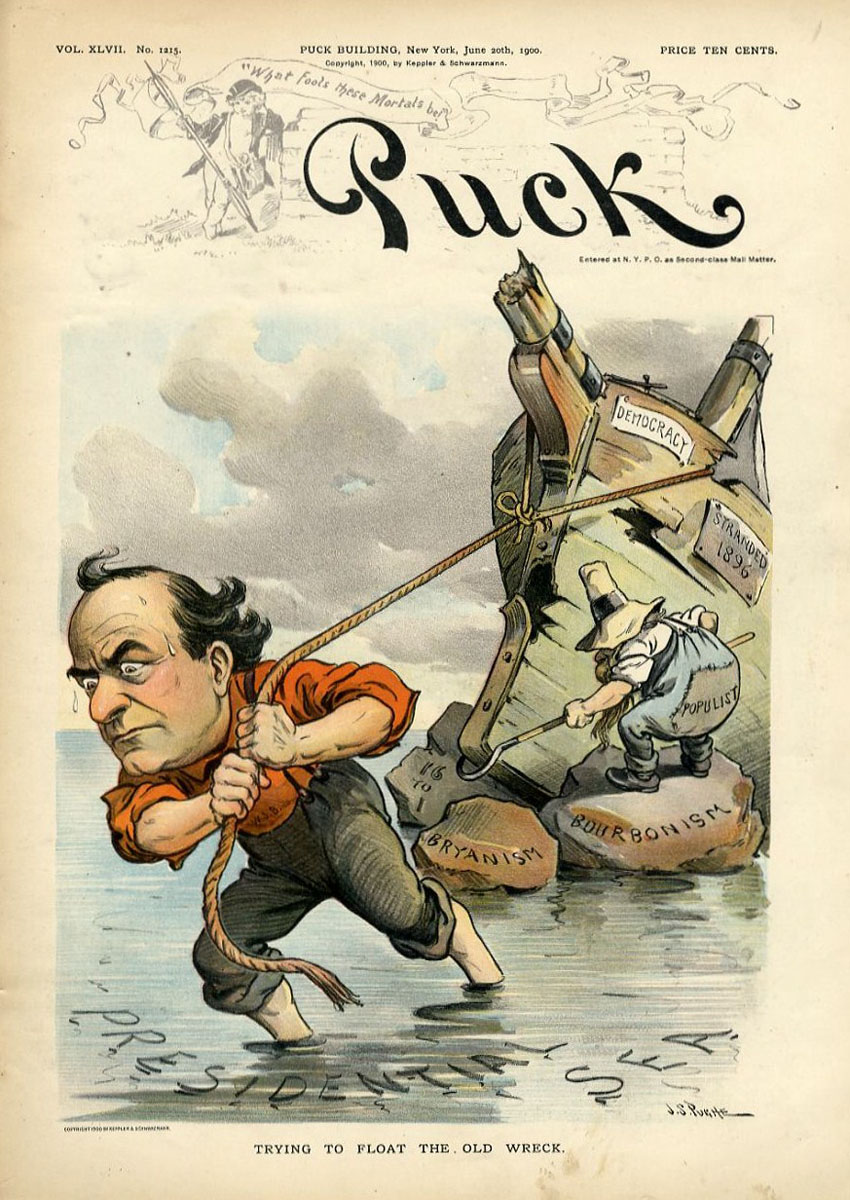 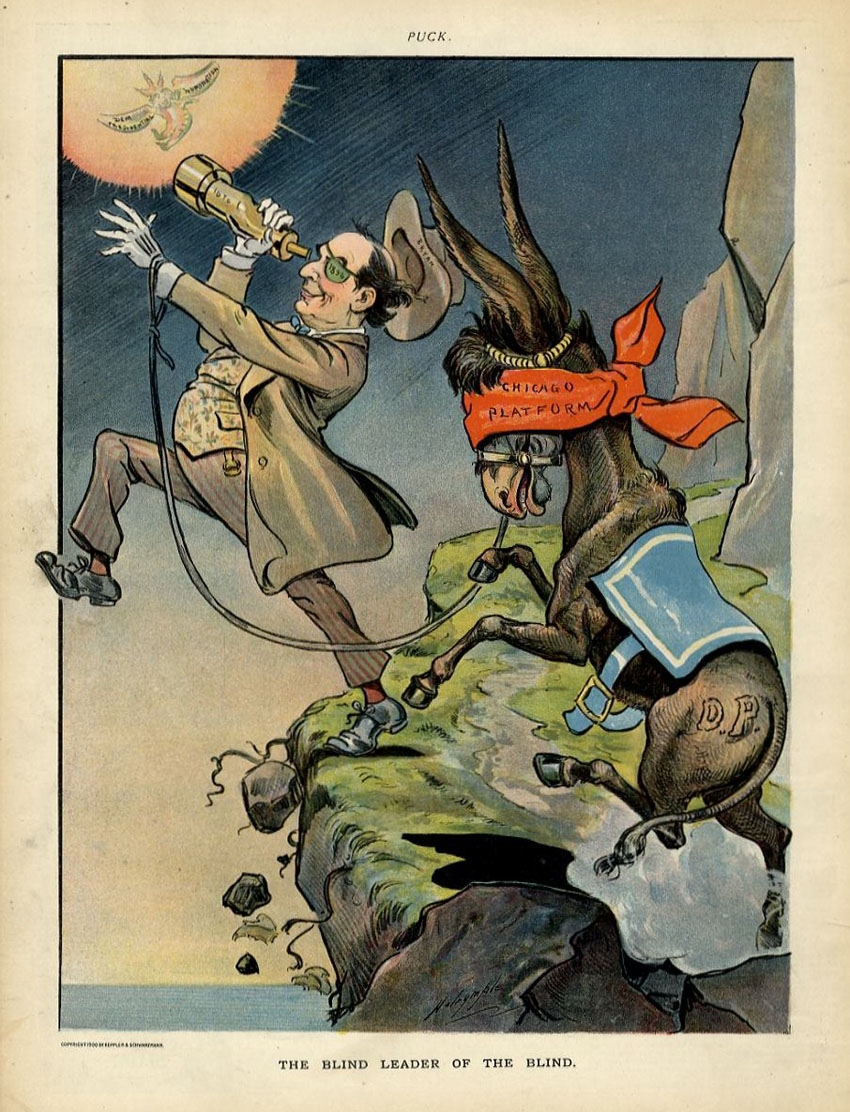 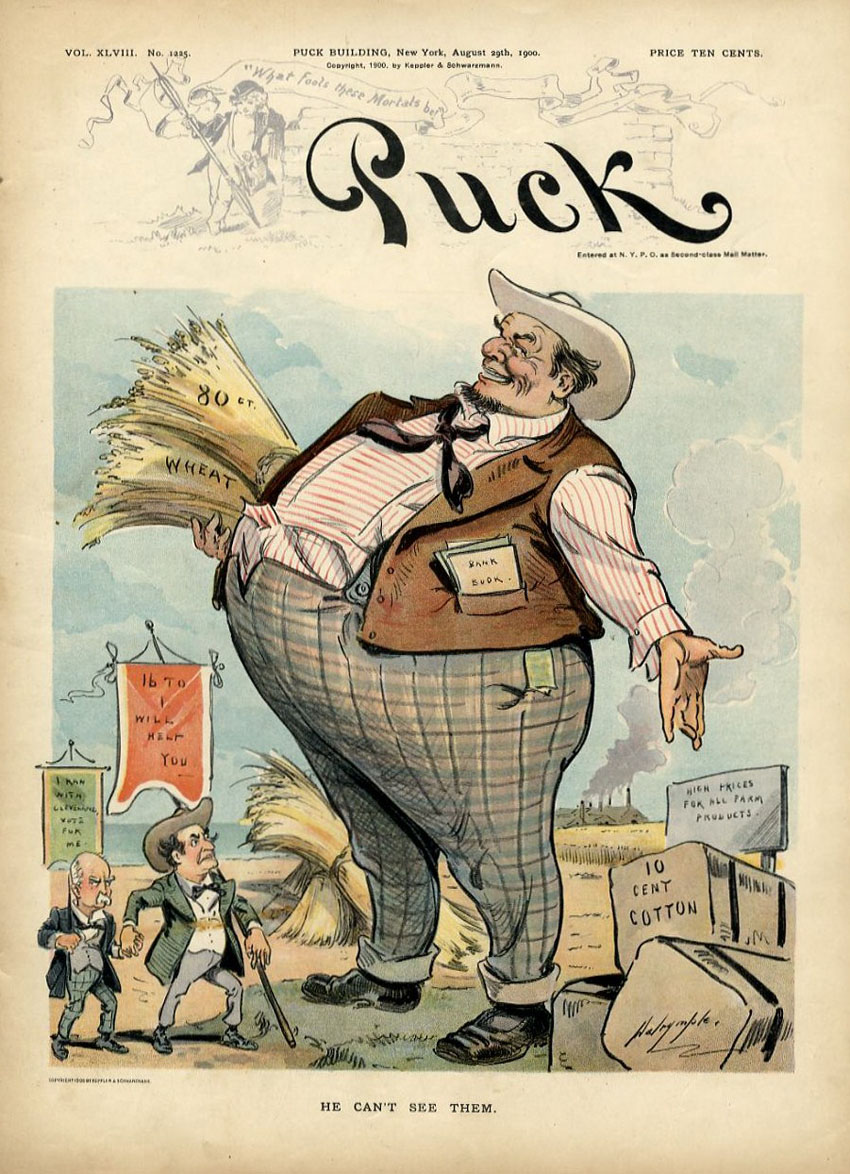 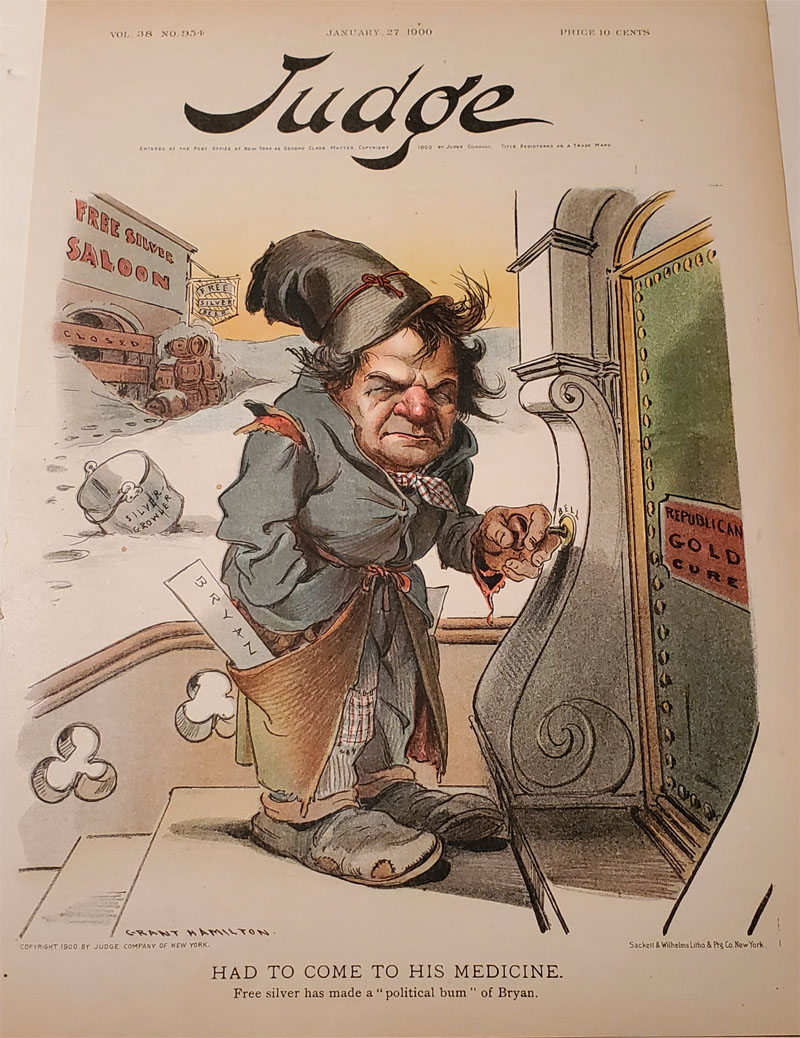 "Had To Come To His Medicine" - William Jennings Bryan at the Republican Gold Cure Door, Judge, 1900 by Grant Hamilton

Well, what do folks in New York think of William Jennings Bryan?

In the 1900 Presidential Election Bryan improved in New York, but still lost by 9.27% in the rematch with McKinley. Bryan, however, lost in Nebraska by a margin of 3.24%.

Explanatory Note No. 2 for title page epigraph: "Bidding the eagles of the West fly on . . ."

"Bidding the eagles of the West fly on . . .": This phrase is from Vachel Lindsay's 1919 poem "Bryan, Bryan, Bryan, Bryan: The Campaign of Eighteen Ninety-Six, as Viewed at the Time by a Sixteen Year-Old."

William Jennings Bryan (1860-1925), a Nebraskan, headed the Populist movement in the United States in the late nineteenth century; given his three unsuccessful runs for the presidency, the reference to him suggests the decline of the agrarian tradition in the United States. Lindsay recalls seeing Bryan as "the bard and the prophet" of the people of the Midwest and West, embodying "the hopes of all mankind," and asserts that although his 1896 candidacy ended in defeat by eastern money and corruption, Bryan established himself as a heroic figure. On the one hand, then, Cather may be suggesting certain parallels between Bryan and her protagonist, Claude Wheeler: both pursue a cause, embody "the hopes of all mankind," and can be seen as heroic figures. However, Janis Stout, noting the anti-Populist and anti-Bryan views of Cather's staunchly Republican father, suggests that Cather must have read Lindsay's poem as "foolish blather" and used this epigraph ironically (Willa Cather 179). 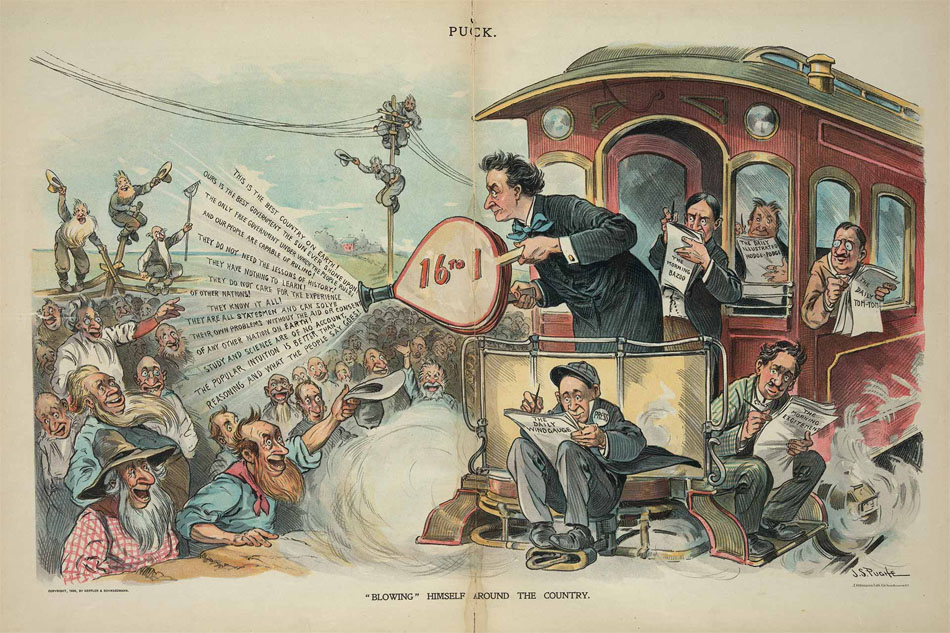 "Blowing" Himself Around the Country. Puck, September 1896

Bryan's whistle-stop tours during the 1896 presidential campaign were unprecedented. "Bryan took four major railroad trips, giving stump speeches at nearly every stop on the line." See "Railroads and the Making of America  William Jennings Bryan's 1896 Campaign" for a list of states and speeches given on those whistle stop train trips. (1)

The revolutionary method of whistle-stop campaigning by train was popular with the tens of thousands who attended Bryan's speeches while McKinley famously sat on his front porch. Bryan traveled 18,000 miles by train to give over 600 speeches (36 in one day) to about five million people according to Jerry Claire in his 2016 article for the National Museum of History's "Stories from the Museum" about Bryan's Cross of Gold speech and the Wizard of Oz.

Bryan gave a speech at the Red Cloud, Nebraska Opera House during the 1896 campaign. Here is a link to the speech Bryan gave on November 3, 1896 at School House Square in Hastings, Nebraska. 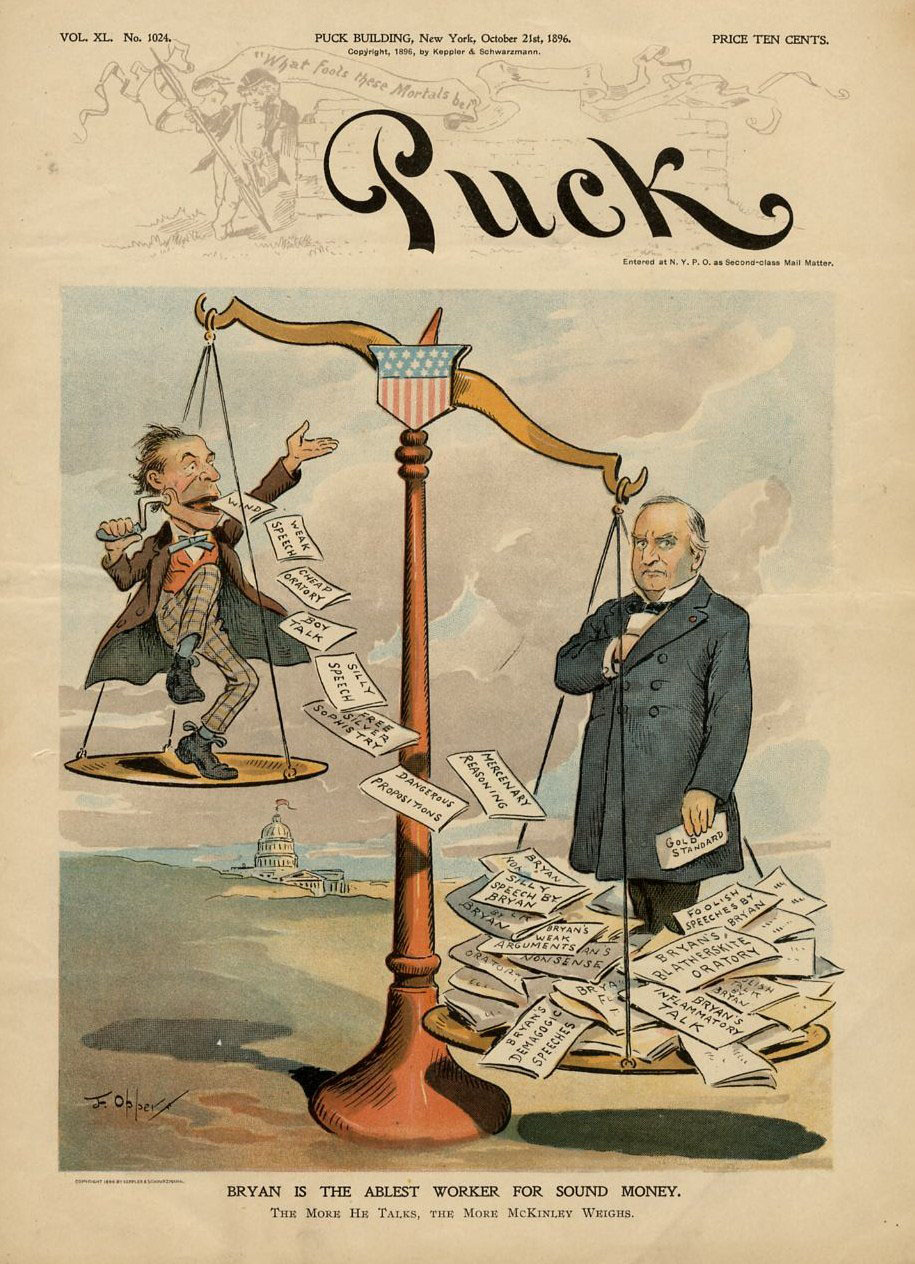 Cather wrote an essay entitled "The Personal Side of William Jennings Bryan" under the pseudonym of Henry Nickelman. James Woodress in Willa Cather: A Literary Life, wrote "The occasion was Bryan's second nomination for president by the Democratic National Convention in July 1900."

She met Bryan on a streetcar in Lincoln when she was a "second prep." He was stumping the first congressional district in his first campaign for public office, which he won by a resounding margin. He had just made a speech and was carrying an ugly floral tribute given him by his supporters. A talkative old lady sitting near him inquired sympathetically:

Mr. Bryan looked quizzically at the flowers and replied politely:

After this encounter Cather saw him occasionally. He lived in Lincoln and was always at home to students in his library in the evenings, and he occasionally wrote for the Hesperian when she was editor. She must have visited his library a number of times, for she describes it in detail. It fascinated her because it was so differentexcept for the classicsfrom any library she would have collected: lives of American statesmen, marked and annotated schoolboy-fashion; works on political economy, mostly by quacks; much poetry of a didactic or declamatory nature; little fiction more recent than Thackeray. "Mr. Bryan used always to be urging us to read Les Misérables if we hadn't, and to re-read it if we had. He declared that it was the greatest novel written, yet I think he had never considered its merits or demerits as a novel at all. It was Hugo's vague hyperbolic generalizations on sociological questions that he marked and quoted." That was one of Cather's favorite novels too, but for entirely different reasons.

When Bryan was in good form, Cather remembered, his conversation was "absolutely overwhelming in its richness and novelty and power, in the force and aptness of his illustrations. Yet one always felt that it was meant for the many, not the few, that it was addressed to humanity, and that there should be a stenographer present to take it down." Sometimes what he said was strikingly original; sometimes it was trite. "He chipped his eggs to the accompaniment of maxims . . . . He buttered his toast with an epigram." She also heard him speak publicly in Red Cloud at the funeral of a friend who had been a member of Congress, but she could not have heard the famous "Cross of Gold" speech that stampeded the Democratic Convention in Chicago in July 1896 and brought him his first nomination for president. Henry Nickelman says he heard it, but Willa Cather was already in Pittsburgh.

For Cather, Bryan symbolized "the entire Middle West; all its newness and vigor, its magnitude and monotony, its richness and lack of variety, its inflammability and volubility, its strength and its crudeness, its high seriousness and self-confidence, its egotism and its nobility." He never made a Democrat out of her or aroused any interest in politics, but the campaign of 1896 did give her the denouement for "Two Friends." Bryan is the only political figure she ever profiled. Like Carlyle, whom she characterized as a bad political economist, she was also inept and indifferent in the political realm. It was only the kingdom of art that she cared about. 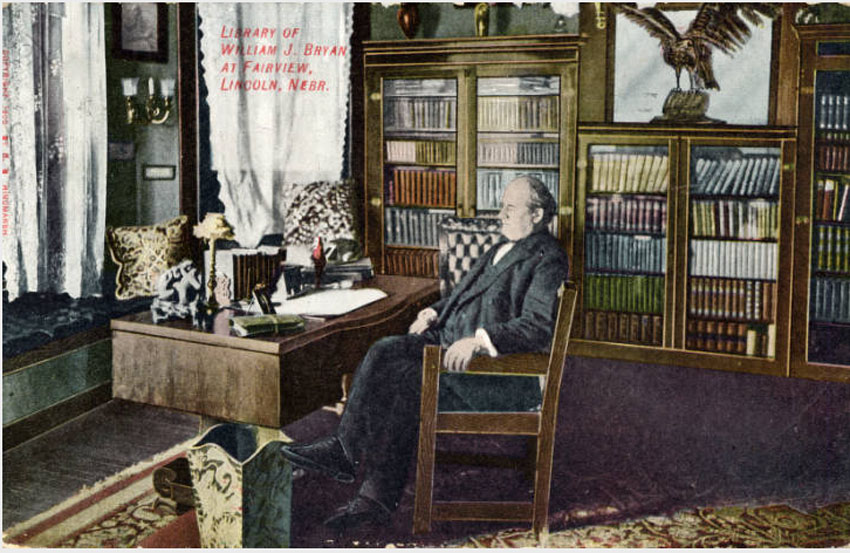 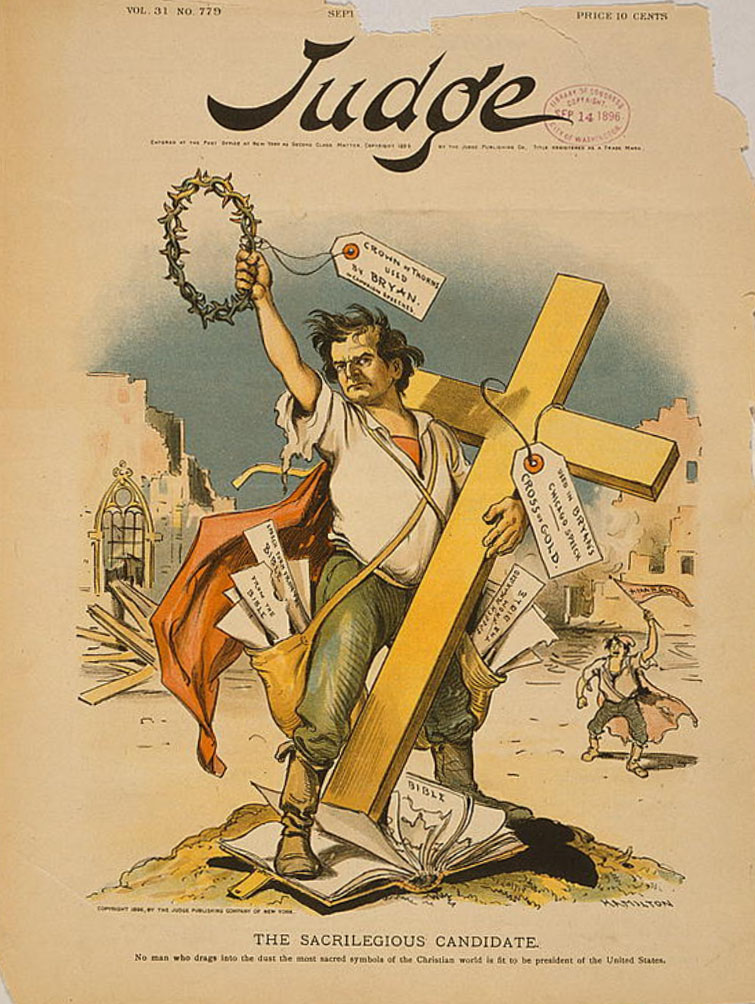 "The Sacrilegious Candidate" - William Jennings Bryan, full-length portrait wearing cape, standing on open bible, facing front with large cross cradled in left arm, holding crown of thorns overhead; in the background, on the left is a vandalized church, on the right is a man wearing a liberty cap and ragged cape, and waving a banner labeled "Anarchy". (Library of Congress) 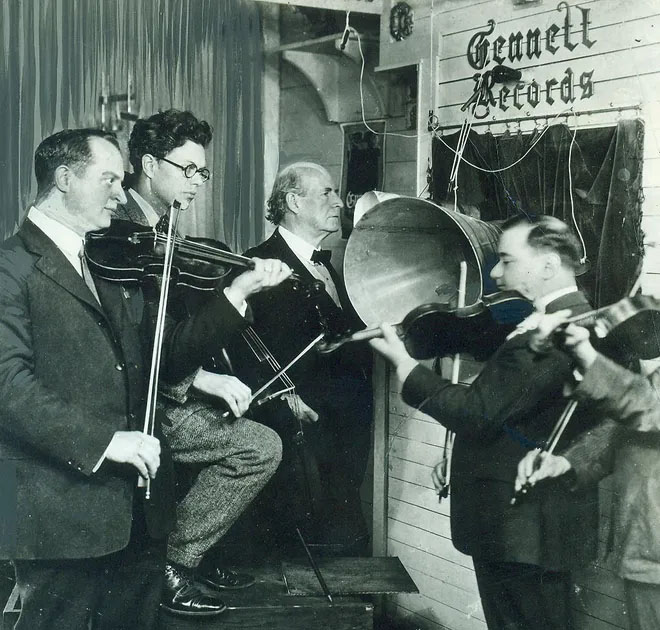 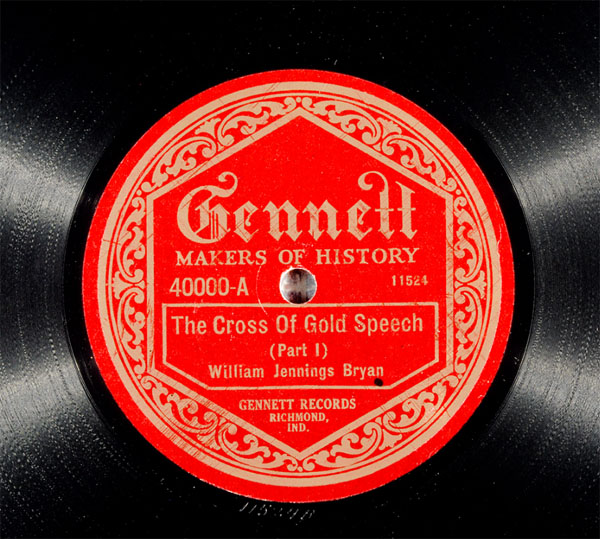 LISTEN to Part I of Bryan's Cross of Gold Speech recorded by Bryan in 1923 (Courtesy i78s.org)

Zonophone Records released a monologue of "The Cross of Gold" circa 1900 by John Kaiser (DAHR) which can be heard below (i78s.org, the David Giovannoni Collection). 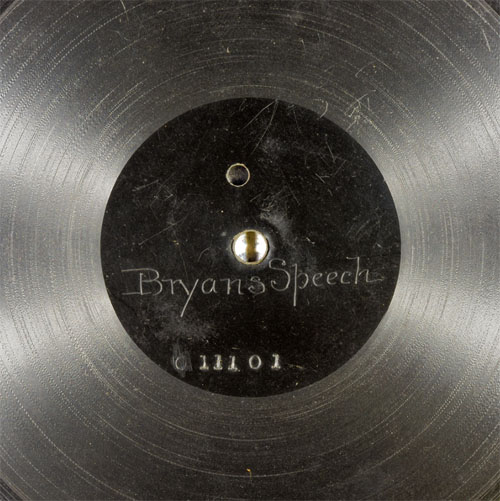 In the October 1900 edition of The Zon-o-phone Record in an article titled Campaign Records it was announced that records "which embrace the most notable utterances that have as yet been made during the campaign by the Presidential nominees" had been made, two of which were by Bryan: "Mr. Bryan's utterances on Our National Destiny (Record No. 9245), and on the Philippine Question (Record No. 9244) have been faithfully reproduced." 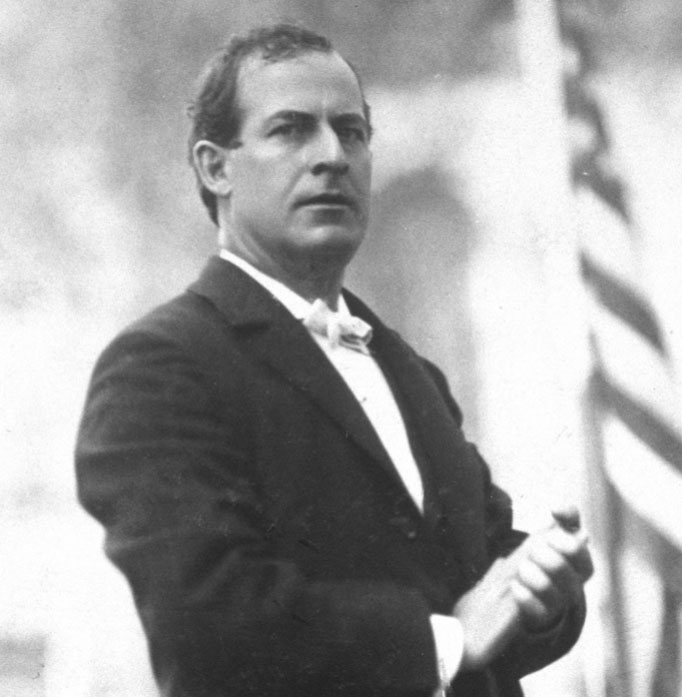 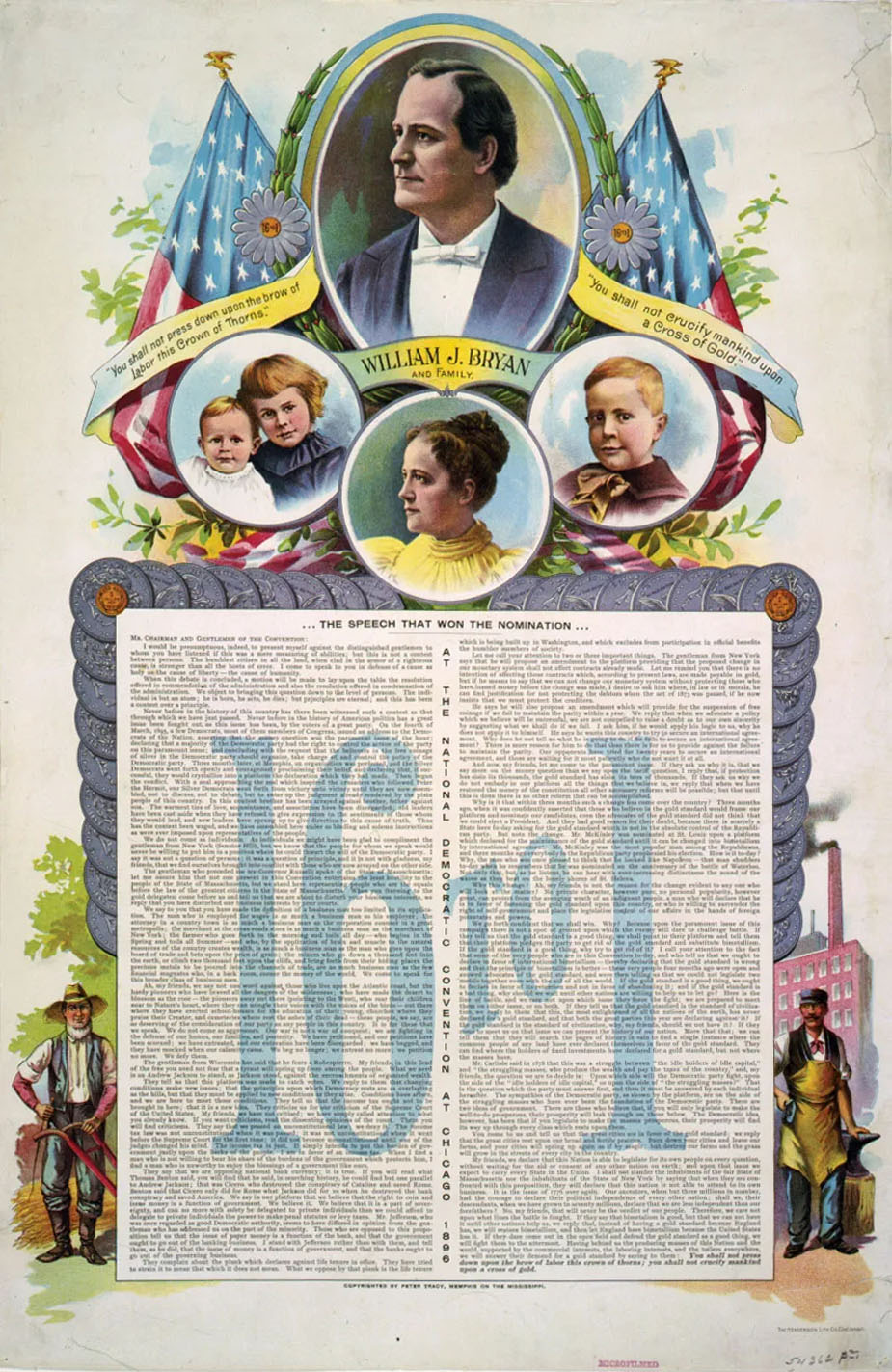 The 1908 Presidential Election: Bryan vs. Taft 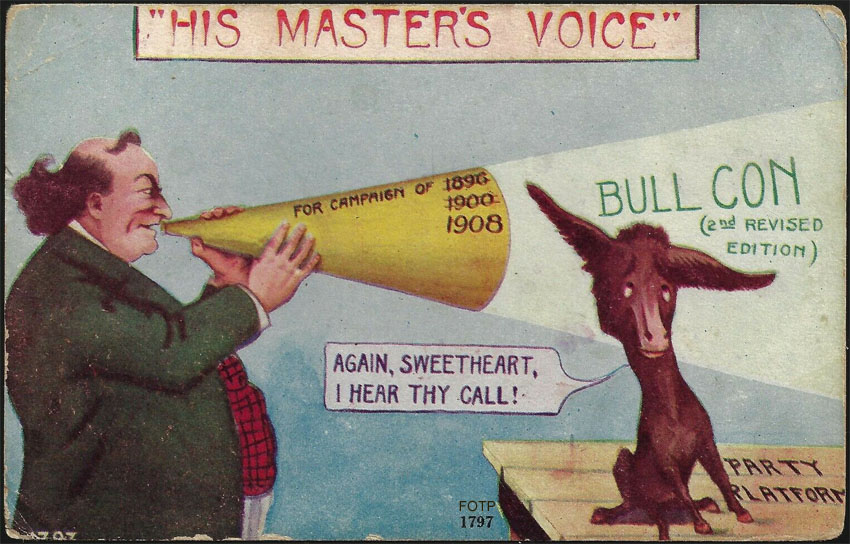 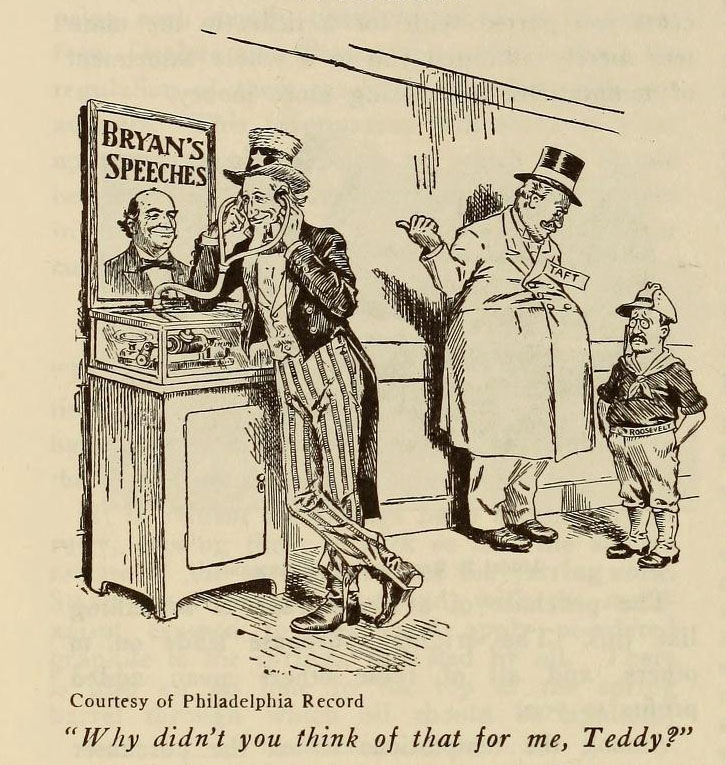 William Jennings Bryan, in his Presidential bid of 1908 recorded a series of cylinder phonograph records for the Edison Phonograph Company. In this cartoon, Taft is seen complaining that he has missed out on this innovative campaigning. The Edison Phonograph Monthly in September 1908, however, announced the release of 12 Edison Records by William H. Taft made at Virginia Hot Springs, after Mr. Taft delivered his speech of acceptance at Cincinnati. The EPM called this an announcement of great importance, noting that "no matter how the November election may result we shall have Records by the next President. This makes new history. It indicates progress."

The 1908 Presidential Election: Bryan vs. Taft

FACTOLA: "Now, for the first time, one can introduce the rival candidates for the Presidency in one's own home, can listen to their political views, expressed in their real voices, and make comparison." The Edison Phonograph Monthly, September 1908 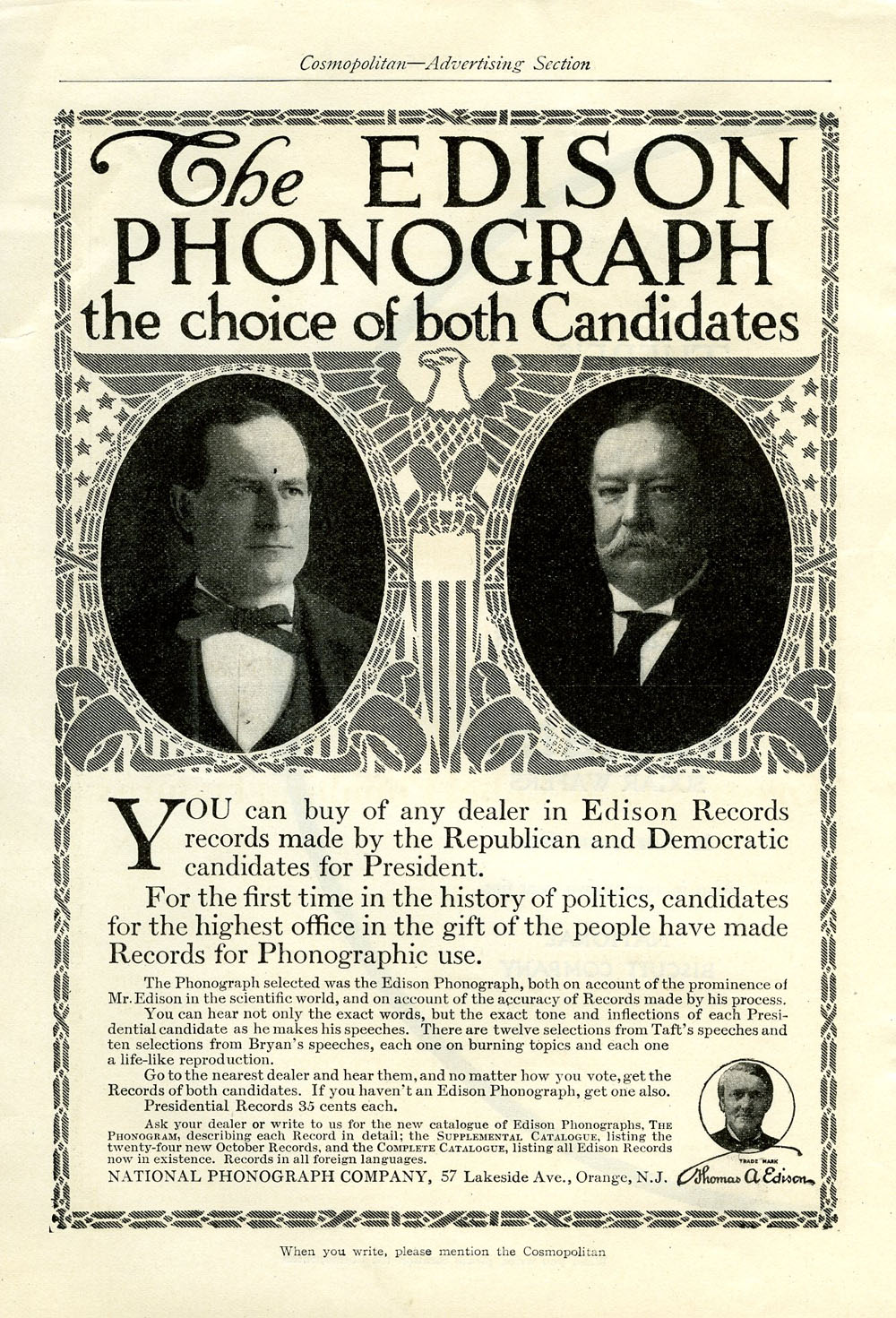 William Jennings Bryan died on July 26, 1925 just days after the conclusion of the Scope Trial which ended on July 21, 1925. The Scopes trial, "formally The State of Tennessee v. John Thomas Scopes, and commonly referred to as the Scopes Monkey Trial, was an American legal case from July 10 to July 21, 1925, in which a high school teacher, John T. Scopes, was accused of violating Tennessee's Butler Act, which had made it unlawful to teach human evolution in any state-funded school." (See Wikipedia, The Scopes Trial)

LISTEN to "The Monkey Doodle-Doo - Fox Trot" played by Busse's Buzzards, Victor Record 19934-B recorded 12-28-1925 (Label and Recording Courtesy of i78s.org and the Giovannoni Collection)