The Phonograph Lives! - The Voyagers

The Voyagers' Message in a Bottle

The Phonograph Lives! - Voyager 1 and Voyager 2

The revolution that began with the Phonograph is a continuum.

We still have record players and descendent technologies that record and reproduce sound waves.

But most remarkably, launched one hundred years after the invention of the phonograph, Voyager 1 and Voyager 2 are travelling in interstellar space each carrying a phonograph record that is Earth's "message in the bottle" and "greetings from Earth" (3). 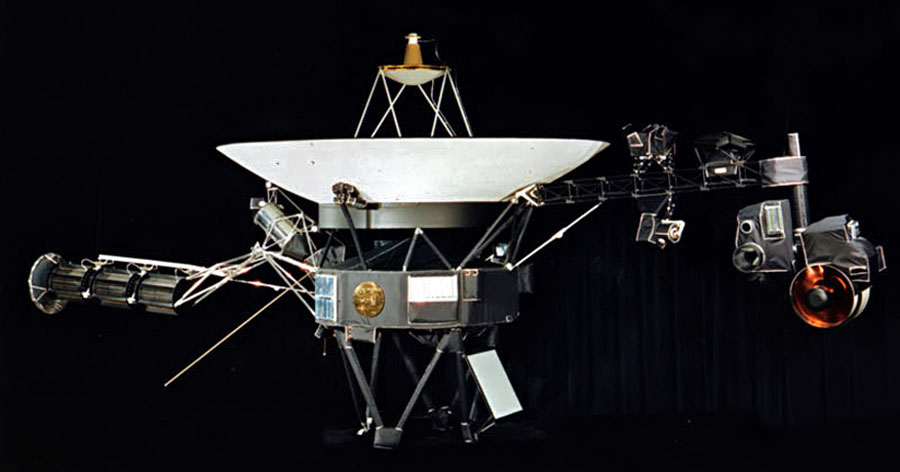 FACTOLA: Voyager 2 is a space probe launched by NASA on August 20, 1977 which now travels in interstellar space carrying a phonograph record known as the "Golden Record" that is Earth's "message in the bottle" and "greetings from Earth." (3)

FACTOLA: Voyager 1 launched on September 5, 1977 is now travelling in interstellar space and is also carrying a copy of the "Golden Record" that is Earth's "message in the bottle" and "greetings from Earth." (3)

FACTOLA: Voyager 1 and 2 were launched within months of being exactly 100 years after the invention of the Phonograph by Thomas Alva Edison. Both carry their "Golden Record" that is designed to play audio at 16-2/3 RPM using a phonograph needle and also display images from the grooves of the record. The images, sounds and music on the Voyager's "Golden Record" are intended to represent life on planet Earth. 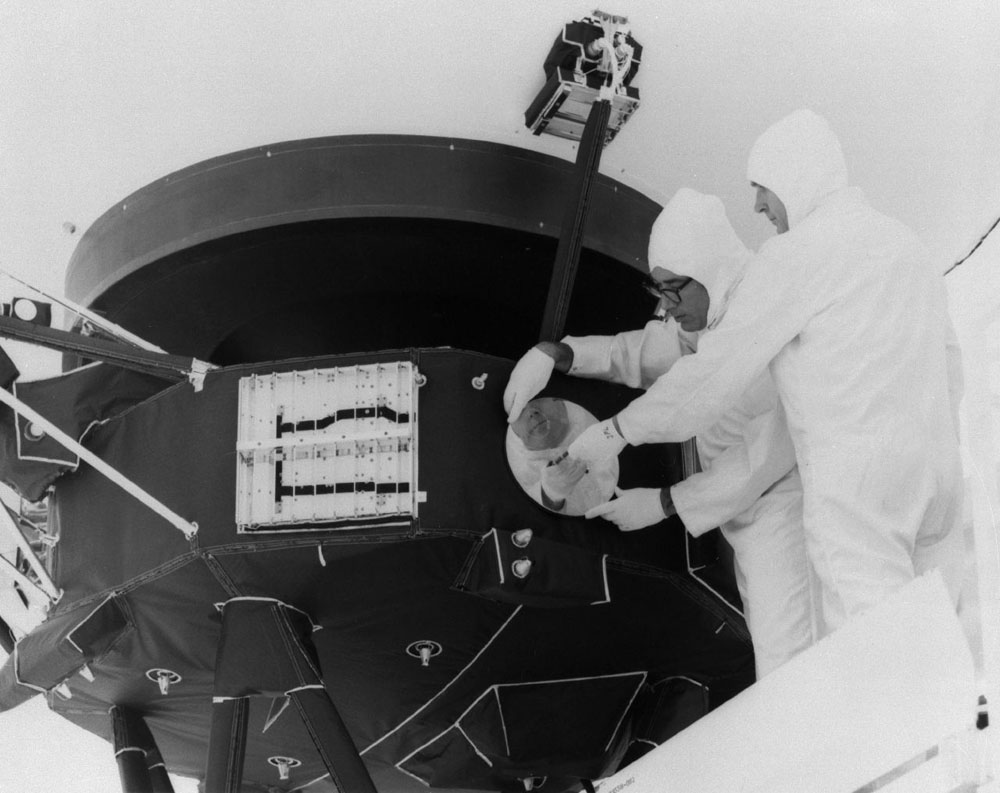 The "Golden Record" attached to the side of Voyager 1 (5) 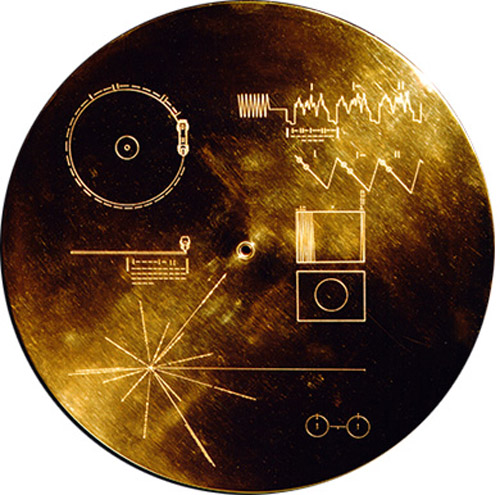 The audio of the Voyager's Golden Record is designed to be played at 16-2/3 revolutions per minute (this is the Golden Record's cover).

The following was provided by NASA/JPL on their Voyager web page regarding the record cover's instructions for extraterrestrial operation of the 'phonograph'.

The information in the upper right-hand portion of the cover is designed to show how pictures are to be constructed from the recorded signals. The top drawing shows the typical signal that occurs at the start of a picture. The picture is made from this signal, which traces the picture as a series of vertical lines, similar to ordinary television (in which the picture is a series of horizontal lines). Picture lines 1, 2 and 3 are noted in binary numbers, and the duration of one of the "picture lines," about 8 milliseconds, is noted. The drawing immediately below shows how these lines are to be drawn vertically, with staggered "interlace" to give the correct picture rendition. Immediately below this is a drawing of an entire picture raster, showing that there are 512 vertical lines in a complete picture. Immediately below this is a replica of the first picture on the record to permit the recipients to verify that they are decoding the signals correctly. A circle was used in this picture to ensure that the recipients use the correct ratio of horizontal to vertical height in picture reconstruction. 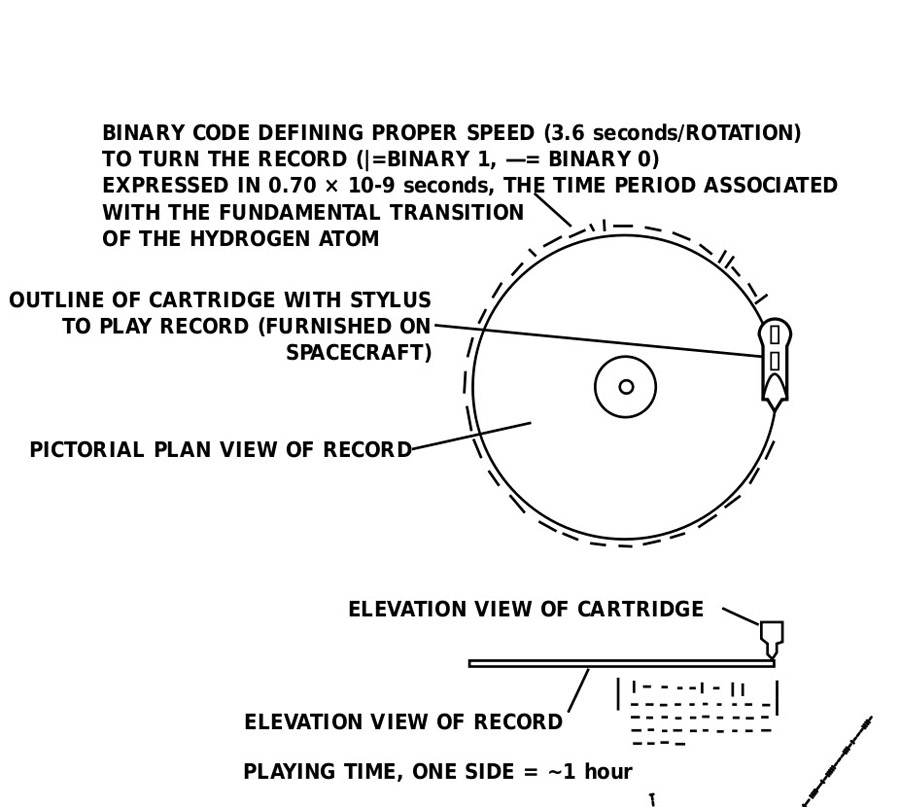 Images, sounds and music on the Voyager's "Golden Record" are intended to represent life on planet Earth. However, as Carl Sagan noted, the record will only be played "if there are advanced spacefaring civilizations in interstellar space") (6)

FACTOLA: The "Golden Record" may never be played. But there is still the mind-bending possibility that the Voyager record will exist longer than humans on Earth.

Visit the Jet Propulsion Laboratory (JPL) website, read more about the "Golden Record" and see real-time numbers of how far these golden records have travelled. 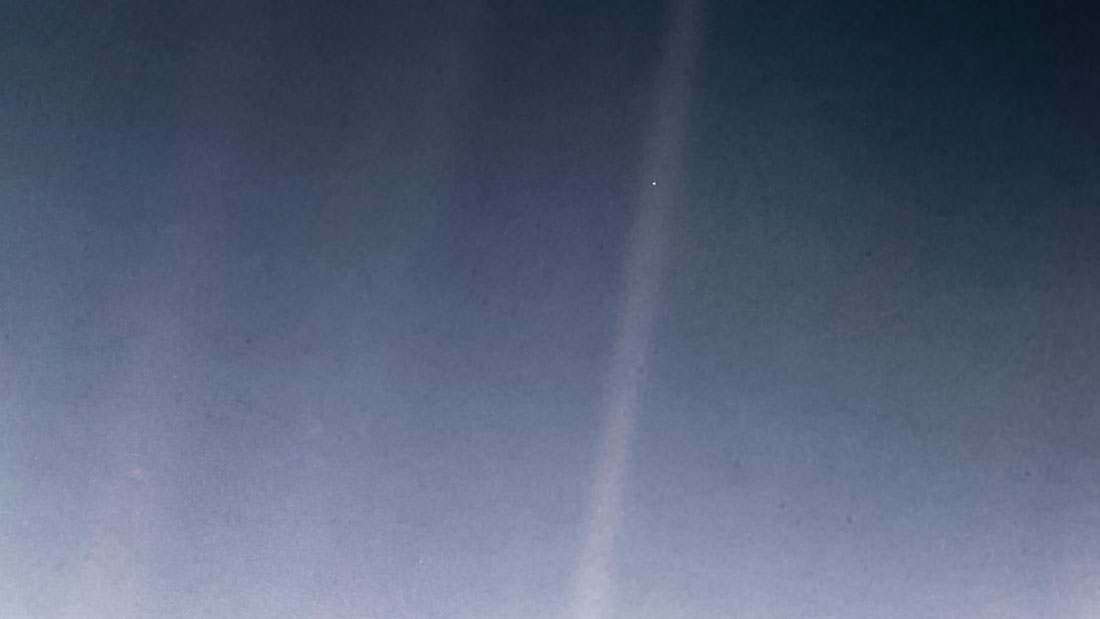 The Pale Blue Dot is a photograph of Earth taken Feb. 14, 1990, by NASAs Voyager 1 at a distance of 3.7 billion miles (6 billion kilometers) from the Sun. The image inspired the title of scientist Carl Sagan's book, "Pale Blue Dot: A Vision of the Human Future in Space," in which he wrote: "Look again at that dot. That's here. That's home. That's us."

The Voyager Golden Record has been released as a 3 translucent gold 140 gram vinyl LPs boxed set by Ozma Records. Also included is a full-color 96-page softcover book containing all images included on the original Voyager Interstellar Record, gallery of images transmitted back from the Voyager probes, and a new essay by Timothy Ferris, producer of the original golden record. 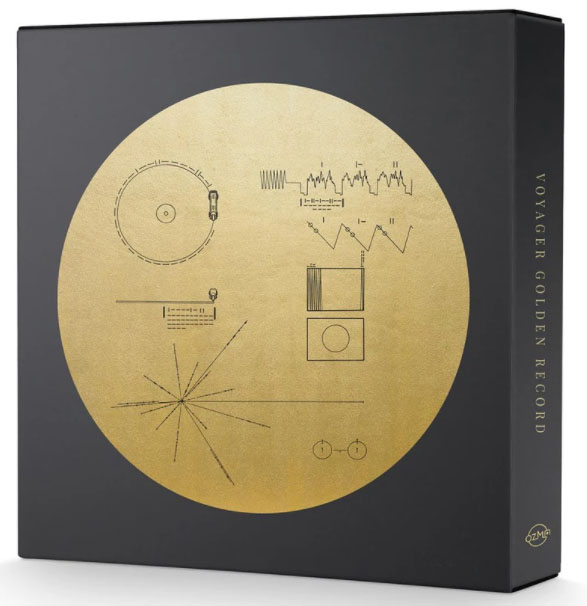 Visit here for the list of music on the Golden Record, one of which is "Johnny B. Goode," written and performed by Chuck Berry), (Courtesy of Voyager NASA Jet Propulsion Laboratory California Institute of Technology.)

FACTOLA: On April 22, 1978 NBC's Saturday Night Live did a skit "Next Week in Review" which reported what would be the biggest news story of the year, namely that "a foreign planet" had sent a message to Earth "the FIRST positive proof that other intelligent beings inhabit the universe." They apparently had found the Voyager spacecraft, listened to its Golden Record and had now communicated four words to Earth: Send More Chuck Berry.