The World's Columbian Exposition of 1893 and the Phonograph 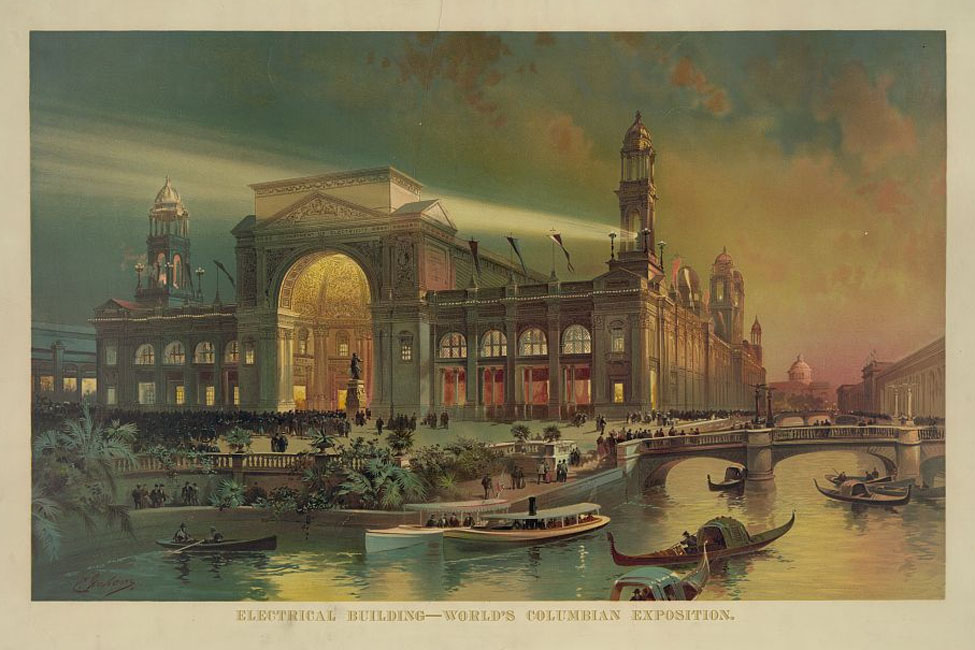 The Electricity Building of the 1893 World's Columbian Exposition 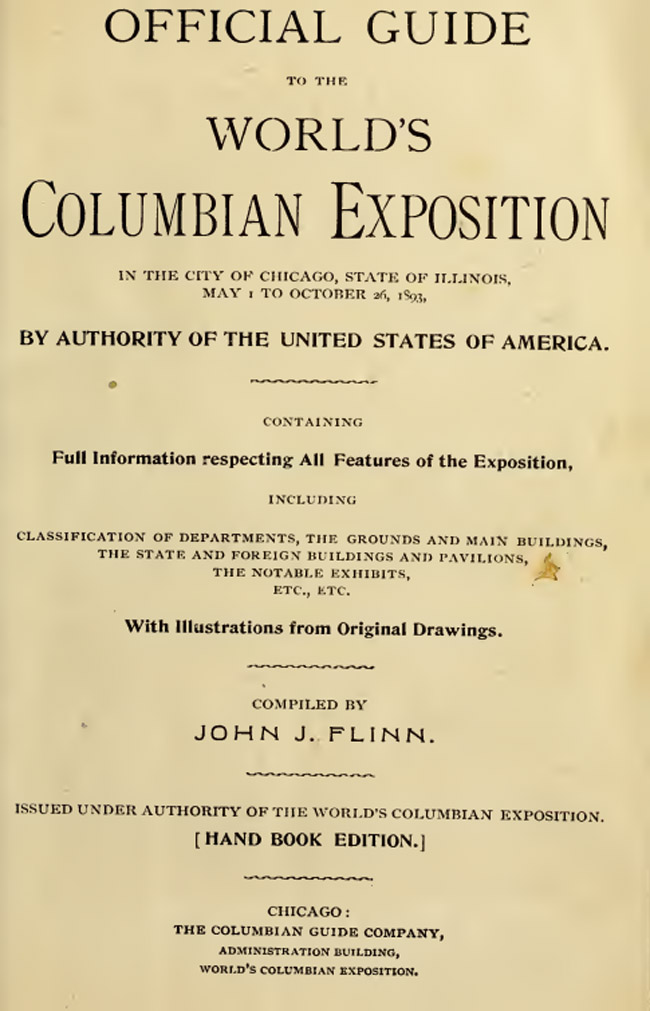 Copyright, 1893, by the World's Columbian Exposition 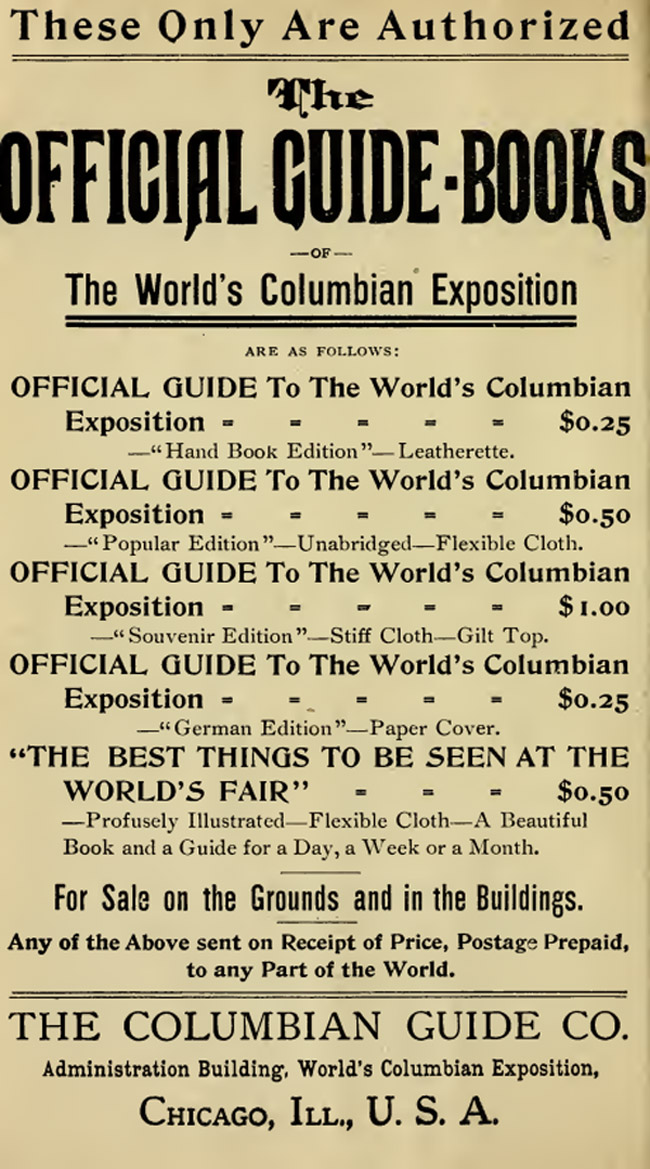 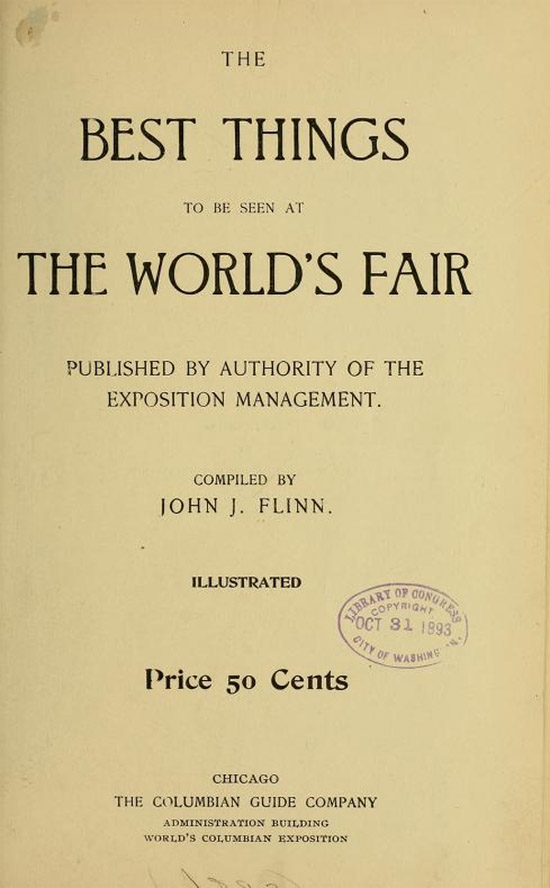 The Best Things To Be Seen At The World's Fair, June 1893

Edison had other exhibits at the fair besides his phonographs such as Edison's dynamos, electric domestic appliances, and his famous quadruplex. Edison was granted a concession from the fair for one hundred and fifty Kinetographs (i.e., Kinetoscopes).

Dynamos were installed by Edison as one of the companies to provide arc lighting and power for the fair. 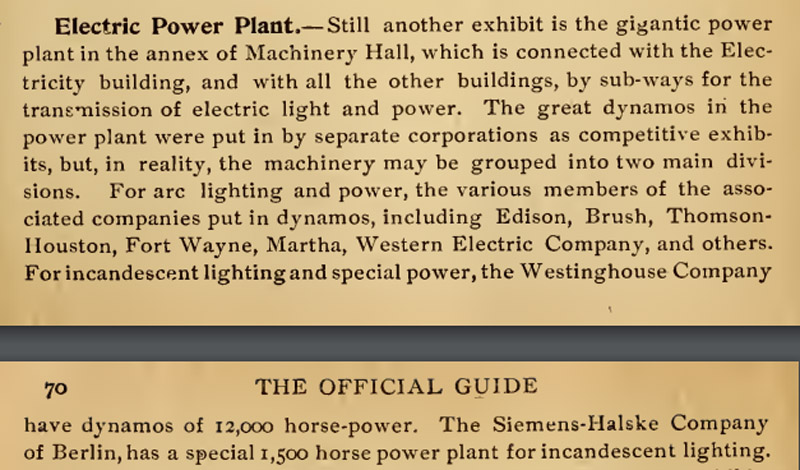 Applicances, such as those in the kitchen of the Electric House in in the Electricity Building included those made by The Edison company. 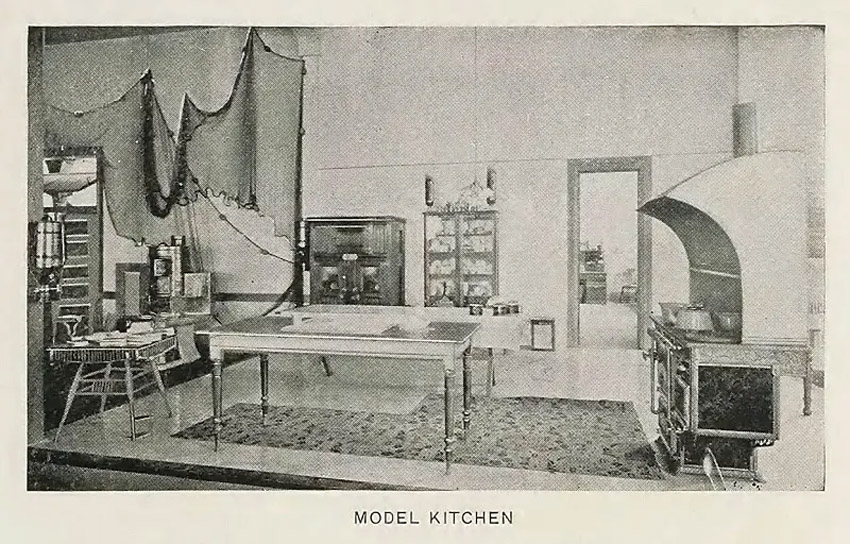 The model kitchen powered by electricity. (Image from Bancroft, Hubert Howe The Book of the Fair. The Bancroft Company, 1893.) (1) 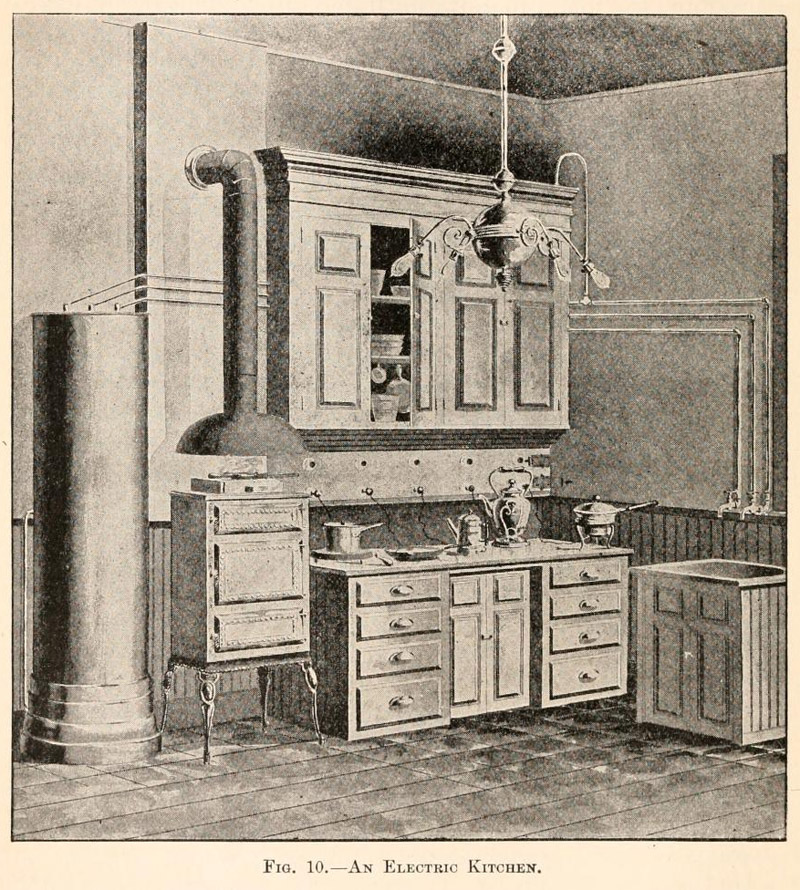 Edison's quadruplex mechanism was on display in the Electricity Buildings exhibit of telegraph and telephone service.

Edison's Phonograph was on display in The Electricity Building.

Edison's kimetograph (sic) (kinetoscope) was intended to be on display.

The Phonograph for Business

Typewriters became more closely associated with the phonograph as the phonograph industry promoted itself as an essential part of the modern business office. The phonograph for dictation was seen as the new business standard for composing a letter to be then transcribed by the secretary listening to the phonograph and typing the letter. Typewriter ads in the early 1890's regularly appeared in the official trade magazine of the phonograph, The Phonogram. 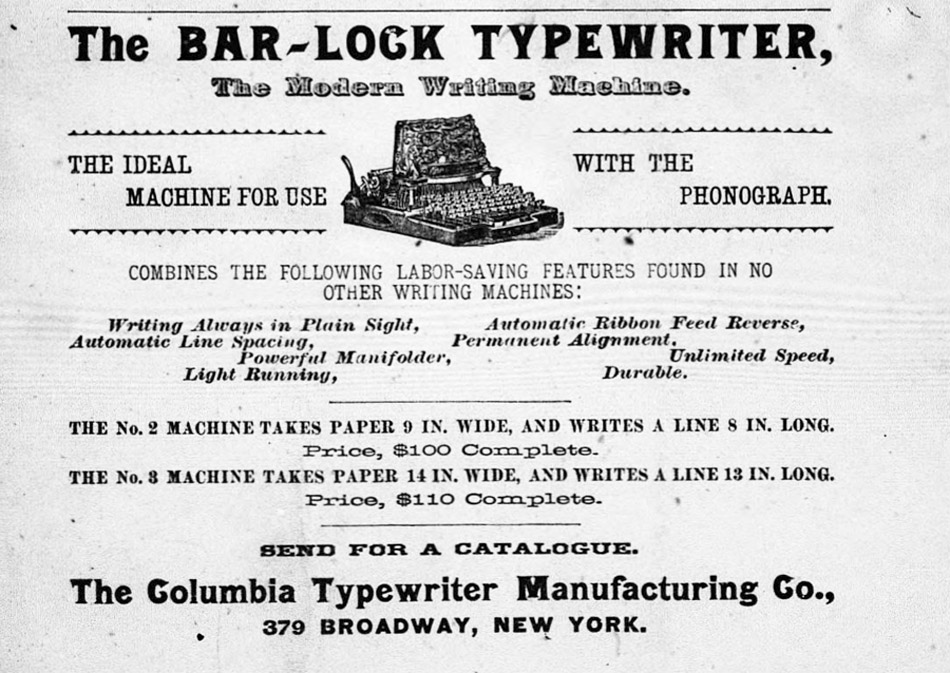 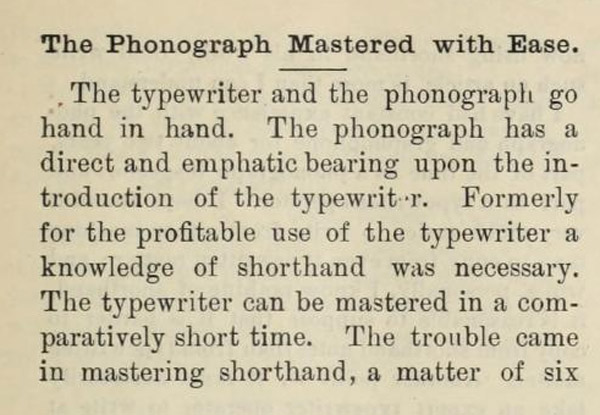 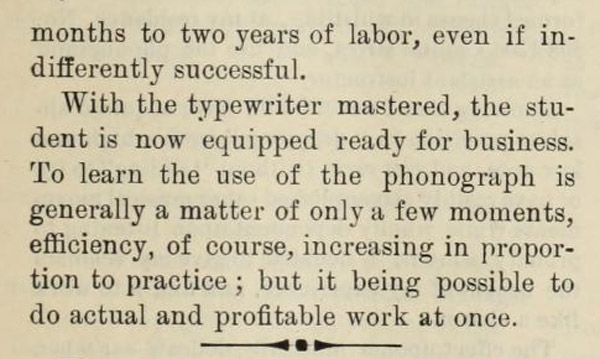 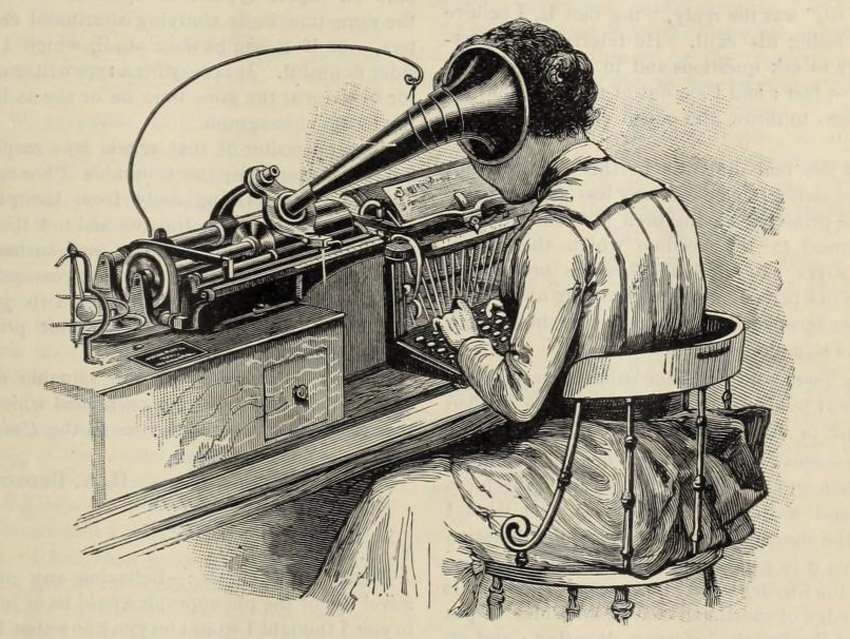 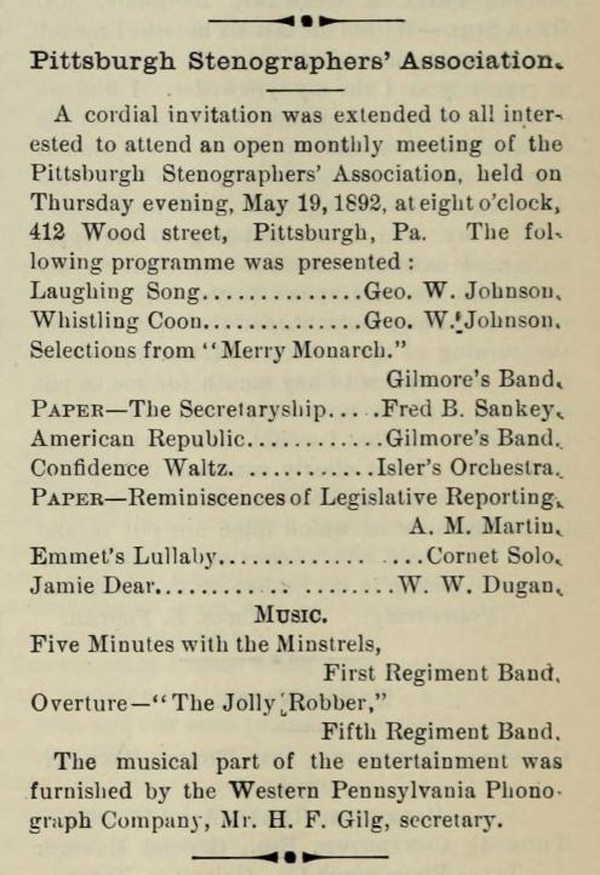 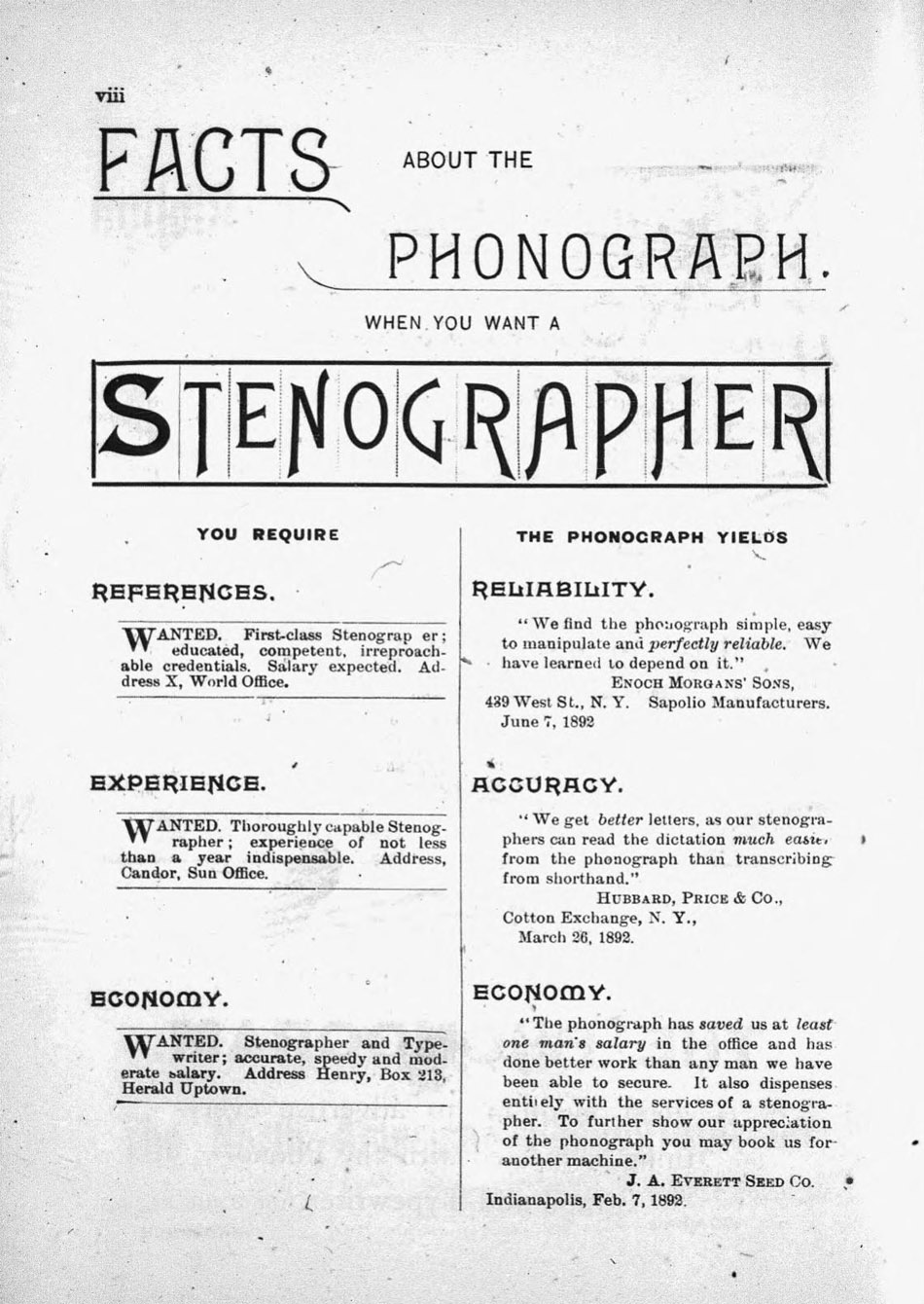 A controversy occurred at the Exposition in August as it was reported that "a phonograph firm" advertised it is using the Smith-Premier typewriting machine. Remington responded by withdrawing many of their machines for use at the exposition.

Programs and demonstrations of the phonograph were important ways for the talking machine industry to promote the value and versatility of the phonograph as an entertainer, an educator, and a commercial machine for business letters. The following is how the Chicago Tribune reported one of these events. 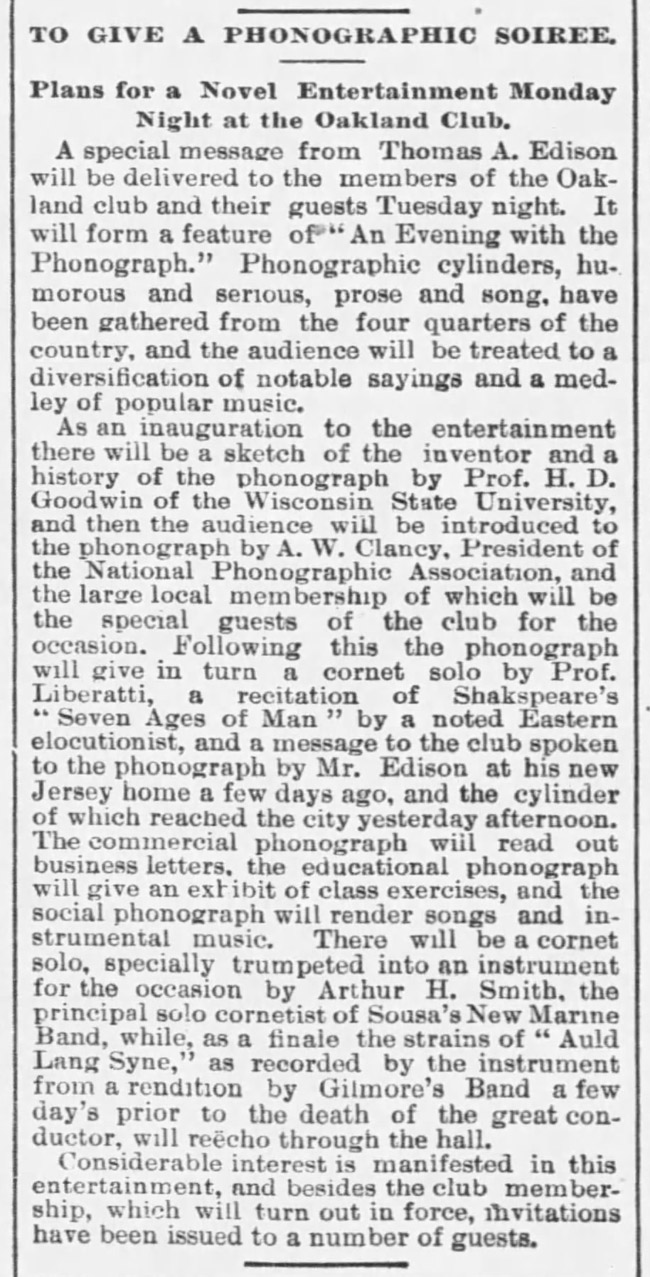 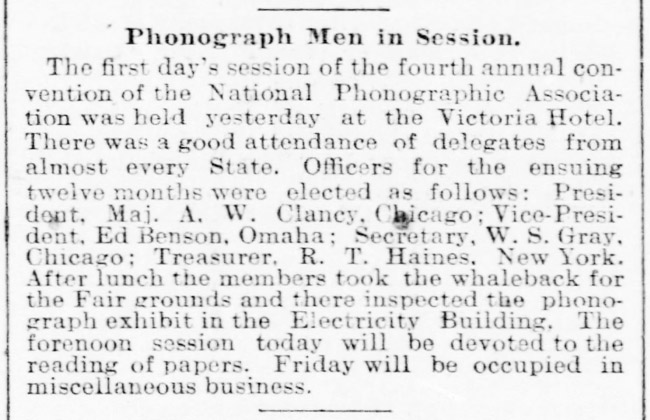 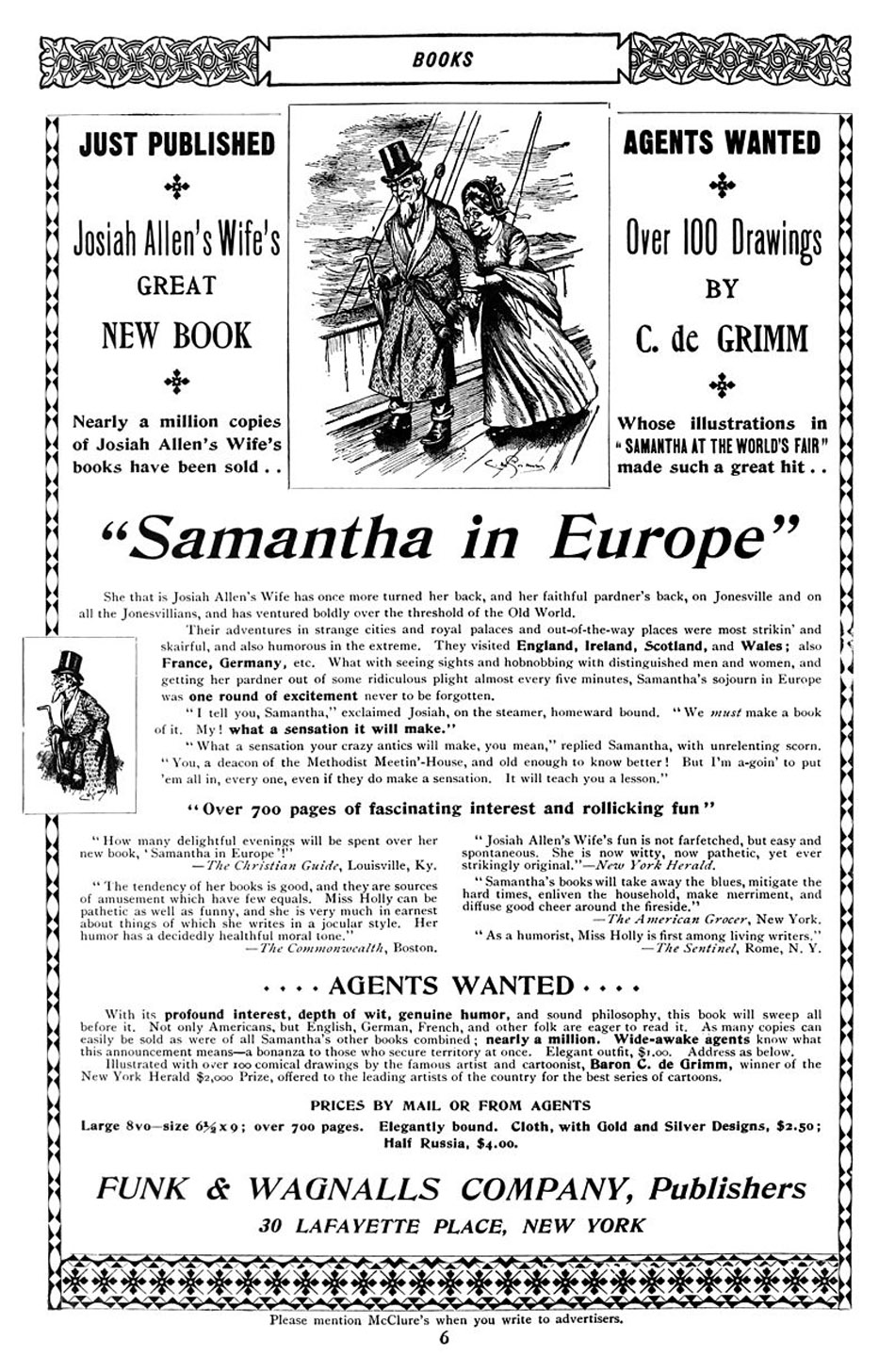 Advertisement in the January 1896 issue of McClure's Magazine 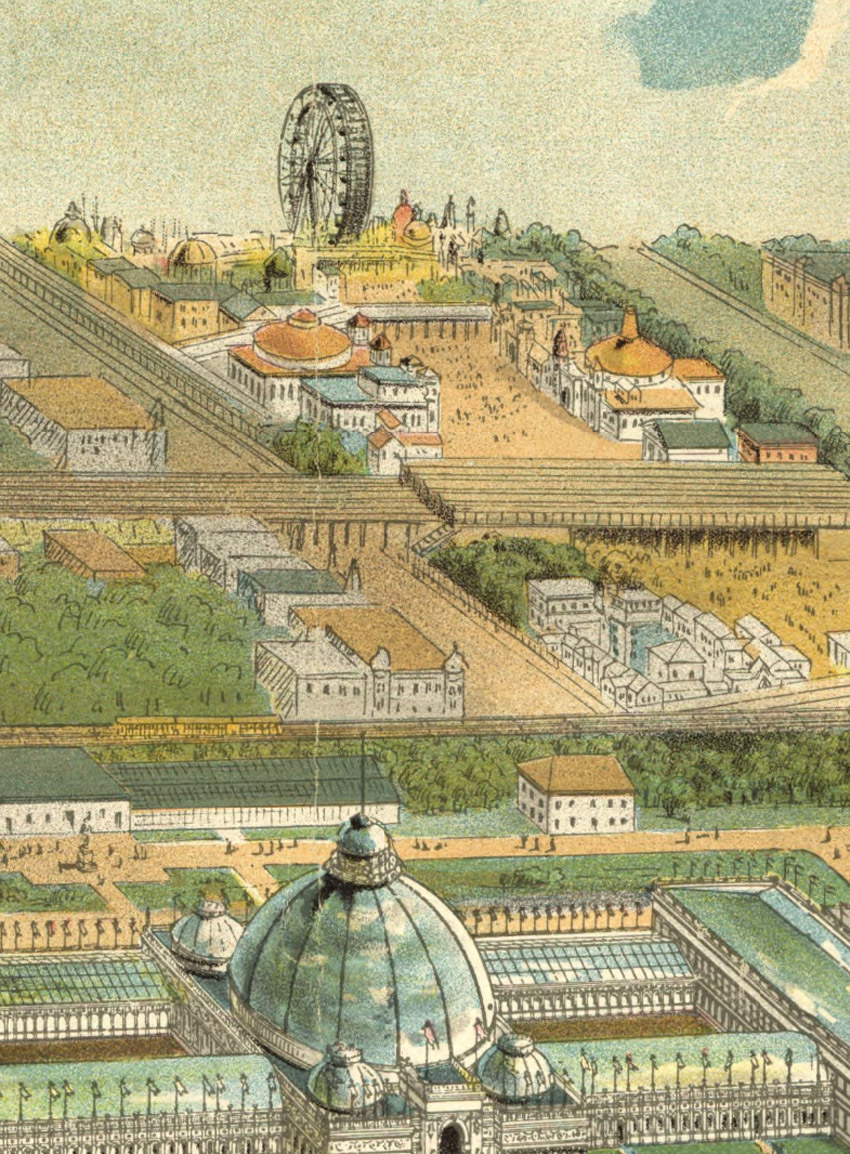 From a Bird's eye view of the Midway Plaisance, Rand McNally and Company, 1893 (Courtesy Library of Congress)

The Bernese Alps Cyclorama on the Midway Plaisance used a phonograph as part of its cycloramic form "to make the deception complete, as one's ears are greeted with the strains of a Swiss ballad seeming to proceed from the maid."

The Best Things To Be Seen At The World's Fair

Published by Authority of the Exposition Management, 1893 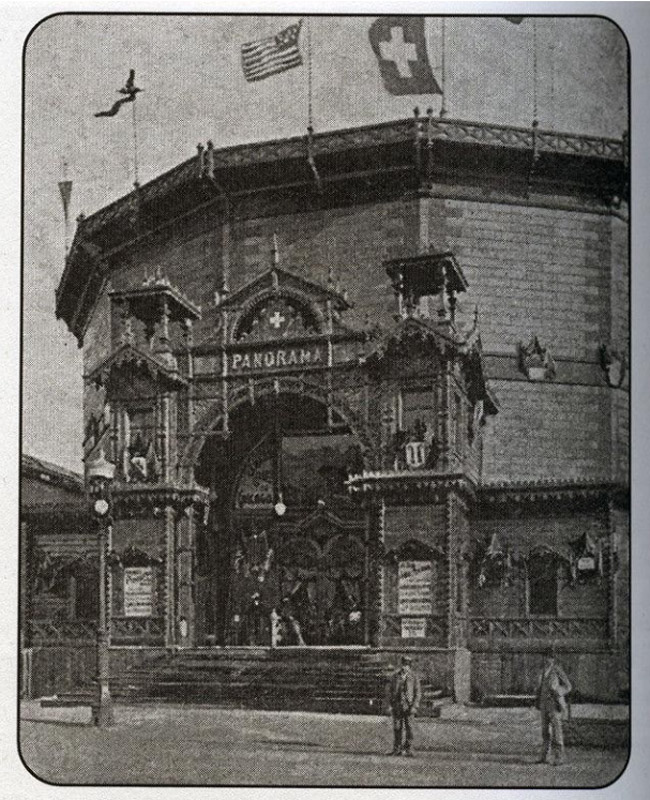 FACTOLA: The 1893 Bernese Alps Cyclorama at the World's Columbian Exhibition in Chicago was the first World's Fair "multi-media attraction" to use recorded sound as part of its presentation with a milkmaid singing a Swiss ballad. The Cyclorama on the Midway Plaisance used a phonograph as part of its cycloramic form "to make the deception complete, as one's ears are greeted with the strains of a Swiss ballad seeming to proceed from the maid."

Phonographs on the Midway Plaisance at the World's Fair - Disclaimer 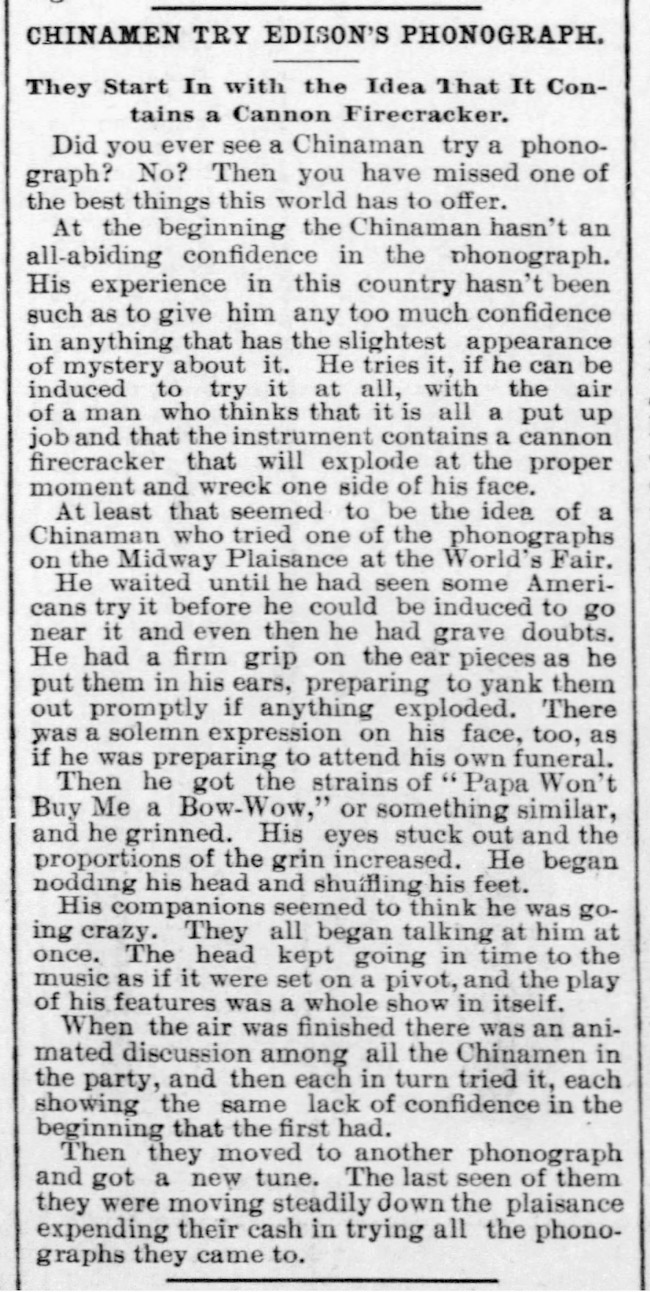 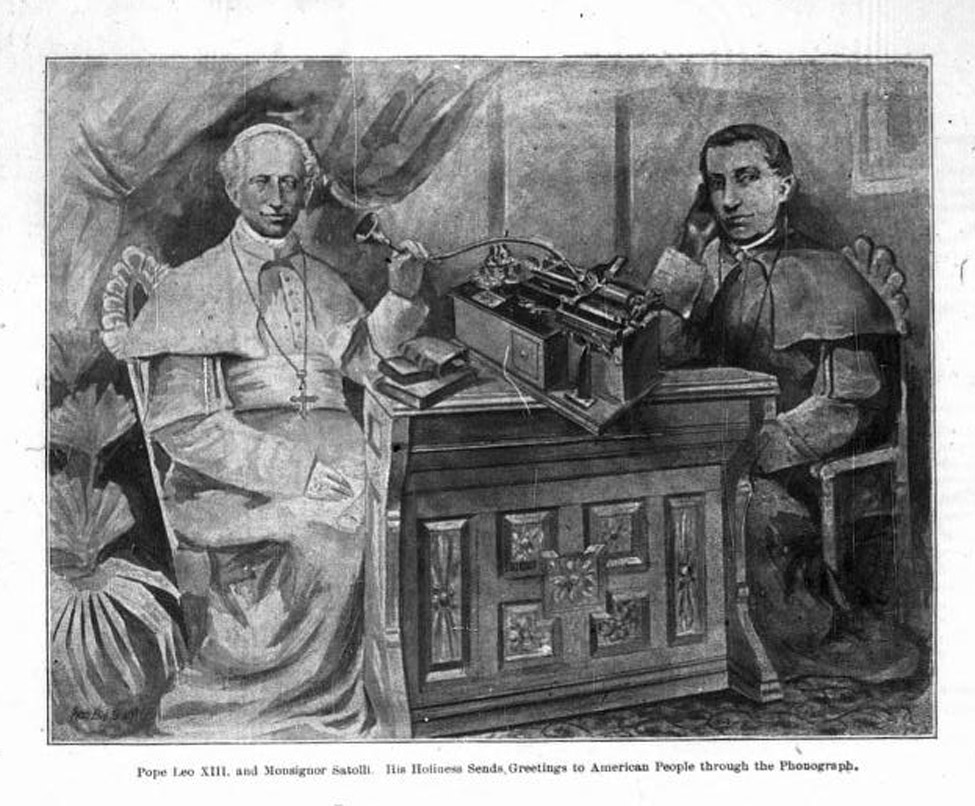 Pope Leo XIII sends greetings for the opening of the World's Columbian Exposition.

The Phonogram, March and April 1893 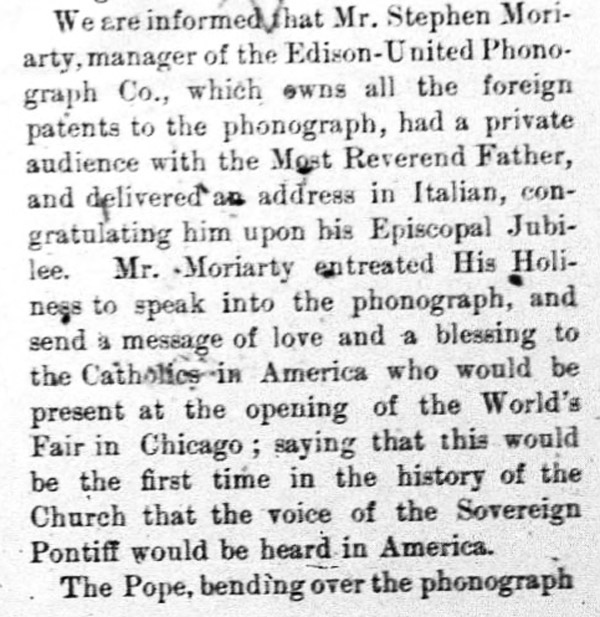 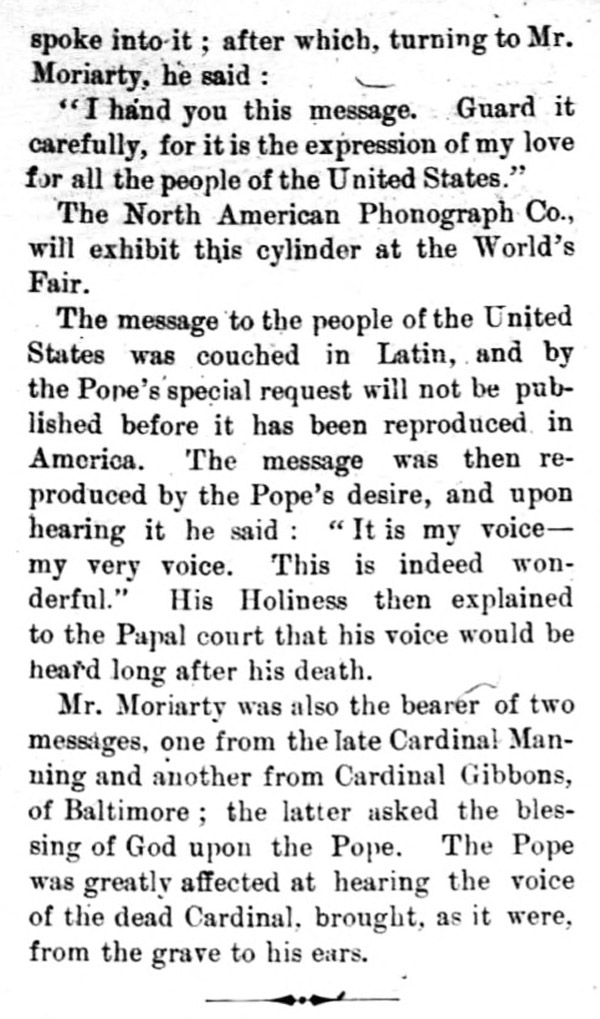 The following is Scientific American's May 20, 1893 article (with an engraving from the London Graphic of the Pope's Phonographic Message to America. 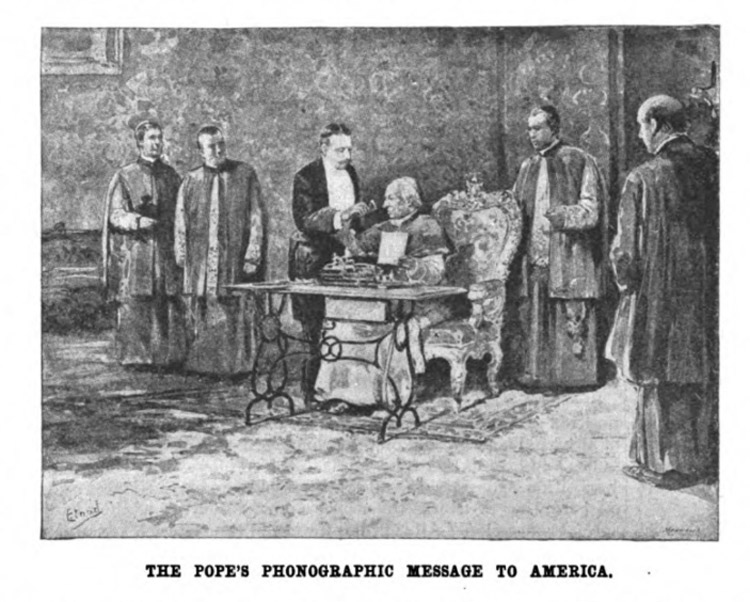 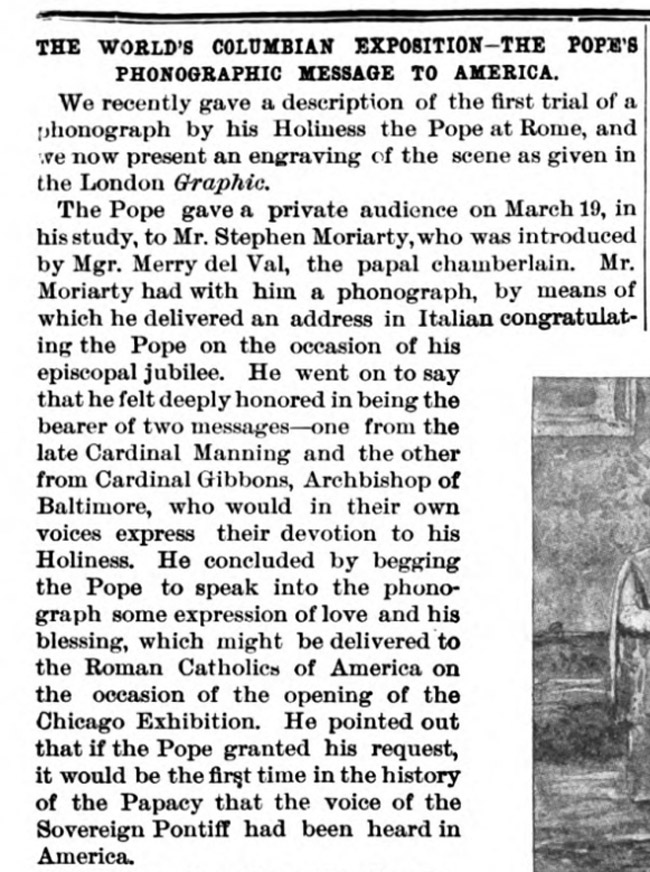 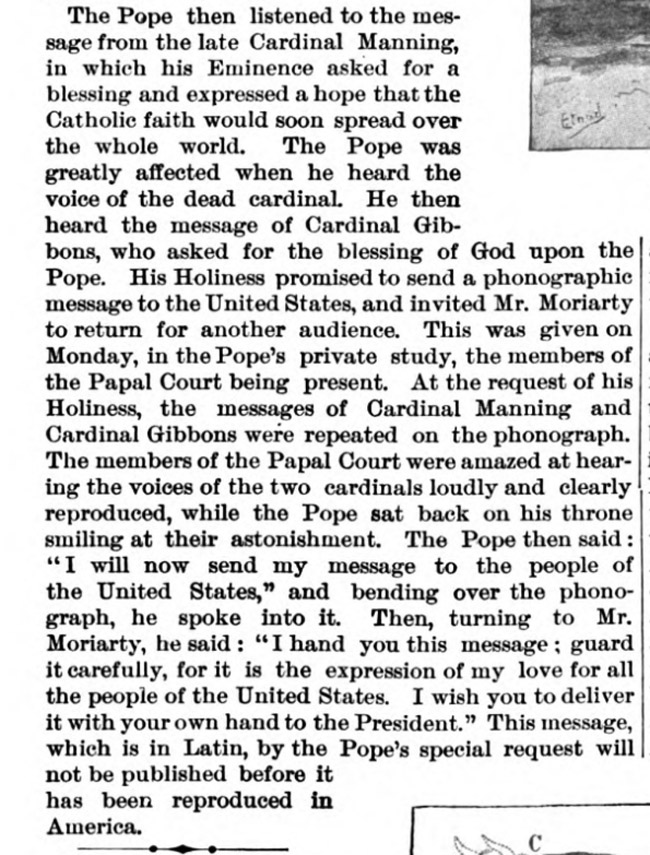 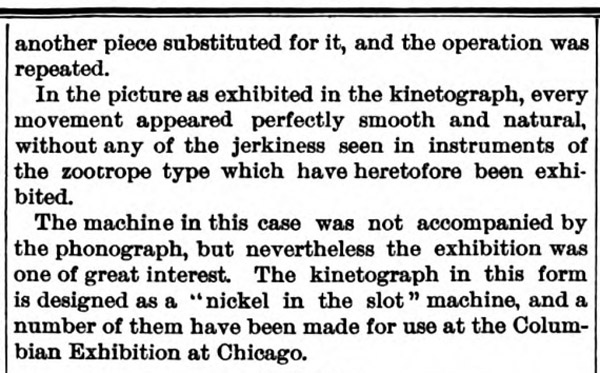 The Kinetograph - A refinement of Plateau's phenakistoscope and Muybridge's Zoopraxiscope

The first public exhibition of the kinetograph included the lecture by Mr. George M. Hopkins who explained how the kinetograph worked. "This apparatus is the refinement of Plateau's phenakistoscope or the zootrope...In addition to Plateau's experiments, I might refer to the work accomplished by Muybridge and Anschuetz, who very successfully photographed animals in motion...But these instruments, having but twenty-five or thirty pictures for each subject...could not make the image appear like a continuous photograph of moving things. In Mr. Edison's machine far more perfect results are secured." 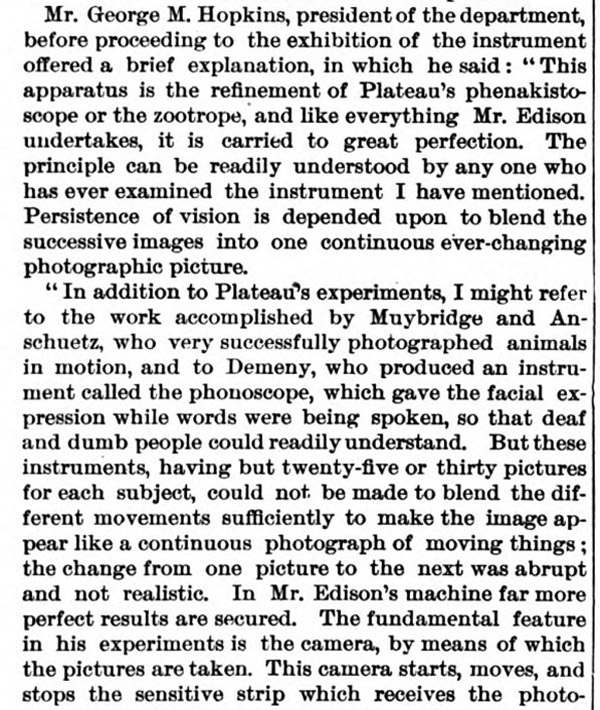 At the World's Columbian Exhibition on the Midway Plaisance and "directly to the east of the Streets of Cairo was the Zoopraxographical Hall. The building was considered by many film historians to be the first commercial movie theater. Eadweard Muybridge, an English photographer who was born Edward James Muggeridge, used the hall to demonstrate his Zoopraxiscope. Muybridge invented the Zoopraxiscope in 1879 and used it at the many lectures he would give around the world. The Zoopraxiscope combined photography, the Magic Lantern (projected still images) and both the Zoetrope (spinning drums) and Phenakistiscope (spinning discs)." (Text and video courtesy of Friends of the White City)

Visit to see Compleat Eadweard Muybridge: Chronology 1893-1904 (including references to letters/communication with Edison) 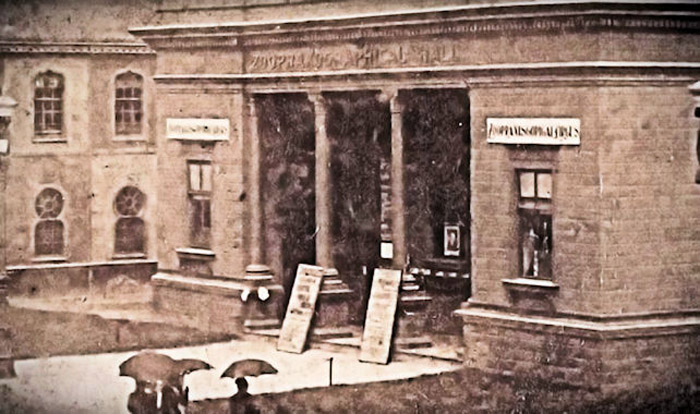 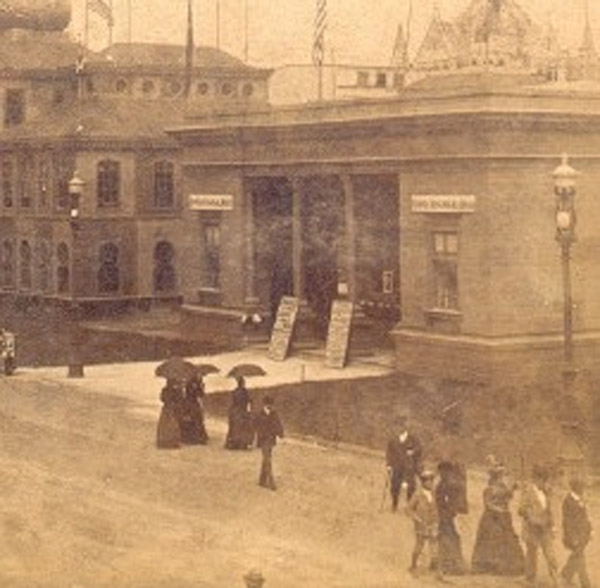 Stereo view of the Zoopraxigraphical Hall at the World's Fair in Chicago. Shows the hall where Muybridge gave lectures and sold photographs. 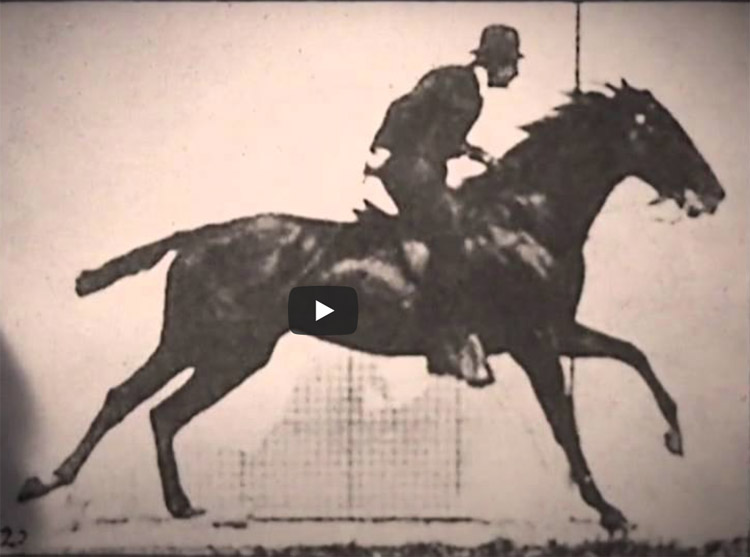 (1 ) "The exposition was an influential social ..." Wikipedia - The World's Columbian Exposition

(2) The Class M Phonograph, "primarily for commercial use but would also have been in a few homes." George L. Frow and Albert F. Sefl write the following:

"The electric phonographs of these early years were being constantly modified according to members of the trade, and pass through a somewhat "grey" period from 1890 to 1892, until in 1893 two North American Phonograph Company catalogues - this was an Edison concern - and The Phonogram (U.K.), edited by J. Lewis Young, show the Edison electric phonographs and also the water and treadle types, offered in different outfits for both the home and the office. Initially its use had been limited to commercial and business dictation, then the coin-slot trade began to take an interest in it, but it was slow to come into the home, the high cost being the chief reason.

Gone were the spectacle frames, except for office use, in fact the 1893 catalogues of the North American Company showed a handful of 'Residence Outfits' near-commercial phonographs offered in elaborate cabinets, in reality heavily carved and sophisticated forms of office desks. By 1895 Residence Outfits had become "domestic Outfits', and the phonographs denoted CLASS 'M' and CLASS 'E'.

(3) "but many coin-in-the slot machines are likely to be scattered through the premises." The Phonogram, March-April, 1893 p. 355