The Christmas of the Phonograph Records by Mari Sandoz

This is one of my favorite books and it's as much a part of our family Christmas tradition as reading The Night Before Christmas. Mari Sandoz calls this story "A Recollection" and the illustrations below by James W. Brown provide a few highlights of the story.

Mari grew up on a western Nebraska government claim and life at the beginning of the twentieth century could be harsh and isolated, particularly in the winter. Mari's father Jules purchases a Phonograph with inheritance money and neighbors come from miles away during the Christmas holiday to listen to the wonderous machine. Mari's mother is distressed over the extravagance of this purchase since the children need overshoes and there is a mortgage to be paid. But Mari notes that her mother's eyes shined when she listened to the music of the phonograph with "excitement I had never seen in them."

The following is the opening page from Mari Sandoz's recollection The Christmas of the Phonograph Records:

It seems to me that I remember it all quite clearly. The night was very cold, footsteps squeaking in the frozen snow that had lain on for over two weeks, the roads in our region practically unbroken. But now the holidays were coming and wagons had pushed out on the long miles to the railroad, with men enough to scoop a trail for each other through the deeper drifts.

My small brother and I had been asleep in our attic bed long enough to frost the cover of the feather tick at our faces when there was a shouting in the road before the house, running steps, and then the sound of the broom handle thumping against the ceiling below us, and father booming out, "Get up! The phonograph is here!"

The machine was varnished oak, with a shining cylinder for the records, and a horn, "a great black, gilt-ribbed morning glory, and the crazy angled rod arm and chain to hold it in place." After the phonograph was unpacked and set up in the kitchen-living room a brown wax cylinder was removed from its round paper container and slipped onto the machine. The machine's handle was carefully cranked, and the needle set down.

"Everybody waited, leaning forward. There was a rhythmic frying in the silence, and then a whispering of sound, soft and very, very far away.

It brought a murmur of disappointment and an escaping laugh, but gradually the whispers loudened into the sextet from Lucia, into what still seems to me the most beautiful singing in the world."

Other records were then played and many records are identified since the phonograph and all of the holiday festivities with neighbors and family enjoying the phonograph's entertainment are the heart of this story.

The story closes some time later on a warmish day with Mari going out to the well to fill the water pail but leaving the door to the house open. Their big old sow pushed her way into the house, knocked down the record cabinet and chomped down the wax records, boxes and all. A sad ending...but a must read for all Friends of the Phonograph! 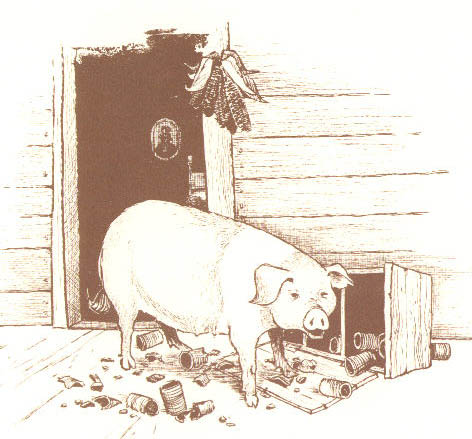 See Referenced Records for a listing of the cylinder records identified in The Christmas of the Phonograph by Mari Sandoz.

FACTOLA: In Mari Sandoz's "recollection" short story The Christmas of the Phonograph Records her father's extravagant and much anticipated Phonograph is delivered to their isolated homestead in western Nebraska just in time for Christmas. The first cylinder record they play is the Sextette from Lucia. Mari remembers that moment of hearing Lucia as "what still seems to me the most beautiful singing in the world."