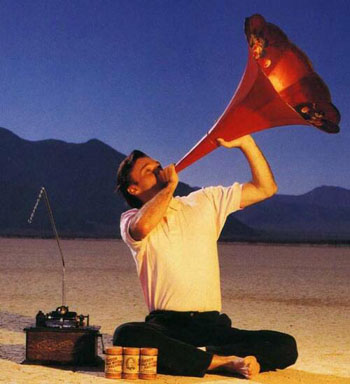 My phonographia collection began when I bought a Victrola at age twelve with money from my paper route. Auctions and garage sales were early sources for adding to the collection but with budget constraints I didn't pursue many machines and certainly not rare ones.

Through the years my collecting interests took some turns but collecting always revolved around phonographs and related ephemera.

And why this fascination with talking machines, recorded sound and phonograph ephemera?

First, the phonograph is based on a very simple technology yet what it did was revolutionary and magical. It was revolutionary because it changed human's perception of sound. It was a wonder and magical because it was initially an example of Arthur C. Clark's adage known as his Third Law, i.e., "Any sufficiently advanced technology is indistinguishable from magic." As the phonograph moved into the home, however, it became part of everyday life and lost its magic. 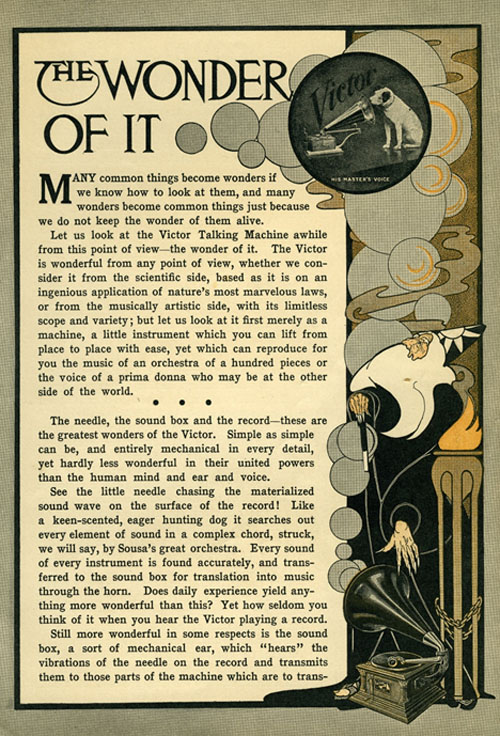 Victor Advertising Brochure 1906 - "Does daily experience yield anything more wonderful than this?"

Second, the phonograph is an interesting example of how one invention can produce so many popular culture ripples and connections -- and not just for one generation. In fact, the phonograph has played in every decade since its invention and still plays music from its grooves today and is enjoyed by the vinyl enthusiasts of the 21st century. The phonograph's advertising themes likewise were repeated each decade up to the present. Descendent home entertainment devices continued the phonograph's advertised promise of offering personal entertainment to anyone, anytime and as often as you wanted.

And third, early phonographs, such as morning-glory horn machines and stately Victrolas, are icons of recorded sound and home entertainment. As icons of the past they are reminders of how technologies are introduced, promoted, and evolve leaving their story to be told by museums, social and cultural historians, and collectors. (5A)

As part of the "home is your castle" consumerism the phonograph offered everyone in the family the "best seat in the house." That theme has been in home entertainment ads since the mid-1890's and has never stopped.

Every new home entertainment device since the phonograph has promoted that "best seat" message in one way or another - the phonograph with its multiple record speeds and hundreds of millions of records; the radio; the television; the tape recorder; VCRs, CDs, Laserdiscs and CED Video Discs, DVDs, audio books, music streaming services, etc. -- each of these sound and entertainment providers continued the phonograph's revolutionary promise that your home could be your own "Stage of the World" -- all entertainment experiences were available to you as if you were a king, or a millionaire or the possessor of Aladdin's Lamp. 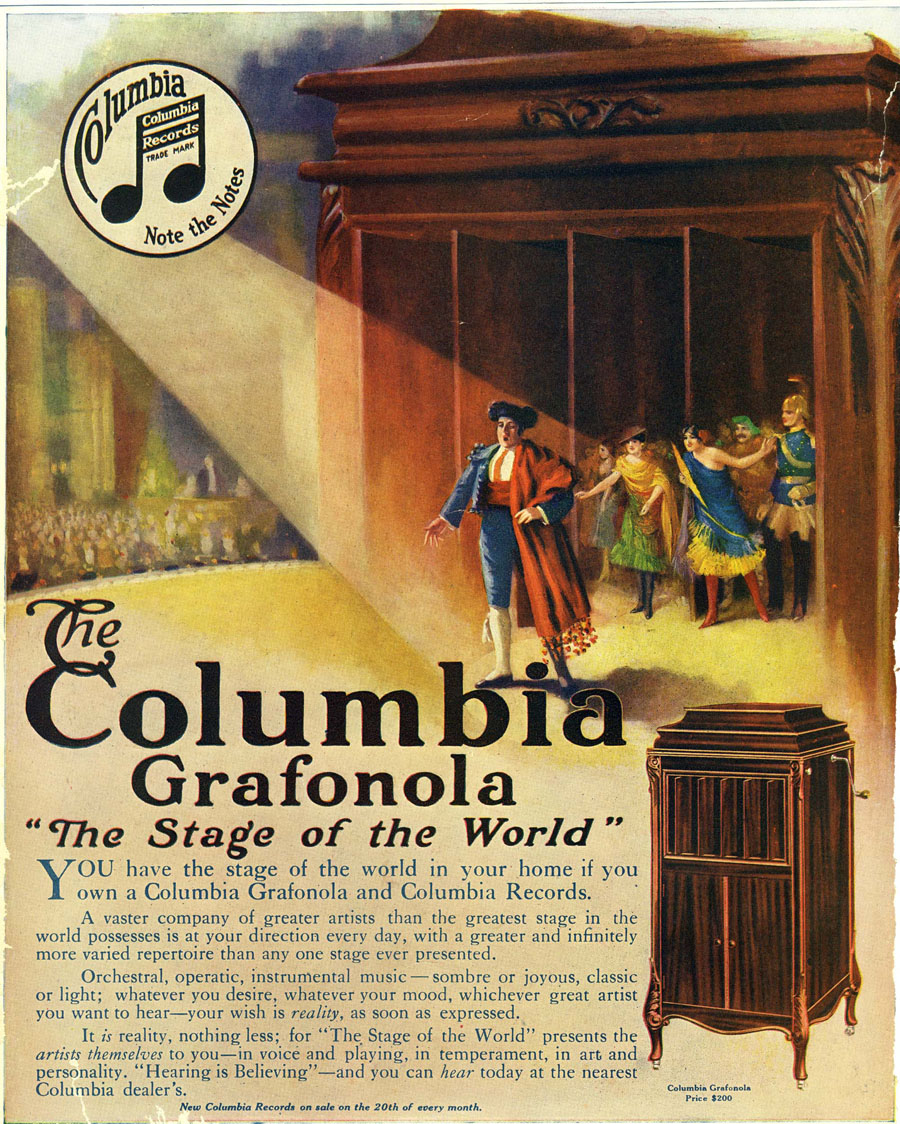 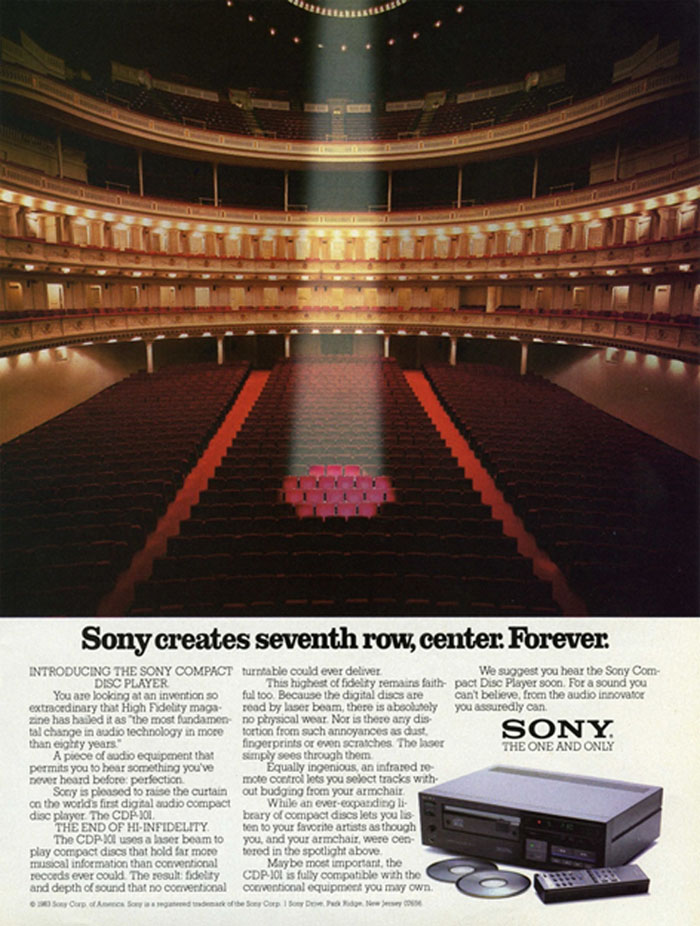 And what about collecting objects?

Lorenz Tomerius wrote that some objects become different based on use and ownership:

"This refutes Gertrude Stein's claim 'a rose is a rose is a rose': that it has become a different object if Napoleon wore it on his uniform. A key is no longer a key if it belonged to the Bastille. A knitting needle is an object with a special aura if Marie Antoinette made it rattle, and a shaving kit will evoke horrible associations if it was once owned by Danton." Lorenze Tomerius, 'Das Glück, zu finden, Die Lust, zu zeigen' (2)

My primary collecting pursuits, however, have never been about any special provenance related to ownership or use. Caruso didn't previously own the Victrola in my collection and I don't own Andy Kaufman's record player with its Mighty Mouse record that he used in the premier episode of NBC Saturday Night, October 11, 1975. (3)

Ever since Edison's invention was first reported in Scientific American on December 22, 1877 the phonograph and recorded sound have been part of popular culture and those aspects of its history are what I enjoy. 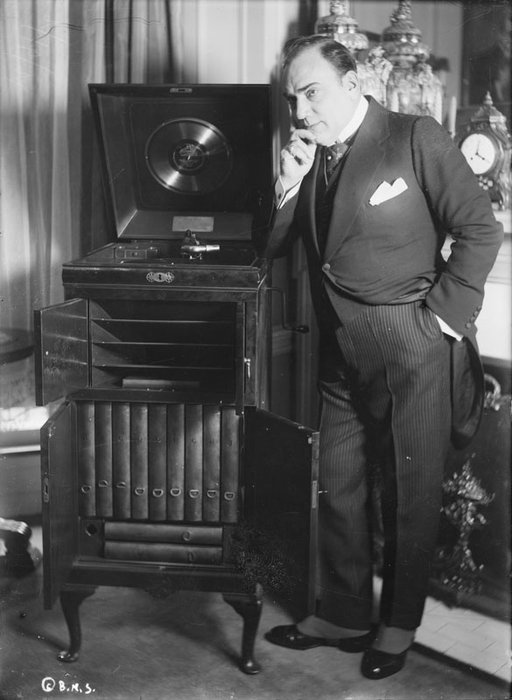 Caruso standing next to his Victrola Queen Anne XIV

I believe phonographia bridge time and that we can glimpse and hear fragments of other eras because relevant objects and stories and sounds have been collected.

Researchers tell us that recognition, one of the two primary forms of accessing memory "is a simpler and more reliable process" than recall. "It is the association of a physical object with something previously encountered or experienced. This could be because tangible memories utilize all five senses, evoking emotional triggers and transporting us back to a precise time, place or moment." (3A)

Although historical phonographs cannot be encountered by us in their own time period, curated objects and stories and sounds related to the phonograph can still transport us to a time that we personally didn't experience.

In a 1995 Syracuse University address about the Belfer Audio Archive, John Harvith said that the Belfer Archive was important because it "allows us to feel this sense of history even more vividly, because we can hear what musicians, artists, authors, actors, statesmen, politicians, and other historical figures actually sounded like. This is emotional, visceral communication that goes far beyond the power of the printed page. (3B)

Seeing a phonograph in a period piece movie is another example of how time travelling to the past can be triggered. If you are watching a movie that takes place in 1903 and you see a gramophone with its open horn sitting on the parlor room table then that time period is 'encountered' and that experience becomes part of your memory. You associate a gramophone to a time and place. Hearing music on that gramophone further enhances that memory and as Harvith summarized in quoting musicologist James Hepokoski, "Music of the past tells us what it felt like to live during the period when it was created." (3C) 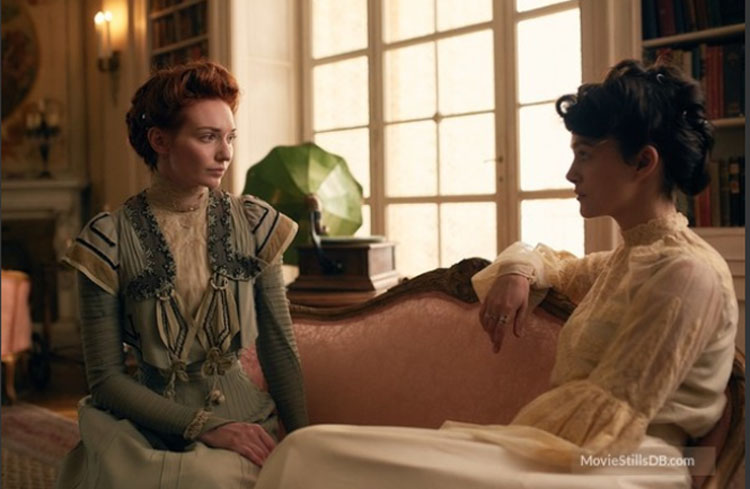 French parlor circa 1903 in the 2018 movie Colette (Courtesy of Bleeker Street, Lionsgate & MovieStillsDB.com)

There are many examples of collectors becoming obsessed in their pursuit of objects. A prominent collector of postcards was once asked how many postcards she had. She didn't give a number but replied Its never enough. Otherwise it wouldnt be called collecting. (3D).

Collecting can take control of our attention and as Ralph Waldo Emerson warned, "Things are in the saddle, And ride mankind."(4)

Consumerism and its associated advertising are about marketing products which often includes attaching status to them by the branding of the product or with its design such as the period piece phonographs created in the teens and 1920's. A 1923 Victor ad stated "people express themselves in their possessions." 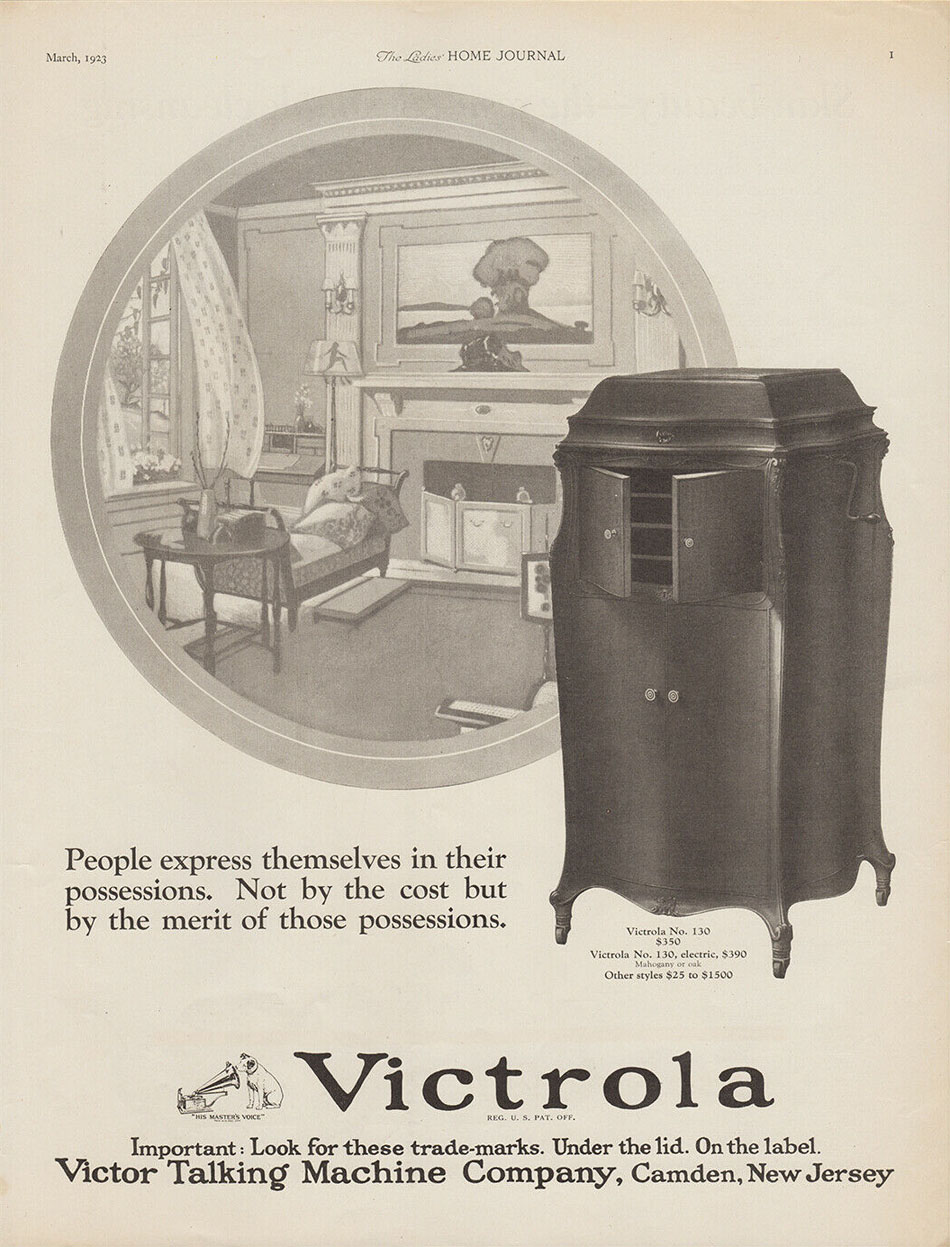 There is also the risk that objects can create illusions that things are more than they are and "that we can forever embrace, and be embraced by, what is forever fading away" (5)

But as the poet Shelley wrote in Ozymandias those things will inevitably disappear:

"Nothing beside remains. Round the decay

Of that colossal Wreck, boundless and bare

The lone and level sands stretch far away."

Nevertheless, I have collected 'things' connected with the phonograph which even include multiple degrees of separation connections such as non-phonograph talking toys and talking clocks.

As an example, children's talking clocks featured pop culture characters from the 1960's to the 1980's and their miniature 'record player' inside each clock provided the wake-up message in the character's voice. These talking clocks were primarily made of plastic, used batteries, and were popular for a few decades with their life-span basically matching the child's interest in that character.

Were children's talking clocks something anyone ever really needed? Were they worth the resources and cost of being produced, marketed, transported and placed in stores, purchased and then added to the landfill? You could also make this same argument against many non-talking clocks but either way would it have been missed if it hadn't been created and promoted?

My answer to each of those questions is "no." A collection of those clocks, nevertheless, is a reminder of what some children in the 1960's and 1970's found interesting and had in their bedrooms for telling them it was time to get up.

I think consumerism in general requires some overall re-examination but it still begs the question: What resources and how much attention do we give something because it is interesting? (8)

In Marilynne Robinson's "Gilead," her narrator says in a letter to his son, "This is an interesting planet. It deserves all the attention you can give it."

To conclude with a major segue, I believe "all the attention you can give" our planet is essential and requires repeatedly asking, like a broken record, if what we are doing is harmful to ourselves and our planet. It requires an examination of our needs, our relationships with the earth and the pursuit of a sustainable planet for every sentient being and life-form.

I also believe what Emily St John Mandel wrote in her novel Station Eleven that "survival is not sufficient."

"Objects" will continue to be made, collected, conserved and preserved because they are part of the human story and have connections with people and reflect priorities.

The primary attention to conservation and preservation, however, needs to now be focused on Earth.

"In wildness is the preservation of the world" wrote Henry David Thoreau. 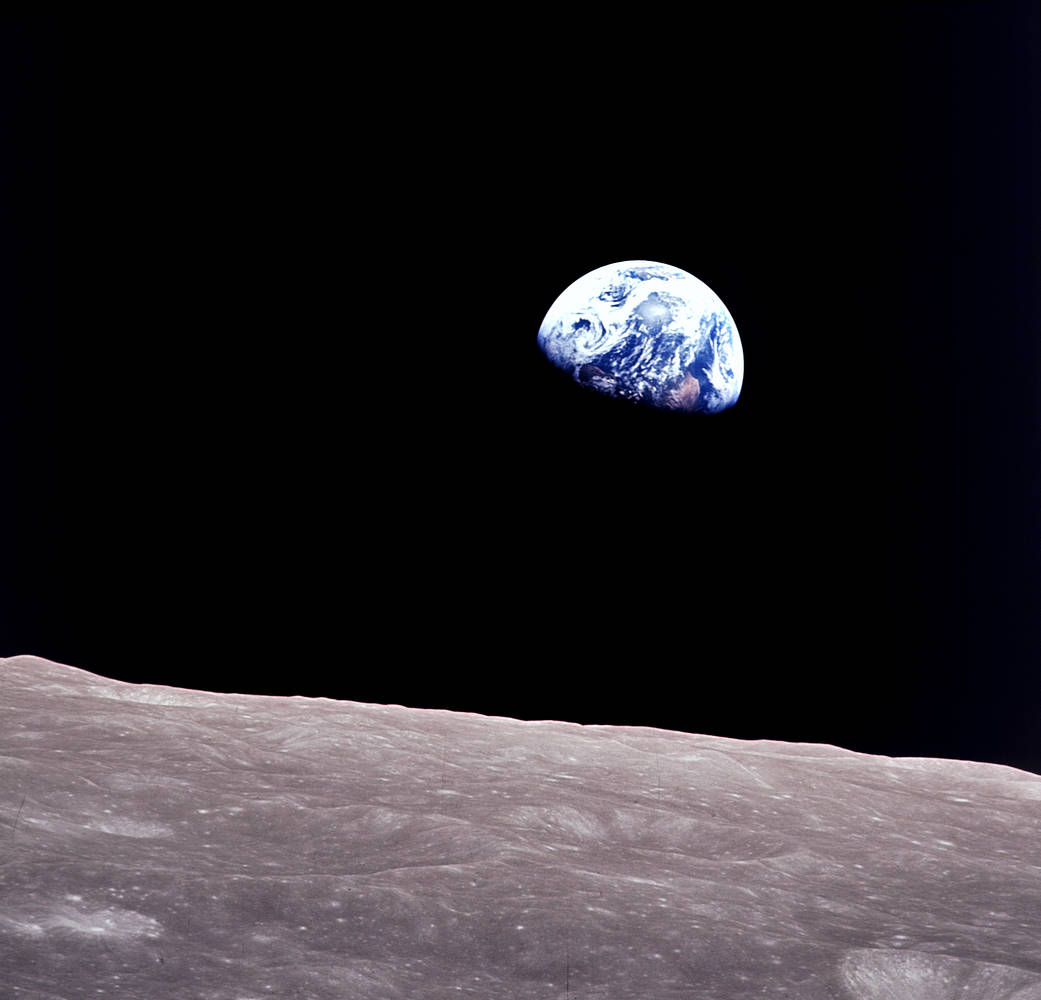 Taken aboard Apollo 8 by Bill Anders, this iconic picture shows Earth peeking out from beyond the lunar surface as the first crewed spacecraft circumnavigated the Moon. Courtesy of NASA

"We all travel the Milky Way together, trees and men....In every work with nature one receives far more than he seeks. The clearest way into the universe is through a forest wilderness." -- "Plant-Patty" (Dr. Pat Westerford) reading John Muir (10) in The Overstory by Richard Powers (11). 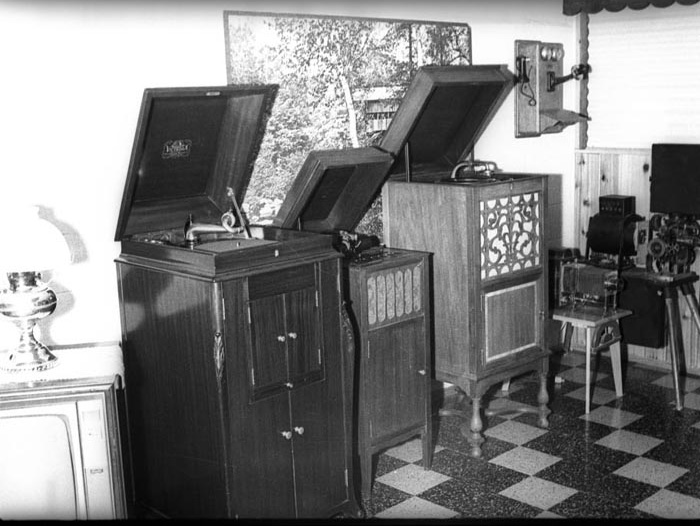 A corner of my collection in my parent's basement 1965. 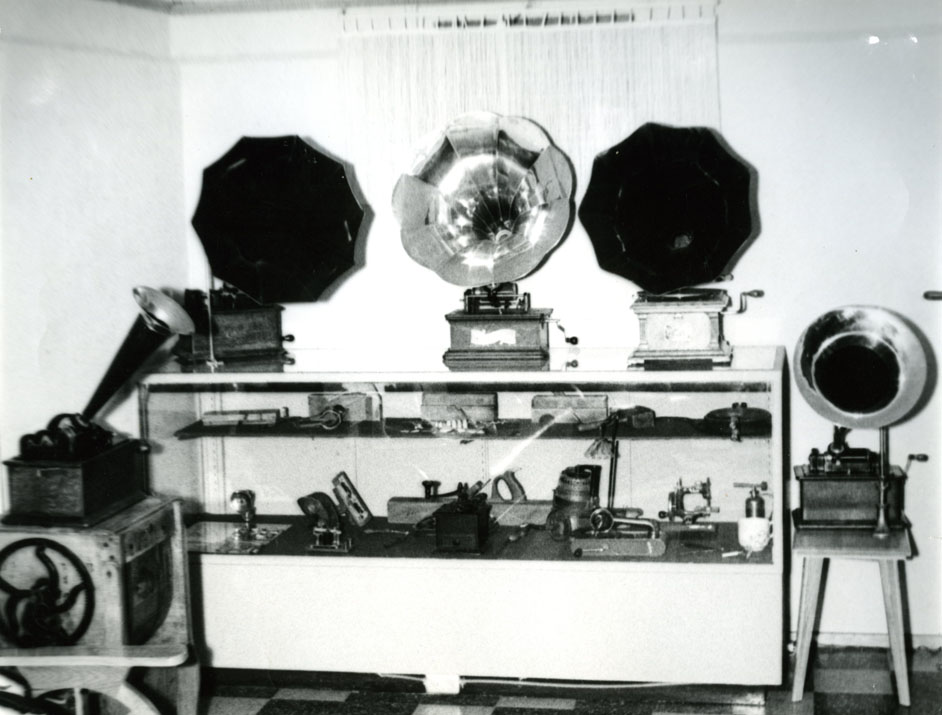 See the Legacy Exhibit for the phonograph display post 2004. 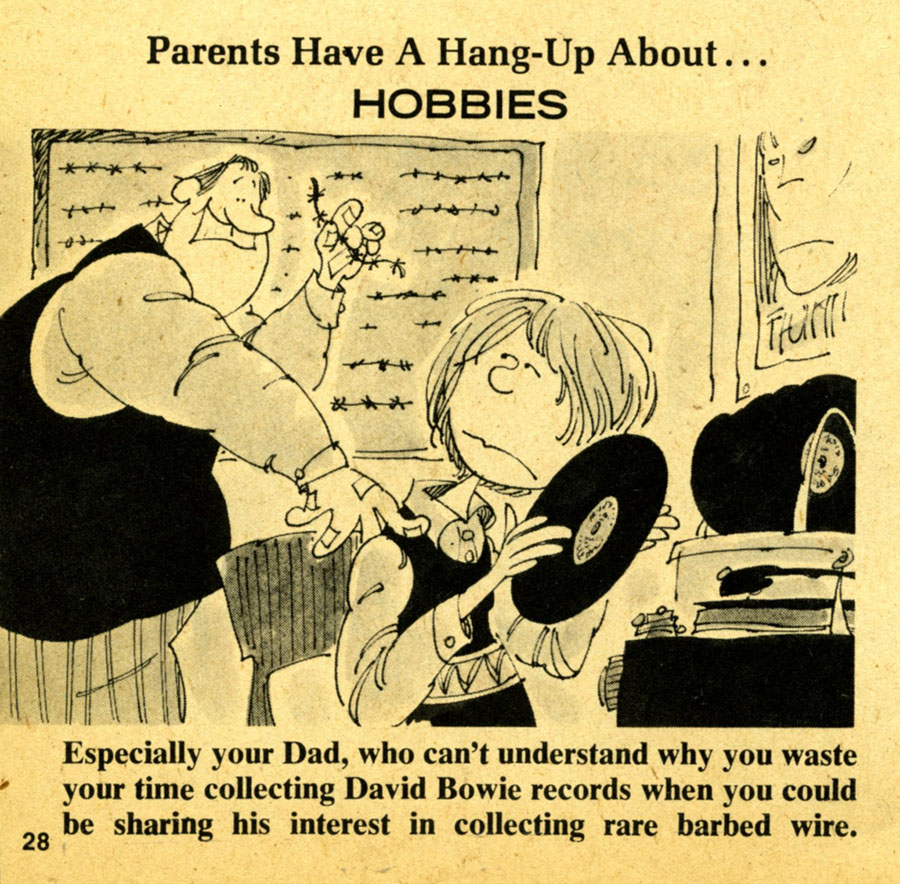 My parents were always very supportive of my collecting, but I love this cartoon from Mad magazine,1982 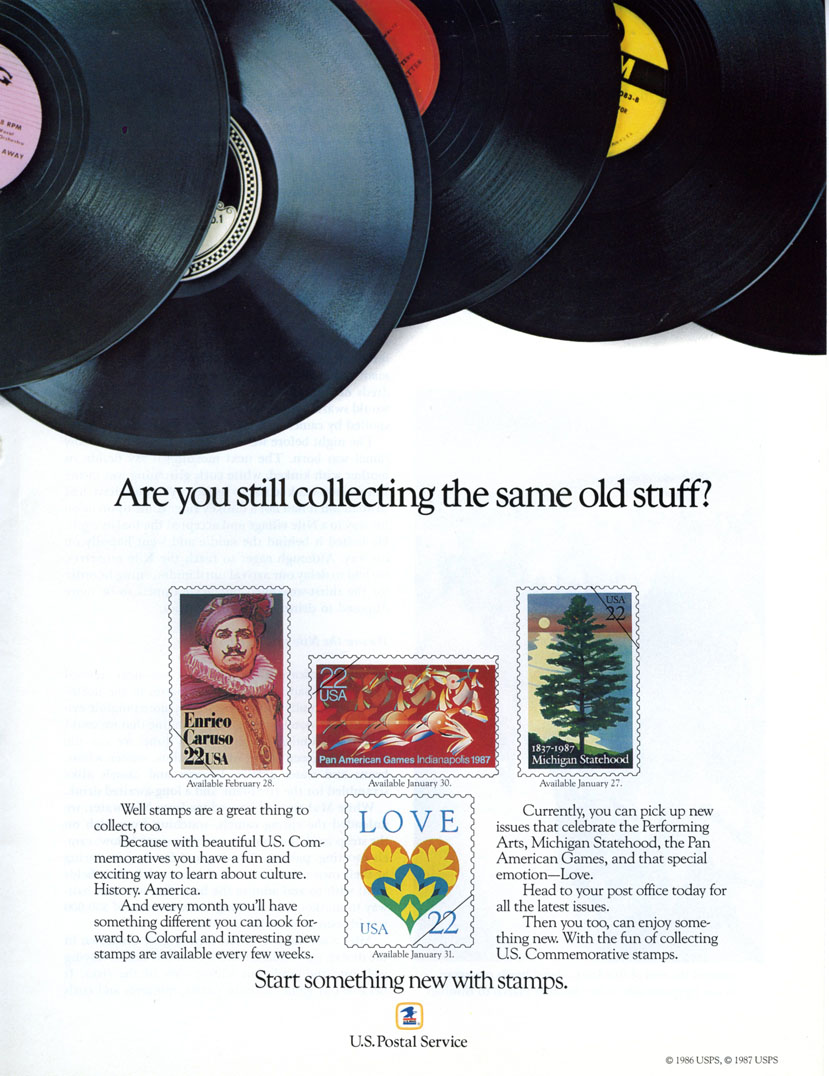 For additional thoughts about popular culture and phonograph connections see Connections and the Creation of an Industry.