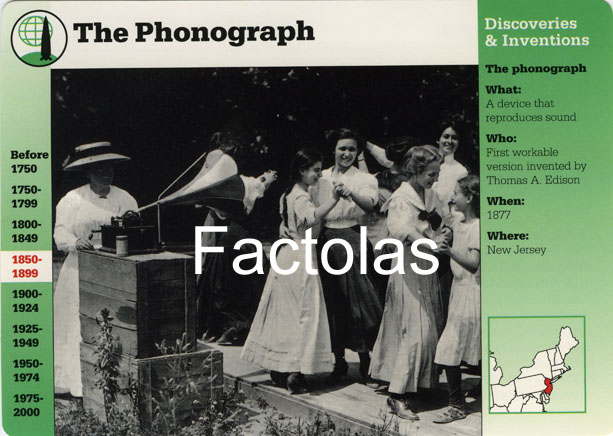 Every gallery in Phonographia has multiple facts connected with the phonograph. Some are identified as factolas. This is their summary list.

FACTOLA 1 The Phonograph changed the human perception of ephemeral sound.

FACTOLA 2 The Phonograph was a machine that started a social and cultural revolution. Records revolved and played "bottled up" music and speech anytime, anywhere and as often as you wanted.

FACTOLA, July, 1879 - The first phonograph used in a United States post office as customer communication support was in Leadville, Colorado.

FACTOLA, November 1888 - The first attempt to record a public speech by means of the phonograph was made Thursday evening at a democratic rally in the Park rink in Orange, New Jersey. Eighteen cylinders were used with 'slight breaks" between changing of the cylinders. The cylinders were said to each last about seven minutes. The portions of the speeches taken were nearly two hours long. The phonograph was operated by Theodore Wangemann and an assistant, both connected with the Edison Laboratory. (probably November 1 or November 8, 1888).

FACTOLA: "between 1915 and 1920 the Edison company sponsored over four thousand tone tests and twenty-five different sets of artists were scheduled to perform more than two thousand tone tests in 1920 alone. The test groups toured towns, large and small, all across America to tout the wonders of the Edison Diamond Disc." (Courtesy Emily Thompson, Machines, Music, and the Quest for Fidelity: Marketing the Edison Phonograph in America, 1877-1925)

FACTOLA: The number of talking machines that used '-ola' as a brand name.

"On This Day" Calendar

Every date identified in the Phonographia "On This Day" calendar is essentially a FACTOLA. The following, however, are FACTOLAS specific to holidays with examples of phonograph popular culture connections made with that holiday.

FACTOLA: Easter and the Phonograph

FACTOLA: July 4th and the Phonograph

FACTOLA: Halloween and the Phonograph

FACTOLA: Thanksgiving and the Phonograph

FACTOLA: December 6 and 25 - Santa, Christmas and the Phonograph

The 'PHONE' and 'GRAPH Brands

FACTOLA: The number of talking machines that used 'phone' or 'graph' as a brand name

FACTOLA: On February 4, 2008, for the first time ever, NASA beamed a song directly into deep space using NASA's Deep Space Network. The song: Across the Universe by The Beatles.

FACTOLA: "THE PHONOGRAPH GIRLS is the first play known in which the talking machine and its commercial environment has figured in a professional way and carrying off the honors." (The "talking machine" used was Columbia's Twentieth Century Graphophone. The commercial environment was a scene inside the interior of a phonograph store). The Talking Machine World, October 15, 1906 - (Source: The Phonograph Girls)

FACTOLA: The "BC" Columbia Graphophone was used by the Cameraphone Company in 1908 to combine recorded sound with moving pictures. A performer "speaks, and the words come from the Graphophone in perfect accordance with the movements of his lips....He sings his song with every appropriate gesture, the word words and music all the while coming from the Graphophone." One of the most successful of the combined songs and moving pictures is the famous "Smile, Smile, Smile" from Lew Field's latest production..." (Source: May 1908 The Columbia Record trade journal and courtesy of The Antique Phonograph Monthly). - (Source: The Phonograph Girls)

FACTOLA: "The Judge," an English play in 1890 used a phonograph "to provide the sound effects of a crying infant from off stage." This is believed to be the first use of a phonograph in a supporting role of a stage play. Source: "Edison in Hollywood" by Allen Koenigsberg, The Antique Phonograph, June 2016.

FACTOLA: "The Higham Reproducer, invented by Daniel Higham, was used in Higham's talking machine named the High-am-o-phone and was displayed at the St. Louis World's Fair in 1904 as part of the exhibit of Columbia Phonograph Company records and machines. Higham's machine was noted on the exhibit's inventory sheet as "the loudest sound -reproducing machine in the world." (Courtesy APM 11:1, Allen Koenigsberg and Doug DeFeis).

FACTOLA: Yesterday by the Beatles - The most covered song in recording history"

FACTOLA: The album cover The Present by The Moody Blues is an example of double cover art. First it's an album cover for a vinyl record. Second it's an artwork 'cover' since it'ss based on Maxfield Parrish's 1922 painting Daybreak.

FACTOLA: The longest playing single on a 45 RPM record is the live version of Incident on 57th Street, B-Side of the Bruce Springsteen 45 RPM Fire, at 10 minutes and 3 seconds.

FACTOLA: Original recording of Hound Dog was by Willie Mae "Big Mama" Thornton on August 13, 1952, in Los Angeles and released by Peacock Records in late February 1953.

FACTOLA: For her closing remarks in the 2008 Vice Presidential Debate (Biden vs. Palin), Sarah Palin paraphrased Ronald Reagan. The source of Palin's words were from a 1961 Reagan phonograph record titled Ronald Reagan speaks out against Socialized Medicine.

FACTOLA: Eddie Deezen, author of The Ambiguous History of the Hokey Pokey, concludes that the "earliest accurate record, so far, of the song we all know and love is from an account, dated 1857, of two sisters from Canterbury, England, on a trip to Bridgewater, New Hampshire...During their visit, they taught the locals a song that went something like this: "I put my right hand in, I put my right hand out, I give my hand a shake, shake, shake, And I turn myself about." Apparently, the performance of the songcalled "Right Elbow In" and several verses longwas accompanied by "appropriate gestures" and was danced with a slow, rhythmic motion."

Recorded humor allowed the public to hear what they otherwise would not hear.

Recorded humor could be heard by other comedians and then be copied, adapted or used to improve their own skills and style.

FACTOLA: Furthest Distance from Earth a Record played on a turntable - The Icarus and Third Man Records - July 2, 2016.

Phonograph Connections with the Sewing Machine

FACTOLA about Charles Batchelor's connection with the sewing machine industry:

Mr. Charles Batchelor (who would become Edison's chief assistant at Menlo Park and who stands next to him in the photograph taken by Mathew Brady in April 1878 of Edison with his tin-foil phonograph) was a very skillful mechanic who was sent "from England to superintend the setting up and adjusting of the automatic thread machinery for the Clark Thread Works."(1A)

The Phonograph and its Future: Speech and other Utterances

FACTOLA: In the 1908 Bryan vs. Taft Presidential Election for the first time everyone had the means to hear the "exact words" of each Presidential candidate. "Now, for the first time, one can introduce the rival candidates for the Presidency in one's own home, can listen to their political views, expressed in their real voices, and make comparison." The Edison Phonograph Monthly, September 1908

Evolution of a Revolution

FACTOLA: The first nickel-in-the-slot phonograph was installed November 23, 1889, by Louis Glass inside the Palais Royale Saloon in San Francisco.

FACTOLA: The tape cassette (a.k.a. compact cassette) was introduced by the Dutch company Royal Philips in September 1963.

FACTOLA: The Magnavox Magnavision model 8000 was the first reflective optical videodisc player to be released to the general public on December 15, 1978 at three stores in Atlanta, GA. (Courtesy LaserVision Landmarks)

FACTOLA: In 2015, for the first time, streaming became the largest component of industry revenues, just slightly higher than digital downloads.

Monopoly and the Gramophone

FACTOLA: In January 2017 Monopoly puts its eight tokens to an Internet vote asking what game pieces were worthy. All were on the table from its current classic pieces to more than 50 new options including a gramophone. The vote was conducted, however, the gramophone failed to get the needed votes. Three classics also lost: the Thimble, the Boot, and the Wheelbarrow.

The Phonograph Lives! - The Voyagers

FACTOLA: Voyager 2 is a space probe launched by NASA on August 20, 1977 which now travels in interstellar space carrying a phonograph record that is Earth's "message in the bottle" and "greetings from Earth."

FACTOLA: Voyager 1 launched on September 5, 1977 and like Voyager 2 is now travelling in interstellar space carrying a phonograph record that is Earth's "message in the bottle" and "greetings from Earth."

FACTOLA: Voyager 1 and 2 were launched within months of being exactly 100 years after the invention of the Phonograph by Thomas Alva Edison. Both carry their "Golden Record" that is designed to play audio at 16-2/3 RPM using a phonograph needle and also display images from the grooves of the record. The images, sounds and music on the Voyager's "Golden Record" are intended to represent life on planet Earth.

FACTOLA: The "Golden Record" may never be played. But there is still the mind-bending possibility that the Voyager record will exist longer than humans on Earth.

FACTOLA: On April 22, 1978 NBC's Saturday Night Live did a skit "Next Week in Review" which reported what would be the biggest news story of the year, namely that "a foreign planet" had sent a message to Earth "the FIRST positive proof that other intelligent beings inhabit the universe." They apparently had found the Voyager spacecraft, listened to its Golden Record and had now communicated four words to Earth: Send More Chuck Berry.

FACTOLA: On June 29, 1888, Handel's Israel in Egypt was recorded at The Crystal Palace in London, the earliest known recording of classical music.